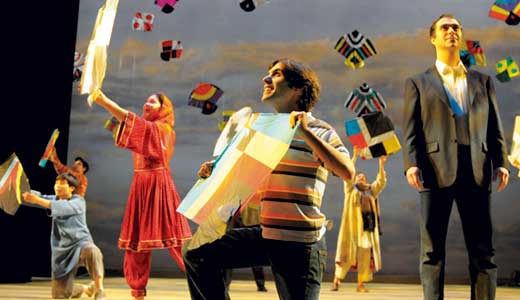 We live in what will someday be viewed as the Golden Age of Adaptation.

But in the history of Western civilization, every great creative epoch — from the flowering of Greek tragedy, to Wagner’s operatic interpretations of ancient Norse tales, to the miraculous improvisations John Coltrane blew over the chords to “My Favorite Things” — has had its roots in the art of adaptation.

A work like “The Kite Runner,” Khaled Hosseini’s 2003 novel of friendship, betrayal and redemption, would seem an unlikely candidate for theatrical adaptation. The story sprawls across time and space, and as a best seller that’s been adopted by thousands of book clubs and adapted into a major 2007 film, it’s one of the most familiar novels of the century. But for Marc Masterson, whose directorial vision of Hosseini’s tale opens this week in the Pamela Brown Auditorium, staging “The Kite Runner” represented an opportunity to explore live theater’s unique ability to reinvigorate twice-told tales. “It’s a powerful human story with a universally important theme of redemption,” Masterson says.

“The Kite Runner” has its roots in an Afghanistan that’s been roiled by a Soviet invasion, the rise of the Taliban and decades of violent disorder; but for Masterson, it’s fundamentally an American story, told by a protagonist whose life has been shaped by bitter regret over a youthful incident, but whose adult worldview is transformed by formative years in the United States. “It’s the story of an immigrant who goes back home in order to right an old wrong,” Masterson says. “And though the story has an epic sweep, its emotional core is extremely personal. And seeing it played out on the stage is much closer to the experience of reading the book than seeing it on a movie screen. In the theater, a viewer’s imagination fills in the details, just as it does when reading. It’s an experience that pulls people into the story and lets them enrich it with their own vision.”

That’s not to say this isn’t a richly conceived production. Masterson’s is only the second professional production of playwright Matthew Spangler’s adaptation, which premiered last year at the San Jose Repertory Theatre. (It won a handful of awards from the Bay Area Theatre Critics Circle for Outstanding Production, Original Script, and Sound, Lighting and Set Design.) There’s a lot of interest in the play from companies around the nation, notes Masterson, but it’s an expensive piece to produce. In an economy where theater companies are focusing on plays that can be mounted on a budget, “The Kite Runner” requires a large cast and a significant investment in sets and costumes. Thus, the Actors production was assembled in partnership with the Cleveland Playhouse (where the play will transfer after its Louisville run).

“Throughout its history,” Masterson says, “Afghanistan has been a cultural crossroads situated on the trade routes that connect Europe, Asia and the Middle East.” Casting a play that captures that diversity was both a joy and a challenge, and Masterson says he found an outstanding group of players, some with backgrounds in that part of the world, some without. “It’s an integral part of the actor’s craft to inhabit other worlds,” Masterson says. And to that end, he brought in a cultural consultant to help the cast explore the context and customs that inform the world of the play.

To complete the scenario, Masterson ensured that audiences would have a rich aural experience as well. Throughout his career at Actors, he’s been fascinated by the interplay of music and drama. (A few years ago, he commissioned Louisville musicians Jason Noble, Christian Frederickson and Greg King — aka Young Scamels — to create the soundscape for Actors’ production of Shakespeare’s “The Tempest”; their extraordinary music is slated for release next month on File 13/Carrot Top Records.)

For “The Kite Runner,” Masterson brought in acclaimed tabla player Salar Nader, who composed and performed music for the San Jose production, to furnish live musical accompaniment. “His musical language makes an eloquent counterpoint to the action of the play,” Masterson says. “Even people who know the novel and film quite well will find this a different kind of experience.”