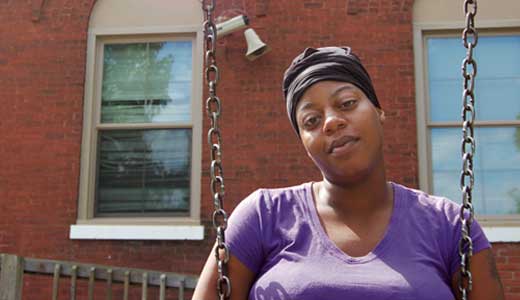 When the water pipes burst in Leann Deramus’ apartment, she didn’t expect her family to live ankle-deep in water for over a week.

“Eventually, my landlord just put a fan in the room to try and dry it out,” says Deramus, 26. “They didn’t pull up the carpets or anything, and of course it got moldy after that. When the health department came to do the inspection, they were like, ‘Nope, we’re condemning it. Y’all got to go.’”

So Deramus and her three children — ages 4, 7 and 9 — packed up their salvageable belongings and left their 124-unit Okolona apartment complex in January to live with friends. Up to that point, Deramus had been unemployed for nearly five months, having been laid off in August 2009 from a well-paying telemarketing gig. She had tried contacting local emergency shelters so as to not burden her friends, “but the shelters were always full every time I called,” and the unemployment money she was collecting wasn’t enough to afford a new apartment.

Since January, the family has stayed at the homes of four different friends, and as of last week they had to move again, this time becoming clients of Volunteers of America’s Preston Street Family Emergency Shelter, their fifth temporary home in nine months.

“It’s been a fairly easy transition,” Deramus says, “thanks to (the staff) and the school coordinating together to get the transportation set up. (My kids) didn’t have to switch schools or anything, so they didn’t have to worry about making new friends. When I first got here, I was like, ‘Oh my god, how am I going to get them back and forth to school?’”

Deramus’ oldest children attend Zachary Taylor Elementary — 15.6 miles away — and represent just two of the 10,550 homeless children currently enrolled in Jefferson County Public Schools, which has seen a 215 percent increase in the number of homeless students since 2004. Consequently, the school system has gotten better at dealing with this burgeoning population with the formation of the Office of Homeless and Migrant Education, which specializes in providing transportation and other services to students in dire need.

“All I had to do was contact (JCPS), and they told me about the Homeless and Migrant program,” Deramus says. “They said, ‘We’ll pick them up at the shelter that you’re staying in and drop them off there as well, and take them directly to the school.’

“It’s been a big relief,” she adds. “It took a lot of pressure off of me not having to find my own transportation or even to switch my kids’ schools.”

The recent release of Kentucky Youth Advocates’ 2010 Kids Count Data Book highlights the economic realities facing families like the Deramuses: The number of children living in poverty in Jefferson County has increased — 30,604 in 2000 to 36,677 in 2008 — while median incomes have risen from $39,457 to $46,745 over the same time period; children enrolled in Medicaid has jumped from 38,706 in 2000 to 62,210; and WIC benefit enrollment has increased by 15 percent.

In fact, the data book — available for free download at www.kyyouth.org — suggests that so much misery is being experienced by Kentucky’s poor, working-class and minority children that the easiest way to analyze the numbers is to examine what hasn’t gotten worse with them: Namely, child and infant mortality rates have decreased from 9.8 to 6.7 (per 1,000) and from 32 to 22 (per 100,000), respectively.

But of all the myriad data contained in the book, the numbers reflecting Louisville’s lack of affordable housing are the most telling when it comes to child homelessness.

“Our kids are here for the most part due to a lack of affordable housing,” says Jayne Harbin-Pettit, Transitional Housing Program manager for Volunteers of America, “and that is one thing that we’re always talking about.”

According to the data book, roughly 42 percent of renter households in Kentucky have incomes too low to comfortably afford the cost of a two-bedroom, market-rate apartment. Despite the federal HOPE VI initiative, which seeks to replace urban renewal-era housing complexes (not unlike Deramus’ flooded apartment) with “mixed-income” public-private housing developments, the number of homeless children (and parents) has increased as the recession rolls on.

“Most of our people, when they come in here, they’ve got a job, they’re working,” says Harbin-Pettit. “They’re just unable to meet the market rate now and buy food for their kids. Our people are working, they’re doing what they need to do. They just cannot afford to live. We’ve had quite a few people come through here that in the past were making a very good wage and lost their job because of downsizing.”

Harbin-Pettit adds that, anecdotally, this “seems to be” a trend that’s only been exacerbated by the recession, and data from the Family Emergency Shelter corroborates her observation. In May 2009, the average length of stay for a family at the Volunteers of America shelter was 25 days. As of May 2010, the average stay jumped to 59 days, even as the number of families they’ve served has slightly dropped.

Of her children’s response to life in transitional housing, Deramus says, “They’ve taken it better than most, because I’m kinda open with them. I explain the situation to them. I don’t keep them in the dark about what’s going on. But it’s been hard on them… ”

The young mother begins to cry.

“It’s a little emotional,” she continues. “I used to be able to give them everything: a stable environment, a place to sleep… It’s just hard when they’re like, ‘Mom, when are we going to go home; where’s all our clothes?’ Because when the apartment flooded, we lost all of that, the furniture, most everything… ”

Despite the economy’s refusal to improve, Deramus remains optimistic about the future. Eventually, she wants to go to school and earn a degree that will help her achieve her ultimate goal of opening a retail business on Bardstown Road.

In the meantime, 250 workers from JCPS, Family Court and the Louisville Metro contingent of the Kentucky Department for Community Based Services will convene Sept. 17 in a first-time effort to combat “the exponential rise of homeless children in these systems and how to improve these major systems working together,” according to a press release from the Metropolitan Housing Coalition.

And Deramus’ children — who’ve so far only missed one day of class during this period of upheaval — will continue making her life easier.

“They’re adjusting. They’re adapting,” she says. “They’re used to sharing a room anyway, and of course their school is still the same. They just don’t get to be like, ‘Momma cook this,’ you know, but they’re eating good, they’re well taken care of, they’ve got a nice shower here, a warm bed. It’s cool.”