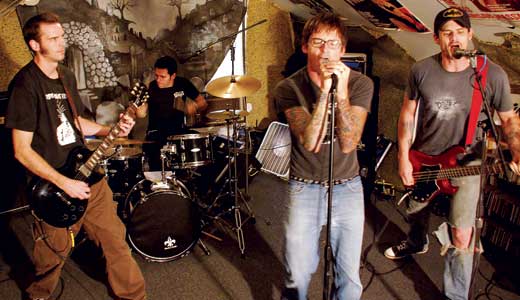 By the time they offloaded their amps from Cherokee Blues Club in October 1994, Indignant Few had spray-painted its name into the city’s punk record. Whether the scene cares to admit it is another question.

Singer Morgan Keator, bassist Kyle Blust, guitarist Ren Gardner and original drummer Jeremy King formed the band in 1990 out of a mutual love of early ’80s West Coast and British punk rock, and of groups like Fear and Anti-Nowhere League.

Onstage, their reputation was, in hindsight, quite typical: young, loud and snotty, an exercise in bratty reverse psychology that today would come off as ordinary, contrived and derivative. Louisville audiences, who were nurturing a love affair with post-hardcore music at the time, wanted none of it.

“It was the time of the unidirectional-named band: Endpoint, Falling Forward,” says Blust, now a mechanic in Seattle. “Our attitude was: OK, you all hate us? We’re going to make everyone hate us.”

Blust had no qualms about wearing a balloon skirt, nor did Keator about wearing a black dress. Tone and precision be damned. It was about fun, release and not being electrocuted: “We played at the Bar With No Name (now the Grape Leaf), and their system wasn’t grounded properly,” Blust says. “My lips touched the mic, my knees buckled and the fluorescent lights dimmed.”

Not everyone was amused: New York act Crawlpappy, who was on tour at the time, unplugged the Few’s equipment mid-set and told them to leave. “We did,” Blust says. “And so did everybody else.”

Ironically, talk of a reunion came up following Endpoint’s May shows at Headliners, but Keator was reluctant to perform it alone, so he called around to Better Days label-mates Bush League, Son of Dog and label owner Ben Jones. To Keator’s surprise, all parties came on board.

It’s unlikely the Few will record new material or perform after this show. Gardner is a legal researcher, and Blust is on the West Coast. King is full-time in Parlor Tricks, while Keator plans to start a new project. Saturday’s Vernon show is 21 and over; Sunday’s concert is all ages.