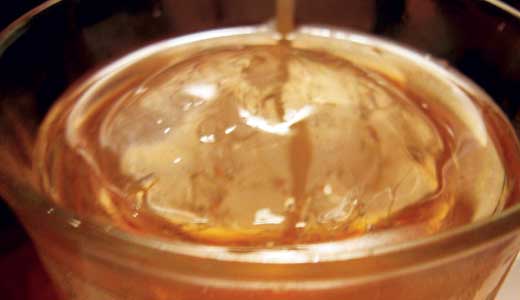 I don’t go to bars. I go to bartenders. —Dale Degroff *

All the makings of a Hunter S. Thompson story, I said to Jared Schubert, a Louisville bartender and recent enrollee in the event’s Cocktail Apprentice Program. Sensing my interest, Schubert mentioned that he was still looking for someone to ride shotgun. The offer intrigued me for days. Shortly after learning that I’d applied too late for “Tales” media credentials, Schubert called to say he’d found impossibly affordable accommodations for part of my trip. He advised me not to worry about the press creds — his friend from the Boston Globe says the unsanctioned parties alone are worth it.

This is indeed part of Schubert’s skill set. He also possesses a conman’s charm and penchant for mirth that can induce lightheadedness. These are some of the reasons I drink where he serves — Village Anchor Pub — and why I decide to trek down to that other fleur de lis: no money, no press pass, incomplete accommodations and, to this point, a lukewarm response from editors. When someone like Schubert promises adventure, my inclination is to hold the map.

What follows is the ferment of my pursuits in New Orleans. The aim of this abridged journal is to chart Louisville’s standing among renowned drink-making cities, provide a sampling of what’s next in the ongoing cocktail resurgence, and to shine a light on some of the local personalities who affect the way we imbibe.

Our first stop in New Orleans is the Hotel Monteleone’s Carousel Bar, the leaping-off point for much of what happens at “Tales of the Cocktail.” Schubert and I join the slowly rotating bar and find noted cocktail personalities from across the country. Everyone seems to know everyone, so it takes little time for the room to get loud and happy.

The one exception is the poor soul tending bar. He’s good at what he does, but among this clientele, is something of a misfit. His lack of visible tattoos, Impressionist necktie and one-size-fits-all vest are part of this. What is truly unfair, though, is how he’s peppered by experts from 360 degrees — questions about drink specs, riffs on flavor profiles and orders for labor-intensive classics. After he rattles off the short bourbon list, one aficionado quips, “Where are we, McDonald’s?”

With this, the gifts Schubert brought from home come into play. You could almost hear his trunk clinking when he pulled up this morning, as it was packed with unique-to-Kentucky gems like Ancient Ancient Age, Heaven Hill Bottled in Bond and an exclusive Old Fitzgerald. These sub-$20 bourbons are cherished by Schubert’s friends from other cities and help us make some new ones.

In this community, I come to learn, Kentucky gets respect — so does Louisville. Spots like Chicago’s The Violet Hour — one of Condé Nast’s Best Bars in the World — have always played big brother to Louisville upstarts, welcoming people like Schubert and 732 Social’s Larry Rice to the point of sharing trade secrets. Today, word is that Louisville is standing on its own.

I’ll later meet Freddie Sarkis, a member of this Chicago contingent who says he now looks for the slightest excuse to come down and hit our bars. “A Louisville buddy needs help moving a couch, I’m there,” Sarkis jokes.

As Kentucky’s finest circulates around the carousel, flasks begin to appear with no apparent objection from the house. I’ve never seen the inmates take control like this. I’m passed a rather delicious liqueur called MOF, or Cuvee Meilleurs Ouvriers de France, or “angel tit milk,” depending on whom you talk to. I find out MOF is a variation of yellow Chartreuse, made by French monks and not sold in the United States. The other thing I discover is that artisan bartenders rarely put anything normal in their flasks.

If it’s not Chartreuse, it’s Mezcal — a smoky cousin of tequila. If it’s not Mezcal, it’s Fernet, a bitter spirit distilled from a litany of ingredients like myrrh and cardamom. “Tales” hasn’t even started yet and already my palette is being stretched in more directions than I thought I wanted. As I explore more tastings and seminars in the coming days, these ingredients surface with regularity and appear to have already permeated the next wave of craft cocktails.

It’s well after midnight when a group of us spill out of the Monteleone. A man with breasts promptly calls me a sissy. It’s not an insult, merely an inducement to enter the club where he works. Somehow, we decline. The streets are still buzzing, and there’s a thrill each time we turn a corner. If you’d missed the last five years of headlines, it would be difficult to tell that this city is still wrestling a two-headed monster. What is evident, though, are those post-Katrina reports of New Orleans’ irrepressibly festive spirit — even late on a Sunday night in the blistering heat of summer.

Larry Rice and Michael Padgett (of 732 Social) arrive in the nick of time. Schubert has since vanished into the guts of the Apprentice Program, and with “Tales” in full swing, the Hotel Monteleone has become a Macy’s for binge drinkers. It would be easy to spend the workday browsing aimlessly from the Suntory Tasting Room to the St. Germaine station to the Brugal Rum demo with those girls in giant headdresses. Unsure why a Dominican product would use what appear to be Brazilian costumes, I innocently ask Lexi and Tiffany, “So, what are you guys?”

It’s a relief when I’m later whisked off to the sold-out Diageo Happy Hour, a sort of living museum where industry rock stars prepare cocktails from different decades. It’s staged in the majestic Cabildo, site of the Louisiana Purchase, and exactly the type of event I’ve been in search of since my arrival. Rice and Padgett seem undeterred by the fact that none of us have tickets, so I decide not worry either.

We’re soon dipping under a security tape and blending in with a group of caterers. On our way up a back staircase, I think about all the time I’ve wasted, chatting up stone-faced girls with clipboards and failing to get into events. Within seconds, David Wondrich, author of “Imbibe!” and a minor hero, makes me something called a Slow Painful Screw. The molecularist Eben Freeman hands me a plastic spoon containing a granulated rum and Coke. I meet Toby Maloney, who, according to Rice, has taught everyone at the aforementioned Violet Hour. This, by extension, makes Maloney a godfather to Rice, Padgett and anyone “behind the stick” at 732 Social.

Josh Durr, a Louisville beverage consultant, also is working, shaking an updated Mai Tai he calls “Don the Distiller.” I’m a little worried about Durr’s arm. Something appears to be eating his wrist, and no one can figure out what. My sci-fi musings are later dashed when a professional diagnosis comes in: phytophotodermatitis, or “Margarita Dermatitis.” The condition is brought on by excessive exposure to lime juice and intense sunshine.

Will Margarita Dermatitis replace the gout incident as next year’s cautionary tale? These folks who work “Tales” really do risk life and limb. We talk about the hours Schubert is putting in at the Cocktail Apprentice Program, and Rice seems unsure why someone as accomplished as Schubert would bother. It’s a question I remember to ask Schubert, who by now has found a new gear. He admits that at first, the late parties, early call times and endless lemon and lime juicing were killer. But he’s made some solid connections and has already been offered a good job in Portland, Ore.

I’m happy for Schubert, but for Louisville’s sake, hope he turns the offer down.

Sarkis, along with Rice and Padgett, have been asked to carve up a block of Mendenhall Glacier by former Alaskan Nathan Lutchansky. The ice is actually closer to 400 years old, but still does a fine job of chilling Four Roses, the Kentucky bourbon that’s sponsoring the event. I ask Lutchansky, a spirits writer, about procuring the block, and he claims to have harvested it himself while visiting his parents in Juneau. He promises me that removal of glacier from a melt lake is permitted by the Forest Service and, in this case, cost about $200 to ship to New Orleans.

The trio’s finished product is ice spheres that are about the size of an orange and fit neatly into an Old Fashioned glass. Because the glacier was formed from crushed snow that froze slowly over time, the white air pockets typical of everyday ice cubes are noticeably absent, resulting in something that resembles a ball of crystal.

Since hearing Toby Maloney say “ice is the bartender’s oven,” Rice has worked toward becoming a specialist in this department. Watching him lovingly chip away at the glacier, I feel a bit lucky that on almost any night of the week in Louisville, I can enjoy something similar, though not nearly as old. The evening provides one of my favorite “Tales” moments — a brief instant when people stopped chatting, bloggers stopped blogging, and the mesmerized room quietly watched three men chip ice. It’s the part I think I love most about this movement — the patience, the care and the appreciation for craft that can sometimes exist on both sides of the bar.

*From a recent interview in the trade magazine Mutineer. Degroff is widely credited with sparking the classic cocktail revival in New York’s Rainbow Room, c. 1987.

Louisville’s Bartisans: Local bartenders talk the art of the cocktails