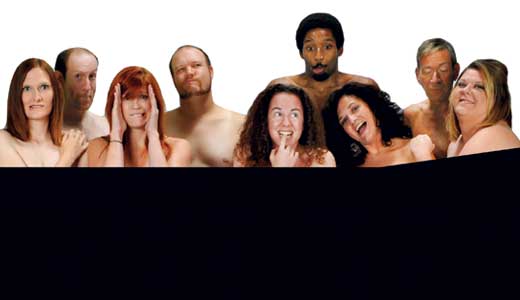 Formerly Bloomington-based songwriter Michael Klinge, who’s toured nationally as a solo artist and as frontman for the late Pious Companion, has resettled in the San Francisco Bay Area. He’s been serving his dusty California folk-rock magic up with six other like-minded friends and beating clear paths of off-the-cuff goodness up and down the West Coast. Their cosmic country, mixed in with a Midwestern sensibility, earned them slots with Avett Brothers and Beachwood Sparks. TV Mike is strictly tri-state going into this Labor Day weekend, touring on his new CD, Spittin’ In Cursive. Jonathan Glen Wood opens. —Mat Herron

Mitch Fatel has one of the freshest, most unique voices in comedy. From the stage, he projects a soft-spoken naiveté so his off-color jokes don’t seem quite as off-color. “I never really wanted to grow up, so what I am onstage kind of personifies the most innocent part of me not wanting to grow up,” Fatel says. “I think that’s what a lot of people should be doing on stage — accessing their inner child.” His DVD, “Mitch Fatel Is Magical,” is still a best-seller on Amazon, and his album, Miniskirts and Muffins (which he says is his favorite of all his work), is still a best-seller on iTunes. After appearing on satellite radio, Comedy Central and every other major media outlet, Fatel is returning to The Improv this weekend. Go to www.leoweekly.com for our full interview with Fatel. —Brent Owen

Ah, the high school career counselor — was yours a kind, supportive cheerleader, or did she mercilessly rip your dreams right from your young, hopeful heart and crush them into the cold office floor? Did she, perhaps, tell you the only career path you could ever hope to venture down is that of plumbing, chicken farming or selling gardening supplies? And that the day pigs fly is the day your dream of being a performance artist will be realized? Such is the story of our hero, Howard Crabtree, in Pandora’s season kick-off, “When Pigs Fly.” This dream-autobiography musical is the very show Howard left home to perform, contrary to what the dream-crushing career counselor, Ms. Roundhole, tried to tell him. —Jane Mattingly

We should’ve known that when Horseshoe Casino got around to bringing in a “name” chef to put in an upscale buffet, they’d do it with the right blend of celebrity glitz and community service. So on Friday morning, there’ll be a royal visit by The Queen of Southern Cuisine, cutting the ceremonial ribbon to launch her newest Paula Deen Buffet. It’s all part of a morning with events to benefit Blessings in a Backpack, an organization devoted to improving children’s lives and education by seeing that they get enough to eat. Deen will start the morning stuffing backpacks at S. Ellen Jones Elementary School in New Albany — then it’s on to the casino. At 11 a.m., there’s an opportunity to have lunch with Deen over her new namesake spread. Call in advance for a reservation — they’ll ask a steep price for peach pie, but the proceeds will help curb childhood hunger. —T.E. Lyons

Once again this Labor Day weekend, Louisville will have the whole world in its hands. World Fest returns to the Belvedere Friday and Saturday with live music and a boatload of cultural experiences from around the globe, including international music, dance, food and crafts. Enjoy music on three stages, from German to Irish, Latino to African, and much more. There also will be cooking demonstrations with a wide variety of world cuisine, booths and demonstrations aplenty, and children’s story-time hosted by the Louisville Free Public Library. And if you want to get in on the fun and represent your sister city or home country, sign up for the Parade of Cultures, which takes place both days at noon. It all kicks off Friday at 11 a.m. with an opening ceremony featuring Mayor Jerry Abramson. A Naturalization Ceremony will be held at 1 p.m. at the Kentucky Center. —Kevin Gibson

‘An Adult Evening of Shel Silverstein’

Wayward Actors Company’s new show comes with a warning: “This is not ‘The Giving Tree’ or ‘Where the Sidewalk Ends.’ It is Silverstein’s darker side and definitely for adults only.” Now that we have that out of the way, here’s what you can expect: ribald and darkly funny sketch comedy written by the beloved Shel Silverstein.

“I was first intrigued by this darker side of Silverstein, having known only his children’s works,” says Wayward’s Grace Poganski. The idea had been tossed around for a while, she says, and finally director Kevin Butler stepped up to the plate. —Sara Havens

‘In the Pink Room’

The tagline for Jeaneen Barnhart’s sexy new show is “No peephole necessary.” Her exhibit, “In the Pink Room,” up this month at the Tim Faulkner Gallery, features 11 sketches of sultry, sometimes scantily clad women — quite a leap from the equine art she is most often known for.

“I wanted to reacquaint myself with life by leaving my imagination behind and focusing on the pure sensual expression through the candidness of pose,” she explains. The opening reception is Thursday, Sept. 9. Blindfolds and whips optional. —Sara Havens

Move over, zombies. Try something meatier. The Frazier History Museum is celebrating Founder’s Day by trying to break the Guinness World Record for the largest gathering of pirates (the current record is 2,646, and is held by the Northern California Pirate Festival). Scurvy dogs of all ages are invited. The day will feature a street carnival, the Leopard Percussionists, free admission to the museum for the “Pirates: Treasure & Treachery” exhibit and more. Pirates need to be there by 11:30 a.m. The museum promises to have you out before the UK/U of L kickoff. Costumes should include a hat or bandana; an eye patch; a sword, hook, skull and crossbones and/or parrot. —Sara Havens

Rich bloodlines inform every rhythmic and tonal facet of Southern Grass. In 1960, the late Bob Paisley joined Ted Lundy as frontman for the Southern Mountain Boys. Meanwhile, their sons, Danny and T.J., both accomplished players, formed Bluegrass Buddies; those parallel careers meshed 15 years later, with Danny and T.J. joining their fathers onstage. In 1979, Bob and Ted created Southern Grass, with Danny sharing the spotlight as lead vocalist. In keeping with the family affair, Don Eldreth Jr., son of a renowned mandolin player, came onboard. Watch juniors carry on elders’ traditions during Saturday’s installment of the annual Kentucky Bluegrass Festival at the Water Tower. —Mat Herron

Cross-cultural fireworks ensued for Xavier Rudd’s sixth studio album, Koonyum Sun. Rudd’s singer teamed with Johannesburg bassist Tio Moloantoa and percussionist Andile Nqubezelo, the rhythm section of the late Lucky Philip Dube, whose 22 albums helped make him South Africa’s best-selling reggae artist before he was murdered in October 2007. Rudd hit it off with the musicians at a festival in Austria, and the three began rehearsing in earnest at an old pottery factory on Australia’s south coast. “We really had an innate connection,” Rudd says. “We’ve been playing together ever since, but it still feels new.” The newness is less apparent on romancer “Love Comes & Goes” than it is on joyous “Time to Smile,” where the two augment Rudd’s Paul Simon-like croon. Another record is likely, the bandleader says, “But I never plan too far ahead.” —Mat Herron

You don’t usually find the words “naked” and “glass” in the same sentence, but that’s the idea behind Flame Run Glass Studio and Gallery’s latest exhibition. The idea is to show works that are made from unadorned, clear glass. “This is a chance to explore glass in its purest form,” says Flame Run owner Brook White. “To create glass without the wonderful distraction of color.”

Abstraction in art is an acquired taste. But once you get there, it can open up a world of possibilities that formerly only resided in the imagination. T.L. Macon’s new paintings take us on that journey. “By allowing my thoughts and emotions to reflect on so many of the events over the course of the year,” Macon says, “I wanted to translate the experiences and knowledge of this time in texture and color.”

As a result, his paintings, composed of visible brush strokes, shapes and floating color, have a lot to say. —Jo Anne Triplett