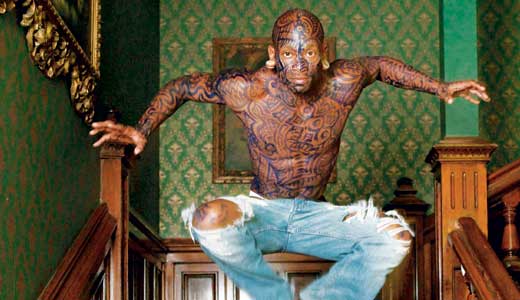 Bats in the Playoffs

This is it, baseball fans — summer is winding down, the International League regular season schedule has been played out, and now it all boils down to the playoffs. The good news is that the Louisville Bats are in. The bad news is you may have only a couple more chances to enjoy a ballpark fried bologna sandwich. And tell us this: Where are you going to get a Slugger Dog come October? Or hear your favorite orange-vested vendor shout, “Ice cold canned beer!”? Nowhere, that’s where. So get yourself to Slugger Field tonight and tomorrow evening as the Bats host the first two games of the opening-round playoff series. Fans can enjoy $1 hot dogs and Pepsis for this evening’s game, and $1 Budweiser happy hour on Thursday. If they win the series, they’ll be back next week — so take us out to the freaking ballgame so we can root, root, root for the home team. —Kevin Gibson

Last year, it was the gravelly drone of cement mixers and reaching for revolvers, Bostonian style. While attendance was slim, the programming knew few peers, with Faust being one of many highlights, a graying but gratifying Mission of Burma being another. Now in its second year, Boomslang, a not-too-distant cousin of Big Ears Festival in Knoxville, Tenn., throws down with Rhys Chatham of “100 Guitars” fame, Sonic Boom (ex-Spacemen 3), Christian Fennesz Trio at Singletary Center for the Arts and, coup of coups, Death. Last year, Drag City brought Detroit proto-punk outfit’s 1974 master work, … For The Whole World To See, long overdue representation. It’s hard to figure what appearance is special because all of them are, so plan ahead, wear comfortable shoes and don’t drink too much — you might miss history. —Mat Herron

Five of Asia’s best films will debut throughout the month at Village 8 Theatres for the Crane House’s 11th annual Asian Film Series. In fact, this will be the first time “Last Train Home,” the first in the series, is screened at a theater in the United States. The documentary follows a family’s journey in China as they join in the country’s mass migration tradition. Each year, more than 200 million factory workers from China’s rapidly developing coasts travel inland to visit relatives during the New Year’s celebration. Also screening are “Tehran Without Permission,” “No One Knows About Persian Cats,” “About Elly” and “The Sun Behind the Clouds: Tibet’s Struggle for Freedom.” For showtimes and synopses, go to village8.com/asianff.htm. —Sara Havens

It’s no secret that Louisville is a city of neighborhoods. While pride in one’s nabe can often result in a bout of inter-district tribalism, the Center for Neighborhood’s Grassroots Gala shows what our respective love of place can look like when we come together over food, drink and a speech by Louisville Metro Council’s very own Yoda, Tom Owen. Sponsored in part by 89.3 WFPL, this year’s gala will feature performances by John Gage and the Twisted Sister Family Band; a “Keep Louisville Weird” $5 raffle; a BBC Community Beer Garden; and numerous neighborhood booths highlighting the various jewels and people that make the River City a nexus of niches. Social and civic empowerment aside, the real star is the “Taste of Neighborhoods” booths, featuring free delicious food from many of Louisville’s independent restaurants. —Jonathan Meador

Got 12 hours to spare for art? Dan Dutton is telling his family’s story with performance art, fashioned out of dance, music and storytelling. It runs from noon to midnight, but there’s a Cliffs Notes version from 7:30-9 p.m. “‘You’ll Always Come Back’ began as an investigation into my father’s family history,” Dutton says, “specifically stories passed on to him by Pete Dutton, whose tombstone reads ‘Born in Slavery — Died Free.’ We’re not treating this material so much as history, more as the germination points to look at how the body, identity and image are shaped by fantasies of history, ghosts and ancestors.”

The Kentucky School of Art at Spalding University is sponsoring Dutton. They’re having an opening party from 5:30-7:30 p.m. in conjunction with the performance. —Jo Anne Triplett

Trying to describe the Heartworks event in 150 words could be tough, so I’ll let organizer Rachel French take a stab at it: “Basically, what I’m doing is pulling together as many of the people who have touched me during my short-but-awesome career in this city and cramming them into one big, awesome show — ‘What makes your heart work?’ — that’s the idea,” she says. Heartworks will include a fashion show featuring French’s designs (Venomiss Designs), local artists Justin Kamerer, aka Angryblue, Scott Slusher, Lisa Frye and Tarik Dozier to name a few, and music by Bu Hao Ting, Blue Moon Circus and The Revenants. —Sara Havens

Anacortes, Wash., the Northwestern hamlet immortalized in “Snow Falling on Cedars,” also is home to an artist collective where Madeline Adams’ EP took shape. While on tour with the group Your Heartbreaks, she and Karl Blau — in part responsible for the lo-fi K Records’ sound that took shape in the late ’80s and early 1990s with bands like Beat Happening — combined their talents, and out came Adams’ sweet but not saccharine melodies. Adams, an Athens gal, arrives by her musicality the old fashioned way: genetics. Great Aunt was an opera singer, Grandma was a concert pianist, Mom was obsessed with Joni Mitchell. Adams’ flavor is worlds apart from the laptop music coursing through Athens nowadays, she says, but the name of the game there is community. “I think we’re existing in pretty much all genres.” —Mat Herron

I bet you thought activism was all about protests, petitions and civil disobedience. Turns out there’s another way to support civil liberties, and it just so happens to involve libations and live rock ‘n’ roll. The Monkey Wrench is hosting Fleur de Liberties, a benefit for the American Civil Liberties Union of Kentucky. The ACLU plans to use this as an opportunity to mobilize Louisvillians on issues like gay rights, immigration, abolishing the death penalty and reproductive freedom. But the evening won’t be all business: There will be live music provided by Rest Assured, The Commonwealth, Nerves Junior, The Instruction and DJ Sam Sneed, as well as a raffle including tickets to Actors Theatre, a box at Churchill Downs and gift cards to local businesses. And if the event inspires you to display some civil disobedience, you can always protest last call by handcuffing yourself to the bar. —Sarah Kelley

It might still be hot outside, but it’s September, the traditional start of the fair and festival season. The Mellwood Arts & Entertainment Center kicks it off with its second annual September Art Fair. The juried fair consists of 180 booths, featuring artists who work in Mellwood as well as other locals, the Ursuline Sisters and six artists from the Pendleton Art Center.

The Pendleton Art Center is to Cincinnati what Mellwood is to Louisville. Both were founded in century-old industrial buildings and house art studios and exhibitions. “I believe our involvement with Pendleton Art Center is a really great example of Louisville’s interest in working with neighboring cities, and Mellwood’s ability to assemble these large-scale art and cultural gatherings,” says manager Jane Ferebee Smith. —Jo Anne Triplett

‘Anarchism and Its Aspirations’

Sick of the political party that’s in power? You can vote ’em out in November, but is that really going to bring enough change? There are alternatives — and I’m not just talking about the Tea Party. The Women in Transition Space is hosting Cindy Milstein, board member with the Institute of Anarchist Studies and author of “Anarchism and Its Aspirations.” Today’s anti-authoritarian community is probably the political movement that’s most honest about making their impact work at a grassroots level and listening to each individual — those are core beliefs for these folks. Milstein will discuss her book and related local efforts such as the new No Borders Radical Lending Library, which will visit neighborhoods bringing free literature on the radical perspective. Wednesday’s get-together is free, but potluck dishes and small donations are appreciated, along with an RSVP to [email protected]. —T.E. Lyons

“3 Married Guys” is a show that was produced by MidwestCleanComedy.com, combining the talents of three of its featured comics and hometown boys Tim McClendon, Chris Crowder and Echo. They’re garnering a lot of local and national buzz, as it promises to be a clean show, where the guys will spend the evening celebrating the women they love through the experience of shared laughter. “We truly believe that if couples can laugh together,” Echo explains, “they are more inclined to stay together.” Tim, Chris and Echo met performing on the Louisville scene and soon found they had one thing in common — they were all not only married but happily married. “This is a show that celebrates love and laughter within a marriage,” Echo says. “It’s a response to all the negative portrayals of marriage in comedy today.” —Brent Owen

For the last three years, 930 Gallery director Michael Winters has been showing other artists’ work, but now he and his wife, Mickie, will share their own exhibit — a collection of photographs they’ve entitled “Jacob’s Ladder,” from the biblical tale where a desert traveler dreams of a ladder “resting on the earth, with its top reaching heaven, and the angels of God were ascending and descending on it.” “We like this story because it runs parallel to the experience of our art making,” Michael says. “Like receiving a good dream, we sometimes are gifted with the ability to see the world around us become unusually radiant.”

The opening reception Friday will include an artists’ talk at 7:15 p.m., and music from Brooks Ritter and Mike Mangione. —Jane Mattingly