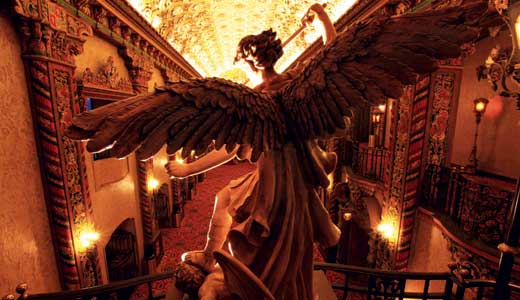 Thomas Wincek likes to stretch. That’s probably why the songwriter from Madison, Wis., let time be damned on the 17-minute piano epic “Segni,” the opener on the debut EP from his current project All Tiny Creatures. A past collaborator in Collections of Colonies of Bees and Volcano Choir, the latter with Justin Vernon of Bon Iver, Wincek has a smart and supple sense of composition; his songs are streamed consciousness, mentally adrift rather than buried in snowdrifts of folk. The group debuted at last year’s South By Southwest, and their full-length, Harbors, is due early next year. Tonight’s show features an all-too-infrequent appearance by Interstates, whose wordless propulsion arrives courtesy of Alex O’Nan and Kyle Noltemeyer. —Mat Herron

Fall approaches. Want to drink a pumpkin? If so, get ready for the Fifth Annual Feast of Fall Beers at the Keg Liquors in Clarksville, where craft beer distributors will offer tastings of more than 20 different pumpkin, Oktoberfest and other fall-themed brews. Beers from international brewers such as Spaten and Paulaner will rub bubbles with Flying Dog Dogtoberfest, Schlafly Pumpkin Ale, Bell’s Octoberfest, Breckenridge Autumn Ale, Dogfish Head Punkin Ale and many more. The crazy part? It’s absolutely free and open to the public, so long as you’re 21 (bring ID). Now isn’t this a better use of a pumpkin than making pie? —Kevin Gibson

The Louisville Graphic Design Association is bringing Scott Thomas of SimpleScott to town for a lecture and book signing. Scott Thomas is a designer “constantly seeking the simplest answer to complex problems,” hence his company’s name. His claim to fame is his work on the Obama presidential campaign.

Thomas joined the Media Team at Obama for America in 2007, where he became design director. His book, “Designing Obama,” focuses on how Obama centered on art and design to get his message across to his grassroots supporters and the public at large, a first in American politics. Reservations are required. —Jo Anne Triplett

Greg Hahn is one of the most popular touring comics today and has appeared all over network and cable TV, including Comedy Central, MTV and NBC’s much-missed “Late Night with Conan O’Brien.” Hahn is most noted, though, for his regular appearances on the wildly popular “Bob & Tom Radio Show” — which is what brings him to the Louisville Improv on Friday, with one-night-only performances as part of “The Bob & Tom Comedy All-Stars.” The show also will feature Chick McGee, Bob Zany, Greg Warren and Donnie Baker & The Pork Pistols. The two shows are guaranteed to sell out, so get your tickets early. —Brent Owen

There’s no mystery to you, vintage-blues purist. You’re sitting at home, comfy, listening to Sonny Boy Williamson and Blind Lemon Jefferson and, man, that’s all aces, but there are a few truths your dome must absorb. One: Genres don’t come in time capsules. Two: Someone under age 30 and caucasian can channel the spirit of the blues masters respectfully — provided you stop gritting your teeth long enough to hear it.

Hambone isn’t selling “Snake Oil” on his newest CD, Conflagrations, which he unveils this coming Friday at an old Germantown haunt. Sure, he might be an audacious cuss (his website boasts the phrase “I Melt Skulls”). He layers his blues and rock influences methodically. It ain’t braggin’ if you can do it. —Mat Herron

We all have at least one person in our lives who has the ability to drive us absolutely batty. This person can say nothing, and we feel berated. Or he can compliment us, and we feel spat upon. Ironically, this is the same person we would give life and limb for on any given day. Hence, the basis for Paul Osborn’s “Morning’s at Seven,” continuing this weekend at The Little Colonel Players. Set in a small Midwestern town in 1938, the play revolves around four aging sisters, three married and one a spinster. They know everything about one another, having lived next door to each other most of their lives — which is why their easy, routine lives get turned upside down when two of them decide to make some life changes before it’s too late. —Laura Morton

Love conquers all, especially on record. For Many Colored Kite, Jayhawks co-leader Mark Olson turned to girlfriend Ingunn Ringvold, who co-wrote two songs and joins him onstage for this upcoming U.S. tour. In recent months, his role has mutated into a kind of elder statesman, whatever that means. Next year he’ll speak in Memphis at the International Folk Alliance, a role shared by Byrds’ founder Roger McGuinn and Buffy Sainte-Marie. We’re still a few months away from January’s Jayhawks reissues, but Olson’s folk-pop is a better-than-average hors d’oeuvres: elegant, unassuming, with a voice showing the exuberance of songwriters half his age. And speaking of that: Much of this tour finds Olson choosing a younger generation to kick off the shows (Cory Chisel, Breathe Owl Breathe, etc). Vandaveer is the pick for Saturday. —Mat Herron

Art in the Highlands

With St. James right around the corner, it’s time to start training for proper fine-art shopping and browsing. The Louisville Collegiate School is hosting its second annual Art in the Highlands, a juried show featuring more than 60 artists. Everything from watercolor, oil painting, photography and jewelry to sculpture and pottery will be on display, and there’ll be live music by John Gage, Joel Timothy, Will Cary, Augmented Five and more. Java Brewing and Homemade Pie Kitchen will be among the food vendors, and there’s plenty of activities for kids, including pottery painting and weaving lessons. Best of all, it’ll give you a chance to get out and enjoy the first taste of fall. —Sara Havens

If you like cute, cartoony, screen-printy things and would love to adorn your humble abode with some affordable, ready-to-hang handmade masterpieces, then dance on down to Hey Tiger sometime in the near future — perhaps on Saturday, between 6 and 9, for the opening reception of Kin Ship Press’ art show, featuring a new collection of canvas prints by Dan Davis and Hillary Harrison. You may recognize this artsy duo and their creations from the Why Louisville store, Dot Fox or the late Snack Institute apartment/gallery, but now they’ve got their own thing goin’, working out of Germantown. Harrison also founded Bejeezus magazine, and Davis (aka Skeleton Royal) plays in the band Gangly Youth and likes to drink beer in the shower. —Jane Mattingly

For three decades, Whole Foods Market has attempted to bridge the gap between organic farm-fresh goodness and the convenience of the American big-box retail experience. On Saturday, you can honor the Austin-based chain by showing up to their 30th birthday (just don’t mention their opposition to health care reform, and bring $5). If that’s not green enough for you, all of the event’s proceeds will contribute to micro-lending programs designed to help the indigenous entrepreneurs of countries whose names you cannot pronounce. Expect delicious grilled food and musical performances by Divided We Fall, J. Glenn, Night Torn Mad, Pilots and Thee Flying Carpets. —Jonathan Meador

Help connect Louisville’s young people to healthy, sustainable food as you enjoy a delicious seasonal meal prepared by some of the city’s top chefs at the Field-to-Fork Fundraiser for the Food Literacy Project. The six-course dinner pairs some of Louisville’s top culinary talent paired with local farmers and features the bounty of the local harvest season. Participating chefs include Dave Nelson, Jay Denham, Mark Williams, Dallas McGarity, Nancy Russman, Marsha Lynch, Jim Quinter and more. Dishes will range from Kentucky Bison Co. “Sliders” to Harned Ranch Boeuf Bourgignon. Proceeds from the event will help develop an outdoor kitchen on Oxmoor Farm, where Food Literacy Project participants can develop recipes with farm-fresh vegetables. Reservations must be made by Sept. 19. —Robin Garr

Say the word “landscape” and most of us envision the great outdoors. But there is an interior conceptual component as well, and that’s the area Tiffany Carbonneau has explored. “By stripping structures and systems that convey information within our cultural landscape of their intended purpose,” she explains, “(my) work presents a renegotiation of the way we ingest information that influences our thoughts and actions. (My art) exposes the means and processes through which systems of mass media and public architecture convey information, urging the viewer to address previous assumptions about the nature of, and our relationship to, mass media, delineated space and the digital image.”