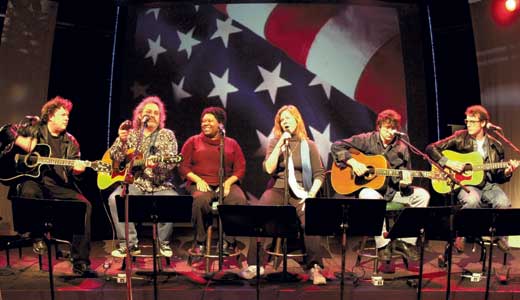 New trend: Bring your parents on tour — that’s what Laura Veirs did. At least there’s a (slight) chance they’ll pick up a bar tab. For the Colorado Springs, Colo., native’s new album, July Flame, Veirs’ self-described “crappy nylon string guitar” serves her well. Her alt-folk leanings are adorned with tasteful string arrangements and durable, life-spun incantations. Joining the bill are The Watson Twins; the duo of Leigh and Chandra are increasingly forging stronger connections with their hometown via a semi-annual pilgrimage. Opener Led to Sea is the skewed folk project of L. Alex Guy, a narrative specialist from Seattle who moonlights in Veirs’ band, Mirah, and in the Jason Webley Trio. —Mat Herron

Kentucky’s horse fever is higher than usual due to the 2010 Alltech FEI World Equestrian Games that will be in Lexington Sept. 25-Oct. 10. The Kentucky Museum of Art and Craft is no exception, presenting its exhibition “Equine Divine” (through Oct. 16) and upcoming gallery talk by Lisa Borel, wife of Derby-winning jockey Calvin Borel. Taking questions from the audience, Lisa will discuss her background in the equestrian industry as well as her life with Calvin, one of the most beloved jockeys in recent history. As an added bonus, Calvin will do a “meet and greet” after her talk. My Racing Heart, a support group for equine rescue organizations, is sponsoring the event, which includes hors d’oeuvres and a cash bar. —Jo Anne Triplett

It’s a double-doozy — Walden doing Williams. The sensational students of Walden Theatre are kicking off their season with this rarely produced 1953 Tennessee Williams piece, in which a man named Kilroy, low on cash and full of self-doubt, finds himself in a bleak desert town, a sort of limbo for once-notorious individuals whose glory days are behind them. With his boxing career in decline, he fades into the lonely, surreal dream world of an ambiguous town somewhere in the Spanish-speaking world, where famous literary figures like Don Quixote, Esméralda, Casanova and Lord Byron also appear. The play consists of dream-like scenes as it merges history and literature to examine human experience. — Jane Mattingly

As part of the first-ever Louisville Craft Beer Week (Sept. 24-Oct. 2), BBC is hosting a Cask Festival featuring beers from more than 30 breweries, both near (Browning’s, NABC, Cumberland) and far (Rogue, Bells, Flying Dog, Stone). So what makes cask beer so special? It’s unfiltered, of course, and is served directly from the cask without the help of nitrogen or carbon dioxide. Basically, it’s how they drank beer back in the day, without the fancy draft machines. The $30 ticket will get you samples, live music from Stonewheel, and food from BBC, Molly Malone’s and Brendan’s. For more events during Craft Beer Week, check out louisvillecraftbeerweek.blogspot.com. —Sara Havens

If you remember listening to the radio in the weeks following the terrorist attacks of Sept. 11, you might recall that Clear Channel Communications banned 166 songs from airplay, including awesome ones like Van Halen’s “Jump,” The Chi-Lites’ “Have You Seen Her” and pretty much every radio-friendly Metallica single from their pre-suck era. So, in the spirit of honoring America’s long-standing tradition of being afraid of things it doesn’t understand and censoring the hell out of stuff in the process, the First Amendment Center would like to invite you to a free concert featuring controversial songs that have made the moral “majority” cringe with fear. “Freedom Sings” features a rotating line-up of musicians performing these songs, as well as multimedia displays to help you better understand why the lyrics of “Louie, Louie” were (and are) so dangerous to our moral character. —Jonathan Meador

Stacked with intelligent folk-pop songcraft à la Yo La Tengo and New Pornographers, Lohio’s methods shift from delicate lullabies to grand pop marches. It was evident in the tones of “Grandfather’s Chaise” on their self-titled EP. Now the Pittsburgh ensemble, featuring homegirl and former Commonwealth member Elizabeth Adams, is exploring the branches on their new EP, Family Tree. The tribal undulations of the title track sit comfortably alongside patient groove and distortion combos (“Wind and Leaves”). The double dose begins Friday at WFPK’s “Live Lunch,” with a throwdown later at Zanzabar. For a taste, stream the EP at lohiomusic.bandcamp.com. —Mat Herron

We’ve just passed the halfway mark to St. Patrick’s Day, so it’s time to kick up our knickers, grab a pint of Guinness and celebrate the spirit of the Emerald Isle. The annual Louisville Irish Fest is Sunday on the Bellarmine campus, and it promises hearty food, flowing drinks and lots of music and dancing. Performers include Needfire, Chattering Magpies, Guilderoy Byrne, Cloigheann and Keltricity. The Mulligan Stew Players are debuting their new play, the romantic comedy “The Faery’s Kiss,” and there’s a new “Irish gaming area” for the kids, as well as Gaelic language lessons. Check out the website for details. —Sara Havens

Doula (noun; rhymes with “hula”): a trained professional who offers emotional and physical support to a mother during and after labor. Doulapalooza (noun; rhymes with … nothing, really): a family-friendly picnic with entertainment, activities and information about childbirth, breastfeeding and, of course, doulas.

Birth Care Network is hosting the sixth annual Doulapalooza at Willow Park, where guests are invited to bring a picnic and enjoy live music provided by Steel Leopards, The Sirens, Troubadours of Divine Bliss, Marion Dries, and TKO with Leigh Ann Yost, just to name a few. There also will be snacks, including a guitar-shaped cake and fresh local milk, face and body painting, and raffle prizes. The event is free, but a $5 donation is suggested to benefit Birth Care Network, a nonprofit dedicated to helping women experience a healthy and informed childbirth experience. —Sarah Kelley

There are giant renaissance men whose biographies span the 20th century and cross the continents. In Louisville, such a man is pan-African scholar Jan Carew, who is turning 90 years old this month and is being honored as part of the Muhammad Ali Center’s new author series. In academic circles, the Guyanese author, educator and philosopher is best known for his first novel, “Black Midas,” and his memoir, “Ghosts in Our Blood: With Malcolm X in Africa, England and the Caribbean.” While living in England, Carew lectured on race relations at London University and was briefly a broadcaster with the BBC. His journey then took him to the halls of Princeton and to Kwame Nkrumah’s Ghana, all the while facing down the forces of segregation and colonialism. Carew has spent the past decade as a visiting professor in the Department of Pan-African Studies at the University of Louisville, which honors his almost century-long story. —Phillip M. Bailey

The name of this festival is deceptive. Billed as a survey of the New York film scene, the event is a lot more international. From late September through early October, the fest’s 10 finalists will screen in more than 200 cities, where audiences from around the globe will vote on a winner. The featured shorts were produced in countries across Europe, as well as Mexico, Canada and Australia. Your chance to be one of the expected 100,000 judges for this competition arrives Tuesday at the Kentucky Center. The festival is presented by the Louisville Film Society and Hart-Lunsford Pictures, the local production company that brought us “Me and Orson Welles,” with Zac Efron, and the soon-to-be released “Dirty Girl,” featuring Juno Temple and William H. Macy. —J. Christian Walsh

This exhibition is a family affair. Jim and Kay Grubola are artists who just happen to be married to each other. What makes “Geometria/Uranometria” even more special is that it’s the first time in 25 years they have shown together. Their work is different, with organization and order their common ground. Kay’s creative starting point is geometria, or the geometry of place. She focuses on the minute, creating objects based on familiar shapes that may not be what they appear to be. Displaying the objects on a grid, as a collector would, lets the viewer easily examine the details.

Jim’s work is cosmic in its focus. Literally, he took to the stars. Uranometria means “measuring the sky” in Greek, while geometry translates to “measuring the earth.” —Jo Anne Triplett

Well, it’s that time of year again — crisp nights, colorful leaves, cozy sweaters and stories of witches and villains, ghosts and goblins. Every fall, when the night air grows cold and a haunting feeling lurks around every corner, Actors Theatre thrills us with their production of Bram Stoker’s “Dracula.” It’s the story of the infamous count from Transylvania who appears unexpectedly and leaves behind a body count—you know, that crazy, old-school idea that vampires are actually something to fear and don’t make dreamy boyfriends. It’s a delicious story that’s been told and retold many times, but every time it’s enchanting and terrifying. Make sure you include “Dracula” in your autumnal tradition — for a night of thrills where the victims make you weep, the villain makes you gasp and the pyrotechnics make you jump. —Laura Morton