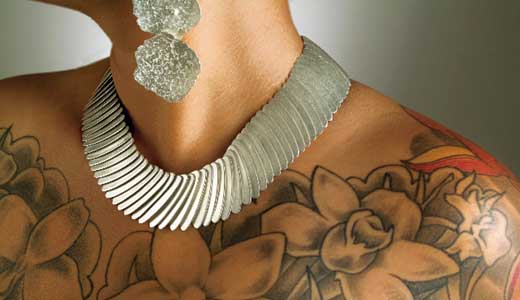 When was the last you heard a diva describe her album as “an epic James Bond film in outer space”? I thought so. This tornado of electro-soul inhabits different genres, positioning herself as a crossover threat by enlisting smart producers (Big Boi, Nate Wonder) and guest stars (Saul Williams, Of Montreal) for her breakthrough, The ArchAndroid: Suites II and III. It follows the story of Cindy Mayweather, a character Monáe introduced on her previous outing, Metropolis. Orchestral overtures, neo-soul tangents and the “Crimson and Clover”-on-LSD sway of “Mushrooms & Roses” reveal a mad genius at work. As the crowned city she wears on the album cover makes clear, Monáe thrives on imagination, making her a perfect fit for the IdeaFestival, which celebrates the mind’s limitless potential. (For more on the IdeaFestival, turn to page 30.) —Mat Herron

A Place to Bury Strangers

“I’ve always tried to work with other people, and it never works out exactly the way you want it,” says Oliver Ackermann, producer, singer and guitarist of A Place to Bury Strangers. “You realize you’ll have to be in control over what you want to do.” Their newest, Exploding Head, is a racehorse built on noise pop themes that recall Jesus and Mary Chain or My Bloody Valentine. Ackermann made the recording experience less boring by layering an obscene amount of guitars, attaching microphones to magnets and swinging them around in the air while drummer Jay Space and recently departed bassist Jono Mofo laid it down. By all accounts, new guy Dion Lunadon appears to be fitting in, though: During his second show with the band in San Francisco, Lunadon sliced his face open. “He was all right,” Ackermann says. —Mat Herron

U of L Department of Theatre Arts

According to director Dr. Lundeana Thomas, “sometimes we can accomplish more by sharing a laugh than just arguing.” Written by Broadway producer, director and writer George C. Wolfe, a native of Frankfort, Ky., “The Colored Museum” uses satire to explore the American black experience of the 1980s. The show, winner of the Dramatists’ Guild Elizabeth Hull-Kate Warriner Award when it premiered in 1986, tackles racism, stereotypes and other touchy subjects with blunt humor and parodies of both blacks and whites. But as Thomas points out, the experience is fun and enlightening. “The play has all the entertainment value of a comedy and musical but with a message, too," she says. —Jane Mattingly

‘How Improv Got its Groove Back’

Damaged Goods and their clever show titles are back, and they never lost their groove. Unlike Stella (you know, from the movie), they’re not going to Jamaica — just Butchertown, and Whoopi Goldberg probably won’t be there, though I don’t want to jump to conclusions. Stella, however, will make an appearance in an original skit, "Improv and The Never Ending Quest for Groove,” written by Damaged Goods head sketch writer April Singer. Aside from that, I can’t tell ya much more, because it’s all going to be totally improvised. They’ll be playing some of their usual fan favorite games, and pulling a few more brand new (undamaged) goods from their bag of tricks. They’re also running a two-for-one special on tickets, so bring a friend! —Jane Mattingly

“The day is ending. It’s time for something that was beautiful to transform into something else that is beautiful.” That is how Julia Comer let her customers know that as of Thursday, she will close her contemporary art jewelry store on Bardstown Road, Objects of Desire Gallery, after 20 years in business. She plans to open FLOW, a gallery/studio that will feature jewelry she has created, during the First Friday Trolley Hop.

FLOW will continue carrying art jewelry, textiles and other pieces of wearable art that Objects of Desire customers have always loved. Comer plans to show her work alongside some of the artists she has dealt with over the years. Her new website will launch at the end of October. —Jo Anne Triplett

Even after 50 years, the well is by no means dry for this Blues Hall of Fame inductee and seven-time Grammy nominee. Born at the end of World War II in Kosciusko, Miss., Charlie Musselwhite began his blues education in Memphis (where else?), looking up to and studying the moves of Furry Lewis, Will Shade and Gus Cannon. Chicago beckoned, and Musselwhite found himself among the grit of the fledgling electric blues scene fostered by the likes of Muddy Waters, Little Walter and Howlin’ Wolf. The truth about Charlie: Although his catalog is 30 records deep, it took a half-century to put together an album of songs he composed entirely on his own. Guess that’s the price of majoring in blues. “I didn’t know I was going to have a career in music,” the modest student explains. “I’m still learning.” Bluestown opens. —Mat Herron

Widely acclaimed modern dance ensemble Diavolo will perform at the Kentucky Center on Friday. If the press clippings bear out, it will be a performance to remember. Diavolo was founded in 1992 by choreographer Jacques Heim, who had the vision of creating large-scale interdisciplinary performances that examined — with humor and emotion — the ways humans interact with their environment. The company is now a collection of dancers, gymnasts and actors who utilize elaborate, surrealistic sets to tell stories with motion and interaction. Everyday items like chairs and stairways are catalysts for dramatic leaping, flying and twirling that become metaphors for the absurdities of life and the struggle to maintain our humanity in a modern world based on technology. (Diavolo’s performance is part of the IdeaFestival. Check out page 30 for more.) —Kevin Gibson

The UnFair is on this year, without an ounce of red tape anywhere to be found. A few weeks ago, Metro Council amended the controversial bill that prohibited local artists to showcase their work at the Mag Bar and surrounding area during the St. James Court Art Show. More than 20 artists will have their work on display this weekend at the UnFair, including Judson Baker, Nikki Moore, Paul Harshaw and Greg Edwards. So as you’re carving through the hurried crowd of St. Jamesers, remember to duck into the Mag Bar for a reprieve and a glimpse of some of this city’s best artists. —Sara Havens

Just like clockwork, autumn temperatures have finally arrived now that the festival season is here. The second annual street fair that is the NuLu Festival will go on. The East Market arts district, known as NuLu, will “keep Louisville weird” with plenty of food, drink and music. The Proof Gelato Cart will be there alongside goodies from The Bodega at Felice and Cake Flour. Two places foodies love, Toast on Market and 732 Social, are offering special events. The Louisville Beer Store will be getting its “oom-pah” on with Oktoberfest. Local bands playing include Love Jones, Lucky Pineapple and The Fervor.

Don’t forget to bring your offspring. There will be a free Kids Corner featuring The Bubble Truck, face painting and water activities. —Jo Anne Triplett

At last check, there were 136 people who marked “attending” on this event’s Facebook page, a testament to the somewhat underground scene in and around gay bars in Louisville in the ’70s and ’80s. Tony Allison planned this reunion to reconnect with his friends and acquaintances from back in the day. He says people are coming from nine states so far, and that the owner of Badlands & Discovery (the premier gay bar at the time), Morris McCrocklin, will be in attendance, as will the doorman from the Mint Julep and several performers from the Old Downtowner, all now-defunct bars. There will be a Tea Dance at 4 o’clock, followed by The Legend’s Review featuring top drag performers from the past. “I am most looking forward to seeing friends of mine I had lost contact with and haven’t seen in over 25-30 years,” Allison says. “Some of them I thought were among the casualties of the AIDS epidemic that devastated our community in the ’80s.” —Sara Havens

I get a lot of e-mails announcing many shows throughout Louisville on a daily basis. I do my best to bring attention to as many of them as we have room for. So when the press release came across my desk announcing the Photography Show at Liberty Tattoo, I filed it away as a “maybe.” And then I took a closer look at the photo attachments — Mitch Lin’s “No Way Out” featuring a sinister clown with a gun to his head (which is now my desktop image) and Scott Shuffit’s “Quinn’s Truck.” The artwork captured my attention as I examined the brilliant attention to detail in each photo. This show is not one to be missed. It features work by eight local artists, including the aforementioned two as well as C.J. Pressma, Paige Nessel and Yair Riback. —Sara Havens