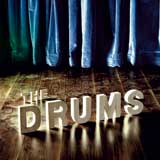 Brooklyn meets Manchester on this self-titled offering. By their own admission, the band wanted to sound like The Wake, one of the groups signed by ’80s Factory Records, the label responsible for creating the “Manchester Sound.” Throughout the album, all tell-tale signs appear: dual guitars, go-go drums and quasi-British vox over pointed synth parts. Close your eyes, and picture blissed-out, acid grandeur of a dancing throng in “24-Hour Party People.” By and large lyrically shallow, The Drums make a late-sequence turn toward youthful romanticism on “I’ll Never Drop My Sword.” But by then, it’s much too late. They’ve dropped the ball when it comes to infusing their sound with their own sense of individuality. Talk about a joy division.