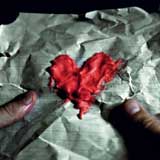 Sara Beck is back, once again recording and performing under the name given by her brother and producer, rapper Black Nasty. The first half of the new disc is dominated by quick songs that ricochet around on two or three smartly chosen alt-rock riffs. The variety of songwriting within that limited model is winning enough, but the production and mixing unfortunately overwhelm the singing with guitars and drums. That’s a shame, which becomes particularly evident when “Nag Nag Nag” comes along and shakes up everything that came before. Suddenly Ms. Beck is showing her Chrissie Hynde roots, with welcome touches of folk-rockabilly brightened by surprising production quirks. The rest of the set is more balanced, leading up to the memorably bittersweet barrage “Sex Kinda Smells.” Overall there’s a lot of worthwhile music here, though none of these 11 songs matches her duet with Will Oldham on 2006’s Mold the Gold.