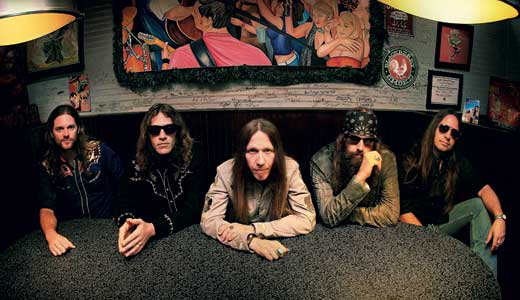 Bikers, country music fans and Southern-rock disciples will find much in common with the leanings of Atlanta’s Blackberry Smoke (pictured). Having reached No. 1 on the country charts, Smoke’s sophomore album, Little Piece of Dixie, is ballsy, bluesy Southern rock in the tradition of Lynyrd Skynrd and The Allman Brothers Band. They headline at the Vernon (1575 Story Ave., 584-8460) Friday en route to opening dates with Travis Tritt and Kid Rock. We’ll forgive them. A little. Friday’s show doubles as the release party for Great Commotion, the newest from Mic Harrison and the High Score. Drummer Brad Henderson started a blog at the group’s website, www.micharrison.com, detailing all the mania and monotony that comes with touring. Tickets to the 18-and-over show are $15 in advance from www.ticketweb.com, $17 at the door. Doors open at 8 p.m.

Un-Holy
Toronto digitizers Holy Fuck return to North America from their appearances at the Reading and Leeds festivals, touring on the strength of their latest album, Latin. Their style is digital in an unconventional sense, as the group uses a toy phaser gun, 35mm film synchronizer and toy keyboards, among other devices, to create their synthetic sonics. No laptops. No backing tracks. Their U.S. tour sees a continuation of the group’s stable touring lineup; the shows kicks off tonight at newly renovated Zanzabar (2100 S. Preston St., 635-ZBAR). The gig will serve as the world premiere of the band’s new Cowboy Cat shirt. Probably a collector’s item in about 12 years. Show starts at 9 p.m. Sample jams at www.holyfuckmusic.com.