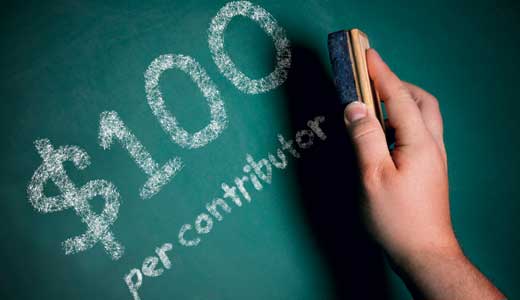 When University of Louisville professor Ben Foster campaigned for a seat on the Jefferson County Board of Education two years ago, he felt hampered by the contribution limit put on school board candidates.

The first-time candidate raised more than twice the amount of his opponent, but still found it difficult to compete because the Jefferson County Teachers Association spent more than $160,000 promoting its selection: longtime board member Larry Hujo.

“I didn’t realize how low the limit was until after I filed and began looking at the state’s campaign finance laws,” Foster says. “When I realized that, I knew I had very little chance of unseating someone who was supported by the teachers union, and it was very disheartening.”

After his unsuccessful bid, Foster petitioned the ACLU of Kentucky to challenge the law, and eventually it filed a federal lawsuit against the Kentucky Registry of Election Finance in U.S. District Court, arguing that state law undermines the democratic process, stifles political dialogue and violates donors’ First Amendment rights.

Earlier this month, a federal judge ruled in the civil rights organization’s favor and suspended the state law that limits campaign contributions in school board races to $100 — making candidates in those races eligible to take $1,000 donations from individual contributors.

Now that the cap has been lifted, school board candidates across the state are set to fundraise on an even playing field. Before stuffing their coffers with cash, however, challengers and incumbents have been given mixed messages over the past few weeks about the ability to raise money in the ruling’s immediate aftermath, creating a potentially uneven donation practice in this year’s election cycle.

In a 16-page decision, U.S. District Judge Danny C. Reeves ruled that Kentucky’s law limiting campaign contributions in school board races is unconstitutional, because it restricts a candidate’s right to free association.

Among other things, Reeves noted that outside groups, including the teachers union, raised and spent more than $100,000 in support of individual candidates. In Jefferson County, it had the effect of amplifying the voices of third-party groups that do not have to abide by contribution limits over individual candidates.

“Here, the plaintiffs have shown that mounting a campaign on individual contributions is nearly impossible in Jefferson County,” Reeves wrote.

The state registry hasn’t decided whether to appeal, but it has sent a notice to all school board candidates saying that it will abide by the ruling.

Still, other organizations are hesitant to tell candidates to take $1,000 contributions and are worried complaints could turn into investigations between now and Election Day.

“We’ve told our members not to act on the ruling in this year’s elections,” says Brad Hughes, a spokesman for the Kentucky School Boards Association. “It is merely an injunction, and the judge’s decision only applies to the registry of election finance. It doesn’t apply to the attorney general or local prosecutors.”

The association concurred with the ACLU’s argument that the limit was “excessively low” and that it was unreasonable to treat the election campaign of school board members differently than other local elections.

However, the group is worried that sitting school board members could be entangled in a series of complaints across the state, given that the lawsuit was only against the registry. The ruling does not apply to local prosecutors, who were not part of the lawsuit and could therefore ignore the temporary injunction to pursue any violations, Hughes says.

Since the judge’s decision, KSBA has sent letters telling its members not to solicit or accept the maximum allowed donations.

“We feel that it’s just too iffy right now despite the fact the registry said they’ll abide by it,” he says. “We’re trying to do everything we can to reduce — if not eliminate — the possibility of that confusion. We would certainly hope by next year’s elections this will be finalized in the courts one way or the other.”

The General Assembly adopted the Kentucky Education Reform Act in 1990 to improve public education and created the donation limits in school board elections as part of a number of changes.

The language regarding campaign finance was passed to fight corruption in local school board elections because of a growing concern about candidates’ fundraising practices.

Despite successfully overturning the 20-year-long regulation, the anxiety over being charged with a potential violation of state election laws is keeping some candidates cautious.

“I’m going to stick with the $100 limit, because it’s just not settled law yet,” says JCPS board chairwoman Debbie Wesslund, who is part of the KSBA and seeking re-election. “The attorney general, the commonwealth attorney and the county attorney still have jurisdiction, and a person could file a complaint with those offices. It would be risky to go ahead and take a $1,000 contribution at this point.”

In this year’s election, Wesslund is facing three challengers and one — David Toborowsky — has received the coveted nod from the teachers union, which has already authorized an independent expenditure campaign on his behalf in the 3rd District race this year.

Besides differences on various education issues, the two also appear to have different views on what the ruling means for school board candidates.

“I haven’t had anybody write a $1,000 check yet, but I would accept it,” says Toborowsky, who has met with an attorney. “But I plan to double-check again. If I find there’s any doubt, I won’t accept a contribution that high because election law is absolutely scary.”

If school board candidates in Jefferson County are able to tap into that contribution stream, it appears that the federal judge’s decisions won’t be an issue.

In letters sent to attorneys with the ACLU, the offices of Commonwealth Attorney Dave Stengel and Attorney General Jack Conway have stated they will abide by the ruling and forgo criminal prosecutions in this election cycle.

“The different opinions have created confusion, and until the law is actually changed and I get a letter clearing it all, I’m still leery,” Toborowsky says. “But it’s important that we are pushing a conversation, and, without that cap, we can now talk about the issues. It’s good to have an equal playing field whether I win or lose. And I would rather have a fair election.”