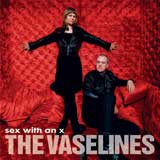 Banging out 12 songs in 13 days is fine when you’re young, spry and broke. The Vaselines did it 21 years later, when they’re older, less spry and presumably not as broke. The Glasgow duo of Eugene Kelly and Frances McKee update their loud fast rules by picking up where they left off from their 1989 debut, and the absence could be partially explained in the title track, as Kelly sings, Feels so good, it must be bad for me. I’ve done too much of all this stuff, that I was warned, do not touch. Or maybe they’ve watched too many of their fellow Glaswegian popsters undergo breakthroughs, and want their own place in the sun. “Such A Fool” is one sunshine-y step in that direction.