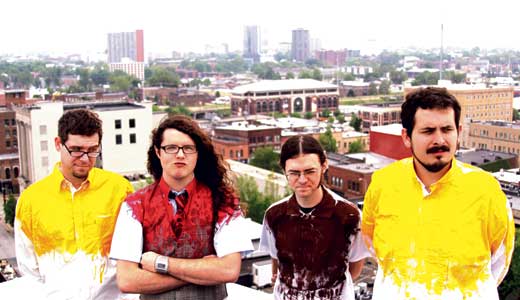 Used to be that street dates meant long lines of salivating customers, cash (or credit card) in hand, waiting outside the record store. When the clock struck midnight and the doors opened, the cash and music flowed.

On Monday, Sept. 20, ear X-tacy will reinstate the long-since-dead ritual of midnight release parties. Dubbed “Monday Midnight Madness,” the store will celebrate the release of Burst, the full-length debut from dance-rock outfit The Pass. Leading up to the sale, OK Deejays start spinning around 9 p.m. The Pass performs at 9:30 p.m., after which OK Deejays return to spin wax until 1 a.m.

Additionally, all records due to come out at midnight Sept. 21 will be for sale, including the new CD from Young Scamels (members of Sandpaper Dolls, Rodan, Rachel’s and Shipping News).

Yes Yes Yes
That’s an orgasm, and the title of the new album by Champaign, Ill., pop-rockers Elsinore, who show up Saturday, Sept. 18, at DeadBird Studios (2200 Crittenden Drive). Recorded in Champaign and Chicago, the album took 1,000 hours to make — singer-guitarist Ryan Groff kept track. “To the best of my knowledge, that’s totally true. At the rate we were paying, for how much money we spent, that’s what the count was,” according to Groff, who says his creative writing classes informed his lyrics. “Even in your fictional songwriting, you’re always talking about yourself most of the time.” His songs tackle themes of divorce, growing up in the Midwest, and what happens inside the human body, biologically and emotionally. Showtime is 9 p.m.

Music ’Cast
Your News Vehicles celebrates the release of Red Hot Zen on Saturday, Sept. 18, at Vernon Club (8 p.m., $10 cover includes free CD). They join us in the offices to talk about the new album. Listen at Bluegrass Catastrophe, bluecat.leoweekly.com.