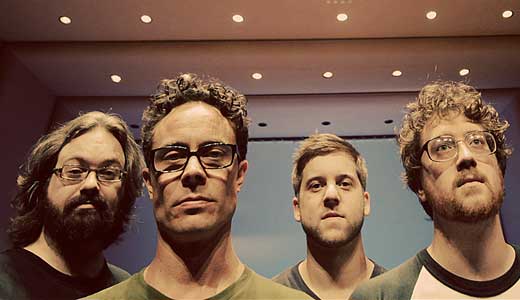 Brian Haas grew up in Tulsa, Okla., listening to a creole of rusty country, folk, punk rock and experimental music. A metropolis of about 1 million people, Tulsa was a stopover for touring bands of all genres, making it an aural playground for Haas.

Haas didn’t pick up the guitar first. He’d been playing piano since age 5, and studied classical music at University of Tulsa. Where classical was a rigorous, curriculum-driven affair, jazz was something Haas picked up from other players.

Jacob Fred Jazz Odyssey formally began in 1994 as a nine-piece funk band — MCs, horns, the whole bit — with a Tulsa twist. “You’re going to be influenced by the Tulsa sound,” Haas says, but the group decided early on to avoid falling into regional clichés. “Being from that part of the country, you’re forced to come up with your own identity. We were influenced by Ornette Coleman and John Coltrane more than we were by anybody in the Tulsa scene.”

In 1999, the band switched to a trio and found their sound mutating further away from funk.

Three years ago, they incorporated pedal steel into their music, earning the tag “red-dirt jazz,” a phrase that refers to the color of the soil in Oklahoma. The genre is said to have originated in Stillwater, Okla., at The Farm, the two-story home of country musician Bob Childers. “There’s been a burgeoning red-dirt movement in the middle part of the country for the last 10 years,” Haas says. “The nature of the lap steel guitar changed the melodic sound and the harmonic sound as well.”

The Jacob Fred Jazz Odyssey released its latest album, Stay Gold, in June. They recorded it mostly live at a studio in rural Tulsa that’s owned by the drummer for Bob Seger’s Silver Bullet Band. Haas says the band records like it writes: democratically.

“Everybody’s involved in arranging the tunes,” he says. “A lot of times, the individuals will come up with the entirety of their part. All of us are speaking the same language.”

Get your Jugs out
Jim Kweskin and Geoff Muldaur led the resurgence in jug music in the 1960s. As founders of the Jim Kweskin Jug Band, the two have a catalog that spans the decades since their first concert in Boston, a chance meeting that proved fortuitous for both fans of pre-World War II music. Muldaur’s recording “Brazil” was featured in Terry Gilliam’s film of the same name, he’s collaborated with Bonnie Raitt and Jerry Garcia, and he’s been an occasional guest on “A Prairie Home Companion.” The duo headlines the National Jug Band Jubilee on Saturday, Sept. 18, at the Brown-Forman Ampitheater at Waterfront Park. Admission is free, and the complete schedule is at www.jugbandjubilee.com.