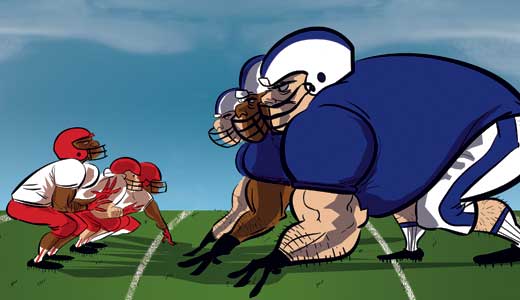 Darrell Royal, the famous Texas coach of an earlier era, had a simple philosophy of football: “Why fool around with all that fancy stuff? When your line is bigger than their line, you just stick it down their throat.”

Which may be exactly what opponents of the University of Louisville are planning for the Cardinals this season — to stick it down their throats. Nearly every opponent on Louisville’s schedule will be bigger, wider, taller, heavier and, presumably, stronger than Louisville’s defensive front line — especially in the Big East Conference.

“You look at Connecticut, you look at Pitt, you look at Rutgers, they all have 300-pound offensive linemen,” says defensive coordinator Vance Bedford, who arrives from Florida with new head coach Charlie Strong, charged with the immediate task of figuring out how Louisville — whose defenders carry concrete blocks onto the scales to come in at 250 pounds — can avoid being steamrollered.

Bedford’s plan is to “load the box” with as many defenders as possible along the line of scrimmage, and he expects his guys to hop around like crickets to make themselves tougher targets for the enemy.

“I’m not worried about the pass game,” Bedford says. “If we can’t stop the run, they won’t have to throw the football. They won’t need to.”

Of course, football has always been about size, as well as skill. But it is amazing just how big the sport has gotten.

The University of Louisville had one of the first 300-pound college players in Ken Kortas — who wasn’t just big, but a top-notch college tackle in 1963, before going on to play for the old St. Louis Cardinals and then the Pittsburgh Steelers.

Louisville got into this situation in the usual way: The previous coach didn’t win, then couldn’t recruit. So the cupboard is left pretty bare. Stars such as Brian Brohm, Michael Bush, Elvis Dumervil, Deion Branch — they’re all gone. And if you peek through the practice-field fence, you see right away there are very few big men on the squad. Four years ago, Louisville was playing in its ninth-straight bowl game. Now the Cards are forecast for as few as three victories this season — if they can beat Eastern Kentucky, Arkansas State, and maybe some other team having a bad day.

How did it get so bad, so fast?

Blame the previous coach, Steve Kragthorpe, who arrived with a strong set of credentials, but quickly found his team mired in mismanagement. The Cards were constantly whistled for dumb penalties, and there were questions about who was calling the plays. Then there was a series of discipline battles. The coach made a public point of running off the ruffians and had a quarterback teaching Sunday school. But things just got worse. After giving a game to Syracuse one afternoon, one longtime fan sighed and said the whole thing reminded him of a Skeeter Davis song — with the words reversed. “What we need around here,” he declared, “is a little less Jesus and a lot more rock ‘n’ roll.”

It’s another broiling hot day in August, with a bright sun beating down on the U of L practice field. It’s nearly 11 o’clock, and morning practice is ending. Players pull off their helmets and head for an air-conditioned locker room — except for a dozen or so defensive linemen who are rolling around on the field, following commands barked by U of L defensive line coach Clint Hurtt.

A special technique — the rolling?

“No, that’s punishment,” Hurtt says. “Rolls, bear claws, back-pedals — all that’s just punishment. They don’t want to chase the ball during practice? I’m going to get it out of them after practice.”

And who is going to object? Hurtt is by far the biggest man on the field, a former defensive tackle at the University of Miami, then defensive line coach at that school before joining Strong at Louisville. He also is the Cardinals recruiting coordinator, with a reputation for finding and signing top talent. Maybe some guys with size.

“We are small,” Hurtt concedes. “Hell, I walk into a room and feel like I’m around a bunch of midgets. I didn’t feel like that when I was at Miami, but that’s what recruiting does. Recruiting fixes that.”

In the meantime, Hurtt says Louisville can compete with the 250-pounders he has — if he can roll away some lingering attitude problems.

“One day they are, and one day they aren’t,” Hurtt says. “You gotta have some consistency. Right now, we don’t. And the issue is maturity. They need to get the losing attitude out of their systems. The guys got too accustomed to just going ahead and taking ass-kickings. That’s the problem around here.”

Hurtt obviously won’t be happy until he’s fixed the problem.

“It’ something coach Strong has us all working on,” Hurtt says. “Right now, there’s an attitude of complacency — thinking if they start things off good, then they can relax. They’ve got to understand football is a 60-minute game. We practice hard. You’ve got to push through.”

There is, of course, plenty of precedent for small teams that win big. A reminder of that came the other day when Alabama was picked No. 1 in the season’s first Associated Press poll. The wire service noted it was the first time Alabama had been picked pre-season No. 1 since Bear Bryant was the coach in 1978. Although the current Crimson Tide has plenty of size, Bryant’s teams were famous for attacking with small, quick linemen, forged iron-tough in notoriously harsh pre-season camps.

Fordham’s “Seven Blocks of Granite” weren’t all that huge, just hard. And Kentucky’s “Thin Thirty” of 1962 held its own with a team reduced to just 30 players by the draconian training camp of coach Charlie Bradshaw.

Could Louisville earn a valiant nickname?

Hurtt laughs at that.

“It’s usually the media who tags a name on a unit, or a defensive group,” he says. “Hell, we’re light years away from that right now.”

No Chinese Bandits? No Strong Stand?“I’m not coining a damn thing.”

Size help is already on the way from Strong’s first recruiting class. Freshmen Jamaine Brooks, 6-foot-4, 328 pounds, from Miami, and Brandon Dunn, 6-foot-3, 282, from Louisville’s Pleasure Ridge Park, have size and potential. But freshmen have to work into college ball.

What Strong is stressing is technique. Learning the skills that can negate a size disadvantage.

“I know if I have everything right, there won’t be anybody who can block me,” says tackle Greg Scruggs, 6-foot-4, 262 pounds.

The confident junior says he’s already improved his footwork, or “footsteps,” as he likes to call it. “I’m going to ask (Chad Ocho Cinco) to get me on ‘Dancing with the Stars,’” Scruggs says. “My footwork is unbelievable — as good as anybody’s on the team, including the defensive backs.”

“Always in the trenches,” Heath says. “You got to love the aches and pains. Getting your fingers mashed, you got to love it. If I didn’t love football, I couldn’t do it — just so some quarterback can throw a ball into a rectangle.”

And, Heath adds, there’s always a chance for points after mashed fingers.

“The thing about defense is you can stop the other team — and every once in a while, you can score. I want to pick up a ball and run it into the end zone and celebrate. That’s what I want to do.”

Which would be something new. Try to remember the last time a big old tackle got his mashed-up fingers on the ball and ran it in for a score. Or a cornerback picked one off and was gone. You have to go back, way back. Back perhaps to the time when Howard Schnellenberger was coach to find a truly hungry U of L defense that would beat somebody up and steal their lunch.

That could change with Strong, who most recently led a defense that helped Florida win two national championships. In Strong’s seven years at Florida, Gator defenders forced 193 turnovers. That’s a tremendous number of fumbles and interceptions. Strong says his teams here will be similarly aggressive.

But there could be an even more striking change for Louisville.

For the first time in half a century, Louisville will not be “Quarterback U.” No Johnny Unitas. No John Madeya. No Chris Redman or Brian Brohm. Not even a mercurial Stefan LeFors. There’ll be no strong-armed quarterback airing the ball out to fleet receivers downfield.

Now comes the spread offense, which spreads players wide across the field. The idea is to string out the defenses, trying to turn short passes and darting runs into long gains. Works well for other teams (like U of L rival West Virginia), but it’s not “Louisville football” in the traditional sense.

“If I had to choose an offense that best fits our team, the spread is what I would choose,” Benevides says. “Usually, it’s the other way around. You find players to fit your offense. But it just so happens that the quarterbacks we have are all in tune with the spread, the offense coach Strong brought in. They’re all speedy, and that gives them the option to also pass the football.”

Of course, Strong understands everything works better with more size. “Little guys are little guys,” he notes. “Big guys look good.” But before he accumulates the hulks he’s been used to in Florida, one gets the idea the new coach might enjoy beginning as an underdog at Louisville.

“I’ve been picked first a lot, never picked last,” Strong says. “It’s great for our football team because the best thing about college football is you get to go play the game — so when the sun sets at the end of the day, we’ll see where we sit.”

Despite coming off a 4-8 season, U of L sold out a 12,700-seat, $72 million addition to Papa Johns Cardinal Stadium, including new luxury suites. So, starting off with a new coach and a “Little Engine That Could” team could be fun for fans. People go for a team that can pull off an upset.

Of course, in the meantime, the Cards will probably get the ball stuck down their throats a few times.

What’s that you say? As long as it’s not Kentucky?