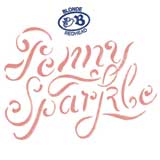 Penny Sparkle is a sauntering, galloping bliss factory named after one of singer Kazu Makino’s horses, an irony considering one trampled her following 2000’s Melody of Certain Damaged Lemons. Here, Makino’s voice is frail and ghost-like, while twins Simone and Amedeo Pace keep their singing and playing intimate, stark and tasteful. Originally an experimental noise band, the last vestiges of that sound are gone. “Will There Be Stars” is an arid romance novella in the vein of Massive Attack, chronicling two lovers as they explore each other. For the first time, the group is working with Swedish producers Henrik Von Sivers and Peder Mannerfelt, and the collaboration is beneficial without feeling song-by-committee. It is also bittersweet: The late engineer Walter Sear programmed the moog synthesizer before he died, and the tones from his decision-making are a lingering fossil.