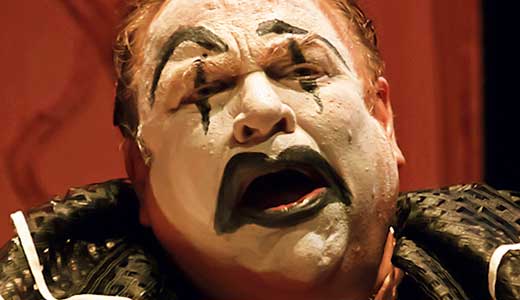 The story structure of the opera “I Pagliacci” is a play within a play, so the plot is a bit tricky. But there’s nothing complicated about the subject: A man feels his life crumbling as he discovers his wife has taken a lover.

“It’s an extremely powerful emotion, because betrayal is something we all fear,” says tenor John Mac Master, who sings the role of Canio — and Pagliacci — in the Leoncavallo opera “I Pagliacci,” which the Kentucky Opera will perform on Friday and Sunday at the Brown Theatre. Also on the program is the Mascagni opera “Cavalleria Rusticana.” The two operas are often presented together because of their brevity, and because they spring from the same period of Italian opera in the 1890s. Plus, they’re both about cheating wives and husbands.

It’s a troubling subject for anyone, says Mac Master.

“We worry, ‘Am I going to be the husband or wife that is blindsided? I never guessed. That went on for years? They had another family?’ You read all those stories and just can’t imagine who those people are.

“But,” he adds, “there’s a part of you, in your most insecure place, that worries, ‘Could that happen to me?’ No matter how confident we are in our lovers, we all fear in our heart that we will be cuckolded — man or woman. That all that we have invested in a love relationship can be turned to nothing in a moment.”

Mac Master, who hails from Canada and Texas, is renowned for his stirring interpretations of the Pagliacci role, including the opera’s famous “Vesti la giubba” aria — one of the most famous songs in music. Mac Master previously appeared with the Kentucky Opera in a 2008 production of “Otello,” staged in Whitney Hall. But he thinks the intimacy of the Brown, as contrasted with the cavernous Whitney, will enable audiences to get close up to the emotions of “I Pagliacci” — especially in that moment when Canio learns his wife Nedda, sung by soprano Elizabeth Caballero, has betrayed him. Canio has seen his wife and her lover cavorting. He has heard them declare they will run away that night after the show. His instinct is to lash out in anger.

“But,” says Mac Master, “the rest of the troupe stops me and says, ‘Hey, the villagers are already on their way. The show is going to begin in 20 minutes. Here is your costume, you’ve got to put it on. This is the business.’”

The show must go on.

“So I’m left with my costume and have to put it on,” Mac Master says. “I think: Play this role? I don’t even know what I’m thinking or saying or doing. The last thing I want to do is put on a show. And he actually sobs on stage. It is one of the most effective moments in opera because we see a grown man cry — with all that vulnerability.”

Then comes the famous aria “Vesti la giubba.” Mac Master says much of the song’s familiarity today stems from television performances. Shows like the old “Ford Theater” and “The Tonight Show with Johnny Carson” often included appearances by Metropolitan Opera stars. The song is short and makes a good visual for television with the sad clown donning his costume.

The piece first hit the “charts” in 1907 with a Victor recording by Enrico Caruso that became the first-ever million-selling record. Bugs Bunny sang it in a cartoon, and a cereal company changed the words from “Vesti la giubba” to “No More Rice Krispies.” Pagliacci, himself, is referenced in a lyric of the Smokey Robinson hit “Tears of a Clown.”

That’s all in Act One. In Act Two, the blood flows.

Kara Shay Thomson and Lester Lynch star in “Cavalleria Rusticana,” written by Pietro Mascagni in 1890. The composer penned the work for a publisher’s competition, which he won. Rather than fanciful court settings and royal characters, “Cavalleria” featured ordinary people (rustics) of the Sicilian countryside. The one-act work spurred the “verismo” movement in Italian opera, of which “I Pagliacci” also is representative. The operas feature separate casts, but both are directed by Kristine McIntyre and conducted by Richard Buckley.