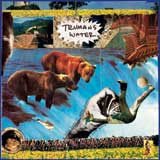 Also subtitled: “Weird for the sake of being weird since 1992.” Longtime experimental outfit Trumans Water specialize in making the sonic equivalent of a grab bag. Reach in once, and you get “Greased Water,” which predates screamo by about a decade. Reach in again, and there’s “Bev Toxin,” a hybrid offspring of post-rock and Dead Milkmen sarcasm. A third time, “Radio Played,” what amounts to a 5-year-old’s interpretation of neo-classical minimalism. No two songs are alike, and with no cohesive sound, you’re lucky to hear anything your brain can latch onto. Tragically, you won’t benefit from the hysteria, and it’s a little hard on the conscience to call this avant-garde, regardless of how long the group’s been together. File under schizo.