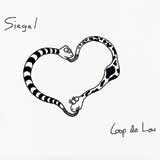 When John Siegel sings, If this is a country, well it’s no place for me on “Misery in the Mountains,” it’s an observation he’s earned the right to make. Much of what’s here brewed for a minute, and it’s a small wonder we’re even listening. Displaced by Hurricane Katrina, the ex-Pocket Foxx guitarist (and onetime LEO columnist) bounced around to Louisville, New York, Shanghai and back, as expats are wont to do. On this debut solo EP, he renovates Holland-Dozier-Holland’s “My World Is Empty Without You,” stripping its Motown in favor of a roots rock update, but on the whole, stays guitar-driven and raspy. The collection remains simple and spur-of-the-moment. Now that he’s settled into one spot, with time to think, this world traveler can focus on translating any inner complexities into music.