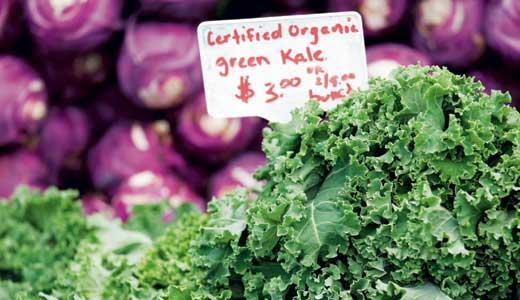 Like most kids, I did not grow up professing my love for kale. Despite my parents’ efforts, I mostly thought of kale as a frizzy garnish that enhanced the presentation of the real food. I can’t say there was an exact time when I magically began liking kale, but I was slowly exposed to greens in a variety of dishes until I had exhausted all of the other leafy options, and kale was the obvious next step in my path of food exploration. Since then, I have had an insatiable appetite for all greens — kale in particular.

Lucky for us local foodies, kale is one of the hardiest plants around and can grow through the winters here in Kentucky. In fact, kale does well most of the time except in the dead heat of the summer. While I absolutely adore the bounty of tomatoes, cucumbers, peppers, peaches and eggplants that fill our baskets and bellies during the warm summer months, as the weather cools and the crisp air signals the arrival of fall, the return of some of these hardier crops consoles me. In the early spring when almost nothing is in season, kale and its relatives are the first signs of life to appear in our fields and on our dinner plates.

Kale is in the brassica family, along with collard greens, cabbage, broccoli, cauliflower and Brussels sprouts. Kale is actually a descendant of cabbage and is considered to be the superstar of the vegetable world. In the health food world, people are always touting the ORAC values of different fruits and vegetables. The ORAC (Oxygen Radical Absorbance Capacity) rating system rates foods on their antioxidant activity level. Kale just happens to be the highest rated member of the vegetable family with a value of 1,770. (Spinach is No. 2 at 1,260.) For those of you whose eyes are glazing over at the thought of computing antioxidant activity, the bottom line is that antioxidants fight free radicals, which are thought to be the cell-damaging culprit of common maladies like heart disease and cancer.

In addition to its abundance of antioxidants, kale is also remarkably high in vitamins A, C and B6, and is a great source of plant-based, bone-building calcium. Kale is also a good source of fiber and protein.

It seems as though there are two camps of eaters: greens lovers and greens haters. I’m fairly convinced that just about everyone would fall into the former category if they tasted well-prepared greens. While I’m a self-proclaimed kale enthusiast who likes it in just about every form, I have a few standout recipes that prove just how delicious kale actually is.

Although it is touted for its outstanding nutritional content, sadly, kale has recently made an appearance on the latest “dirty dozen” list of most pesticide-contaminated foods, produced by the Environment Working Group. The list, which has been around since 1995, is created by testing the average number of pesticides that remain on a washed specimen of conventional produce. It’s designed to help guide consumers toward making safer grocery shopping choices. (EWG also produces a “Clean 15,” which lists the safest foods to buy conventionally.)

Choose greens that are free of pesticides or organically grown. Kale is traditionally an easy-to-grow crop that rarely suffers from disease and pests, so most locally grown options will be pesticide-free — just ask your farmer. Locally grown produce travels less, which means it is picked closer to the time it actually lands on your plate. Kale is also relatively inexpensive and does not lose a lot of volume when cooked down, unlike spinach and chard.

To prepare kale, fill your sink with water and submerge the leaves, giving them a gentle shake to free any particles or dirt. Drain your water and repeat this process until your water is clear and no sediment remains. Once washed, de-stem your kale by holding the stem and pulling the leaves away from the stem. Discard the stems and save the leaves.

Kale Chips
For those of you who have experienced the magic of the kale chip, you know what I’m talking about. For the rest of you, you will have to take my word. Kale chips are a dehydrated or baked version of a chip, but made only with kale and seasonings. They are crunchy, satisfying and as addictive as a potato chip. While this recipe is not necessarily low in fat, the added nutrients make this decadent snack guilt-free. (For those less adventuresome, pre-made kale chips can be found in the raw foods section of natural food stores.)

1 large or 2 small bunches of kale, washed and de-stemmed

A glug or two of olive oil

Tear the kale in slightly larger-than-bite-sized pieces and place in a large bowl. The kale chips shrink in size, and the larger pieces make better chips than the smaller ones. In a small bowl, combine the tahini and soy sauce until you have a runny paste. Add the olive oil, mix and drizzle over the kale. With your hands, mix the kale to make sure each piece is thoroughly and evenly coated. Sprinkle with your sesame seeds and toss again. If you have a food dehydrator, place the chips in a single layer on your trays and dehydrate at 115 degrees for six hours or overnight. To bake, place chips on a baking sheet in a single layer at 250 degrees for 30-35 minutes. The chips should be crispy, and most of the moisture from the marinade should be gone.

Kale Salad
This recipe takes a leap of faith even for the most avid greens lover, because it uses raw kale. Most people are surprised when they taste it, because the leaves seem very tender for being raw. The secret is massaging that kale to break down some of the cellulose and make it more tender.

Chiffonade the kale leaves (roll the leaves tightly and cut into strips as thin as possible) and place in a large mixing bowl. Add the garlic, lemon juice, olive oil, salt and pepper and massage the kale, as if you were kneading dough, for about a minute. Taste and adjust seasonings as needed. Add the avocado and gently stir to combine. The flavors only intensify and get better with time, so this salad can be made up to a day ahead of time — but wait until just before serving to add the avocado.

Roasted Kale
This an easy recipe and one of the first my sister learned in culinary school. It makes a quick healthy and crunchy dish that goes well alongside almost anything.

Cut or tear kale into bite-sized pieces and place in a baking dish. Drizzle with olive oil and sprinkle with salt and pepper. Bake for 10-15 minutes at 400 degrees, stirring once.