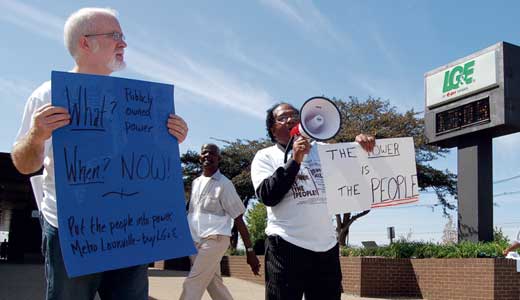 In early May, Sharetha Martin received a letter from Louisville Gas & Electric saying a billing error had occurred with her utility account.

As a customer participating in the federal Low-Income Housing Energy Assistance Program (LIHEAP), Martin, 27, was supposed to receive a $400 credit to her utility bill for the previous winter.

Or so she thought.

“Some of our accounts were not updated for the (credit) payments,” the automated letter read. “Yours is one of those accounts. We have adjusted your account to reflect the actual (credit) received … You should have seen this credit on your ‘other charges’ section of your last bill … We regret the delay in making the adjustments and assure you that the agency or ministry that made the pledge on your behalf was not in any way responsible for this issue. Please accept our sincere apologies for any inconvenience or confusion this may have caused you.

“We value you as a customer,” the letter concluded, “and encourage you to contact one of our customer care service representatives”

But despite the letter’s assurances, Martin never received her LIHEAP credit, her winter bill of $364.60 was never paid and, on May 26, she received an updated bill for $1,548.98.

“I almost collapsed,” says the mother of four. “I called LG&E and was told that I’d get a call back from a supervisor, but they said they could not directly connect me to one even (though) they had the medical statements on file that there are children in (my home who) are on machines that help them breathe … and that they were not supposed to turn off any electric or gas or anything for at least up to 30 days.”

During that time, Martin — who has two asthmatic children — contacted numerous charities across the city to help her with the exorbitant bill, including the community ministry in her south Louisville neighborhood, which has seen a sharp rise in families seeking utility assistance due to the summer heat wave.

“Up until a few months ago, we were turning away roughly 350 families total over the course of a month, and that was for rent, water and LG&E,” says Kate Husk, deputy director of client services at South Louisville Community Ministries. “And now we’re averaging upwards of about 780, and that’s just for our service area that we cover, not for the entirety
of Louisville.”

Husk also says that many clients have complained of LG&E committing similar billing errors, and that “there has been an issue with that sort of thing, and that problem has existed for our pledges that we make (on behalf of clients), as well.”

In mid-July, when Louisville led the nation in above-average temperatures, LG&E shut the power off while Martin was giving her 8-year-old son a nebulizer treatment. Martin has since managed to get her electric turned back on by paying over $800 toward the overall bill, and has contacted LIHEAP, LG&E, the Better Business Bureau and the NAACP — all without success.

And it was just a coincidence that Martin found herself at LG&E’s Ninth Street and Broadway payment office (yet again) on the day of last week’s brown bill rally, so named in reference to the color of the bills LG&E sends to customers in danger of losing service.

The rally, sponsored by the Kentucky Alliance Against Racist and Political Repression, advocated for public ownership of the utility company and, as rally-goer Gail Hellinger put it, to reign in “these faceless entities like LG&E that are not localized and therefore aren’t beholden to the communities they supposedly serve.”

About 30 people showed up for the rally, which lasted for about an hour. Aside from LEO Weekly, only one other media organization showed up, staying just long enough to plant a camera tripod, get some bullhorn-ready action shots, and leave without talking to anybody.

The rally came a day after the utility-regulating Kentucky Public Service Commission held a hearing regarding the $7.625 billion sale of LG&E and its sister company, Kentucky Utilities, from E-On US to the Pennsylvania Power and Light Corp., which reported $930 million in profits last year. The Public Service Commission must render a decision on that proposed transaction no later than Sept. 30.

Kentucky Alliance Against Racist and Political Repression co-chairman David Lott admonished the city’s competing mayoral candidates, none of whom were there to speak “on this most important local issue since (the city-county) merger.”

When contacted for this story, LG&E spokesman Brian Phillips said he wasn’t “aware of any glitches in our web portal that would prevent an agency from pledging aid to a customer’s account. If an agency was having trouble making a pledge, they would contact us to ensure payment is applied.”

The trouble with that is, according to Andrew Melnykovych of the Kentucky Public Service Commission, those glitches have prompted at least 1,000 phone calls to the state regulatory body since LG&E and KU initiated their “web portal” payment system late last year. Melnykovych also says that about 200 of those calls are directly related to LIHEAP billing errors like Martin’s.

“Some people’s money wasn’t getting credited timely, while other people … were getting double credits on LIHEAP,” he says. “And then, lo and behold, three months later when (the system) caught up to them, they were suddenly getting back bills … There were also issues of the system not issuing what’s called a brown bill, which is what you need to qualify for LIHEAP; you need to be in imminent danger of a cut-off to qualify.”

Melnykovych then describes the billing error’s cause, which sounds like a circular, brain-scrambling conversation from the novel “Catch-22.”

“Because they were getting a LIHEAP pledge,” he says, “the system wasn’t kicking out the brown bill because the pledge was being treated as a credit and therefore (the system thought) they weren’t in imminent danger of being cut off. But it wasn’t kicking out the brown bill either, which you had to have for the LIHEAP program. So even though they were eligible for LIHEAP, they didn’t have the proper paperwork to present to get the money.”

The new payment system, which Melnykovych calls “one of the two biggest electric-related consumer issues in the last year or so,” has created such a dangerous limbo zone for the utilities’ most at-risk customers that the Public Service Commission in July ordered an independent audit of billing practices. He says any customers with similar complaints should contact the Public Service Commission.

And while the state agency has yet to select an auditor, the whereabouts of Martin’s missing $400 credit remains a mystery, and she must figure out a way to pay the remaining $700 on her bill.

“I’ve never had to sign up for welfare,” she says. “I’ve always worked. I’ve always paid taxes. I’ve always done my share. And if you don’t pay (this bill), you’re just basically out of luck, and they’ll send you a letter and say they’re sorry and that’s it.

“But that’s not enough,” she adds. “… It’s draining me. I can’t do anything; I’m confined; I’m bound with having to work and pretty much give everything I work for to a company that really doesn’t give a shit about me.”