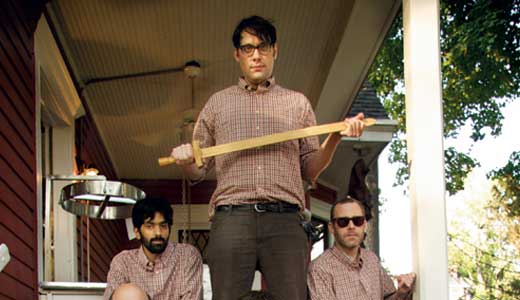 LEO: Why so long between studio albums?

Tim Furnish: There have been many setbacks. Since the 2002 release of the first two albums, Octopus Off-Broadway and Googler, I’ve had what amounts to three major line-up changes. It’s been difficult maintaining a strong line-up long enough to make a cohesive album. People lose interest or go through hard times. It’s been a rollercoaster of a time experiencing many highs and lows trying to craft this most recent body of songs. As bandleader, it’s quite the challenge to manage and depend on a group of folks I’ve brought together to help unfold my vision. We all have our own set of personal complexities, issues and lives to live, and it’s been a constant struggle to channel our energies into making this the best we can. I am super appreciative of all who have played their part. It’s taken forever, but I have finally made the record I wanted to make. I like to think that people who like our music will appreciate that concern. Good things can come to those who wait.

LEO: You’re joined by Jon Cook and Breck Pipes, with whom you have collaborated in various capacities since the 1980s. What was the experience like this time around, now that you all are older and even more sophisticated in terms of taste?

TF: Bringing my old friend and musical comrade Jon Cook, from Crain, back into my musical process has been exciting, though very trying. I’ve had a rather tumultuous relationship with him over the years, and I felt I was taking a great risk in rekindling our musical partnership. Circumstances at the time seemed ripe to bring a positive activity into his life, and I was certainly eager to have his magical touch on my music. He plays like no other. I consider him one of the best drummers I’ve ever known. He had been hanging with our old friend Breck Pipes, from Cerebellum, and suggested we bring him in on guitar to Parlour. It was a fantastic idea. Breck brings a great interest in sound design through manipulating his guitar output with a myriad of effects. In addition to holding down essential patterns, he generates an atmosphere that complements the rich orchestration of everyone else.

Evolved taste is inevitable with age. It’s not always reflective of higher complexity, but perhaps in finding simplicity.

LEO: What goals did you want to accomplish with Simulacrenfield that maybe you didn’t in Parlour’s previous incarnations?

TF: The main goal was to continue with the expanded organic live septet as introduced with the Hives Fives EP, but with a new line-up. This motley group is more aggro and harsh around the edges. With Jon Cook in the mix, I even like to consider it an extension of (Crain). I’ve got a huge repository of musical ideas dating back to 1994 that I keep going back to and pulling from. Several tunes (“Camus” and “Carrier”) on Simulacrenfield were conceived as far back as 1995. I just want to keep forging ahead, building from old sketches and new inspirations. With the release of this album, I want to push harder than ever on getting it heard on a national and international level. For way too long, I’ve not been pro-active enough in getting out there and sharing what we have. I’m gonna give it my all. Hopefully we will gain momentum and become more productive. Fingers are crossed.

LEO: You’re a “Lost” fan. Your thoughts on how the series wrapped?

TF: I think it wrapped up much safer and obvious than I’d hoped for. I was OK with it, but I wished for more along the lines of Faraday’s time/space/parallel universe-cutting-edge-sci-fi-physics-centered explanation. I wanted my mind blown. It was not. It was an incredible series, though.