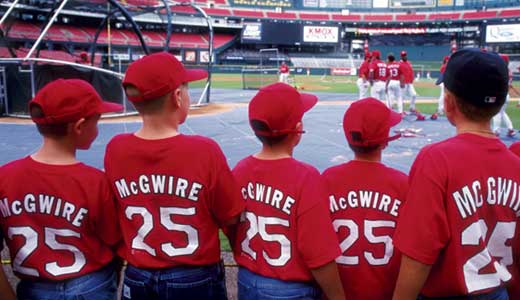 As one of the talking heads in the original Ken Burns “Baseball” series points out, much of the sport’s appeal is its constant presence from April to November. It’s like a best friend that’s always free. Plans fall through? Fight with your girlfriend? Got the flu? Ah, well, I’m sure there’s a game to watch.

Not so during winter. That’s probably why I’ve watched the original 1994 PBS “Baseball” series more than a dozen times, even though it’s almost 20 hours long. Sometimes, you just need to watch footage from the 1976 World Series.

The greatest strength of “Baseball” was that as you were getting your fix of the sport, you also were seeing it through fresh eyes. As a kid, you collected baseball cards and you knew the stats of your favorite players. You gained an important but limited understanding of the sport.

But “Baseball” was made for adults — people who want to understand the history and all the accompanying issues that come along with it. Baseball has been a social glue during wars and economic calamities, but it’s also been divisive, bigoted and greedy. Yes, there was Jackie Robinson, but there also was Ty Cobb, a man so despicable that he makes Albert Belle look like Ray Romano.

Burns and co-director Lynn Novick primarily use Barry Bonds to examine the best and worst of the era: Bonds came up supremely talented (and no doubt clean), but descended into self-obsession as he became a chemically enhanced superstar, tainting the game. He’s contrasted by Ken Griffey Jr., who is not quite as talented as Bonds, but has the advantage of being the type of guy you’d let babysit your kids.

There are real issues with the way Burns and Novick treat the steroid era. By calling out so many people who used steroids, do they imply that others were clean? While we assume players like Griffey, Derek Jeter and Tom Glavine were getting by on natural talent, there is no way to know for sure. Not all people who use performance-enhancing drugs wake up one morning looking like Lou Ferrigno. Alex Sánchez, the first major leaguer suspended under the 2005 anti-drug policy, had hit all of two home runs the year before, his career high.

The biggest issues of the steroid era haven’t been sorted out yet and won’t be for a long time.

Two World Series are covered in real depth: the 1996 Series that heralded the re-emergence of the Yankees, and the 2001 Series that came on the heels of Sept. 11. And while these are undeniably gripping segments, they also remind us of what’s changed since “Baseball” came out. In the era of DVDs, YouTube, MLB.com and ESPN, “Tenth Inning” is relying on footage that diehards have seen a million times.

For many baseball fans, this won’t be an issue. If you close your eyes and can’t picture exactly what Luis Gonzalez looked like as he flared a single over the drawn-in infield in Game 7 of the 2001 World Series, “Tenth Inning” will be every bit the marvel the original series was.

If you can, well, will you really care if you’ve seen it before when you pop it in the DVD player this January?