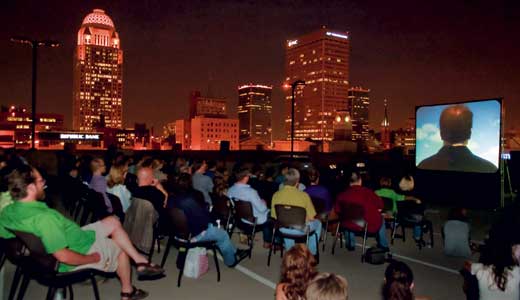 Despite a diverse array of work that juxtaposes grainy, silent films with cyborg-populated electroclash music videos, the program for this year’s Kentucky Short Film & Video Showcase is remarkably fluid. The third edition of this rooftop fest features 13 homegrown selections that include an ethereal, dialogue-driven narrative; a doc about bringing clean drinking water to Haiti; and even the showcase’s first 3-D offering.

The material doesn’t always astound, but as a package, the collection is memorable. Part of this is due to the work itself — a something-for-everyone amalgam that’s solid, never overly indulgent, and dotted with some real surprises. Credit also is due to the men who curated the evening. William Morrow, director of the 21c Museum, and Ryan Daly, the Louisville Film Society’s director of programming, manage to display both their organizations’ sensibilities.

Daly says a majority of the 40 submissions from around the state were worthy of inclusion, but that a focus on how well the selections ran together excluded some entries. Morrow and Daly favored innovative uses of sound and vision to express narrative, often choosing modern, artful pieces that are reminiscent of 21c’s aesthetic. Running time was a factor as well, with the total length of the showcase coming in at a crisp 85 minutes.

“Painting Now! With Chris Chappell” — Imagine Bob Ross on nitrous oxide. Although it’s unlikely you’ll learn to paint from the short film, this “experimental documentary” is giddy, fast-paced and often wonderfully tangential. It also helps that Chappell can paint.

Lora Gettelfinger, “Circumvolution” — This experimental video achieves a meditative ease, stitching abstract images into a seamless collage. Gettelfinger mixes blurry underwater photography, digital static and context-free details like flapping windshield wipers to create atmosphere. Her whirring sound design, a backdrop of distorted ambient noise, is a big part of why it all works.

Also on the bill is a Stephen Kertis video that will incorporate a live performance from Lauren Argo.