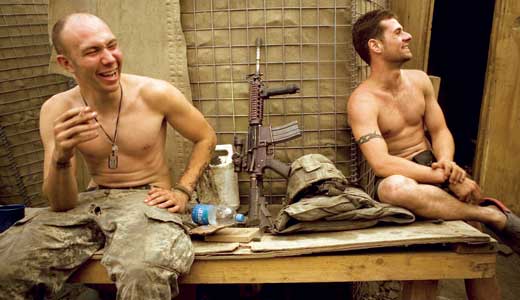 While most of us had our eyes on the surge, CNN referred to Afghanistan’s Korengal Valley as “the most dangerous place on Earth.” It was during this period that video journalists Tim Hetherington and Sebastian Junger were embedded with the Second Platoon, Battle Company on a 15-month deployment in the region. Moments into “Restrepo” — a National Geographic documentary based on Hetherington and Junger’s time with the platoon — we’re jolted with proof of the news outlet’s assertion.

The Humvee carrying the filmmakers is suddenly rocked by an IED. The crew and soldiers are unhurt but thrown into chaos. It’s impossible to know what’s waiting outside as dust and smoke enshroud the vehicle. An ambush is certainly under way, but what is so stirring about this scene is the brief moment when no one on board is sure what to do. For war movie audiences accustomed to standard plot points and stock heroism, the indecision offers a humanized, front-seat view of combat. Who among us wouldn’t hesitate in the same situation?

Throughout the film, the anxieties experienced on screen transfer to the theater seats. The effect of the Humvee attack is a hollow abdominal feeling, a sensation that forges a connection to these baby-faced soldiers, who are undoubtedly experiencing something worse. For those of us who have become desensitized, “Restrepo” reveals anew the horrors of our nation’s lagging war. Its subjects are not the faceless troops we support with bumper stickers and fading yard signs, nor are they the fallen whose names we numbly watch scroll by on the nightly news.

Like a reality show set on a battlefield, “Restrepo” keeps its lens pinned on the key players — some of them still boys who would not look out of place in a high school yearbook. There are no disembodied narrators or “Interrotron” testimonials from expert outsiders to distract us from feeling for the subjects. With this empathy comes an enhanced sense of danger that makes the psychological wear-and-tear of a 15-month military campaign palpable. This peaks when intel comes in on a group of elders who’ve just sold out the platoon’s position to the Taliban.

The unit quietly pushes deeper into the valley with this knowledge. For three days, they hear imaginary clicks in the woods, unable to see the eyeballs collecting in the mountain ranges around them. An assault is imminent. The anticipation in these hushed moments is more terrifying than any of the blasts or strafes that come after it. Which isn’t to say the combat lacks intensity.

“It just rained down hell,” is how one injured sergeant describes the eventual, 360-degree ambush.

Another, less experienced combatant cannot wipe the strange smile off of his face when describing this living nightmare, one that keeps him awake at night. It’s impossible not to be haunted by his beaming, unprocessed trauma, as the young man describes losing his commanding officer in the fight. Hopefully, a military doctor somewhere sees what the camera sees.

Asked if the tour was successful, a proud sergeant responds that his men did their job, establishing an outpost deep in the Korengal Valley (named “Restrepo” for a medic killed early in the campaign). And the bigger picture? Did the Second Platoon catch enough Taliban and win enough hearts and minds? Has the remote outpost made us safer in the United States? Hetherington and Junger let viewers answer these questions for themselves. The key accomplishment of “Restrepo” is that it puts a face on those troops we all claim to support, regardless of our hawk or dove status.