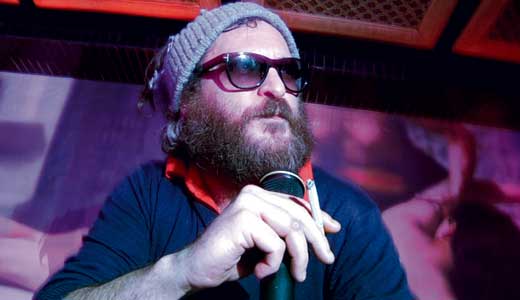 Affleck is the director of “I’m Still Here,” the “documentary” about Joaquin Phoenix’s embarrassing exit and self-imposed exile from Hollywood. On the day his film was to enter expanded release, the director admitted to what most already suspected: The gouty, dreadlocked Phoenix has been playing a role for the past 18 months.

Affleck’s last-minute attempt to reframe this picture isn’t that surprising. “I’m Still Here” fails as a documentary because audiences generally weren’t buying it. After all, making a movie about a guy desperate to get out of movie-making contains a design flaw that’s about as glaring as a Hollywood spotlight.

The “is it real?” chatter the producers undoubtedly hoped would sell tickets didn’t. ($145K domestic gross as of this writing — a lot of that from press and bloggers who were denied advanced screenings.) The authenticity discussion wasn’t that compelling in the first place, in part because rumors about a possible stunt showed up early enough to make it into the film itself — actually fueling a key plot twist.

So what to do with this grueling and, as it turns out, well-acted performance? Some are calling this the best work of Phoenix’s career, but from what context do we watch? Is it a mockumentary? Well, the film is not that funny, and it’s unclear who or what is being mocked. If taken as performance art, it should be noted that the shock of Phoenix’s transformation peaked back in February. His infamous Letterman appearance softens much of the punch that “I’m Still Here” would have otherwise provided.

Speculation about a ruse circulated even back then, and watching it today, there’s something telling about the talk show host’s demeanor. Letterman may not have known what to make of the paunchier, scruffier Phoenix, but this doesn’t mean he bought the act. He’s witnessed some of the best freak-outs in the biz — Andy Kaufman, Crispin Glover, Farrah Fawcett — and the rumors that Letterman knew the score (as one “Late Show” writer has asserted) are believable.

We may very well find out who knew what when Phoenix returns to the “Late Show” on Wednesday night. (Presumably, not as JP, his hip-hop alter ego.)

It will be interesting to see how “I’m Still Here” is received once our collective snark wears off. In addition to trying to pull one over on us, the filmmakers have created a crass piece of work that spends a lot of time laughing at its own lame jokes. Yet, what Phoenix has done here is remarkable in a way, and worthy of perverse curiosity.

For months, the actor held himself up for public flogging. At a number of appearances, he purposely failed and flailed in front of hundreds of camera phones. He remained in character for months while being skewered on talk shows, in tabloids and across the blogosphere. Phoenix may not have fooled everyone, but it’s unlikely you’ll see another actor give himself over to a role like this anytime soon.