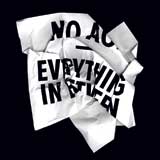 If brevity is the soul of wit, Dean Spunt and Randy Randall must be the funniest guys in the room. The L.A. duo doesn’t mince words, and goes to great lengths to vary the volume war they started on their 2008 debut smash, Nouns. Advancing beyond West Coast punk (but not by much), their pop is a tuneful fury laid bare by blasts of distortion and noise that, over time, could brand them as one-dimensional. Punk-ish leanings manifest themselves on the standard-tuning Sonic Youth of “Glitter.” In the album’s second half, Spunt and Randall deviate from their drum-and-guitar syllabus with a pair of instrumentals that make Everything less procedural: the pastoral thump of “Dusted,” the EBow- and piano-inflected “Positive Amputation.” Those are, in the end, brief diversions; No Age closes the record with the Pistols pogo of “Shred and Transcend” and the Pixies-esque sing-along, “Chem Trails.”