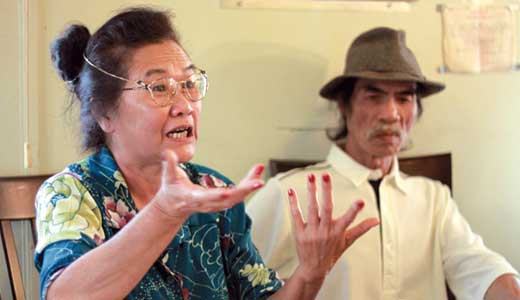 It’s been more than 35 years since Gen. Van Tien Dung and the North Vietnamese Army sacked Saigon and ousted American forces forever, just enough time for the second generation of Vietnamese-Americans to grow up and inquire into the histories of their refugee parents who were ushered into Louisville throughout the ’70s and ’80s.

The “Tieng Nói Luu Vong: Moving Voices” oral-history archive now on exhibit at the Crane House is both the result and record of intra-generational curiosity. Over the past year, twentysomethings Dede Tran, Quang Le, Frank Bui and Tam Duong have sparked the initiative behind this vast project, compiling and translating hours upon hours of individual narratives into English and Vietnamese.

The digital archive spans more than 65 years, from the final days of Vietnam’s last emperor, Bao ?a, to current Louisville grade-schoolers who carp about their parents’ strict rule over their lives. The voices range from South Vietnamese soldiers to incarcerated Vietnamese poets, and even American veterans and nurses. Photos from interviews provide visual links to the testimonies, while artifacts such as diaries, letters and immigration cards fill out the display.

Bryan Warren, executive director of the Crane House, jumped at the chance to collaborate with the Vietnamese community. “Just think if we could’ve archived the narratives of Irish and German immigrants who came to Louisville at the turn of the 19th century and what valuable resource that would be,” he says. “We have that opportunity now with our Asian communities.”

More than highlighting Louisville’s Vietnamese population, “Moving Voices” alleviates some of the stigma associated with the Vietnam War. For those afflicted by the strife, the memories remain too painful to recount, and many Americans still consider our involvement a point of national shame. No matter how you approach it, the Vietnam War drastically changed the way we thought about war. Television brought the fighting home and the death toll to the dinner table. The images upset us and prompted the public to dish out blame, often to returning soldiers who were drafted to fight.

In many ways, the debate over the Vietnam War dwarfed the people the war was waged to protect. Vietnam scholar John Ernst, a Louisville native who’s an associate professor of history at Morehead State, says we must learn to transform our thinking from “Vietnam the war” to “Vietnam the country.” Ernst — who was interviewed and also conducted many of the interviews with the American Veterans (mostly through Vietnam Veterans Association Chapter 454 in Jeffersontown) for this archive — also maintains that until we dissociate the war from the country, it will continue to be the “war that never ends.”

Perhaps the most unique contribution to this oral history archive comes from former South Vietnamese Army soldiers. In the past, Ernst had trouble finding any veteran SVA, much less getting them to open up. It took this kind of interest and appreciation on behalf of the Vietnamese community to unlock their stories.

For example, Ly Giong Slau was a CIA operative and member of SVA special forces during the war. His digital narrative opens with a picture of 10 young soldiers on beach during shore-leave. As Slau recounts, the group of friends went back on their separate duties the next day. When Slau returned to the laundry a week later, he saw the majority of his friends’ clothes still waiting for them. He knew instantly that seven of the 10 pictured were dead, their bodies never to be returned home or put to rest. Soon after, NVA forces captured Slau and held him in a concentration camp for 15 years.

In prison, Slau met his wife, Van Thanh Pham. Now a widely anthologized poet, Pham was incarcerated at 17 for her college entry essay “Vietnam Democratic Republic — Freedom, Happiness, Where Are You?” Pham grew up in a fairly conservative, Communist household. Always imaginative and curious, Pham instinctively considered how her country could be different and bravely questioned the practices of her government. The first time Slau and Pham met, Slau begged for a pencil and paper so they could write notes back and forth. By this meager correspondence on bits of paper, the two fell in love.

“Moving Voices” also highlights another overlooked legacy of the war — “Amerasians” like Nhung Le Thi Kim. Amerasians are the children of Vietnamese women fathered by American servicemen. Both in the United States and in Vietnam, their bi-racial status often alienated them. Like many other Amerasians, Kim has never met her father. After discussing her struggles of assimilation, she displays her marvelous voice with a Vietnamese folk song.

Van Tran — Dede Tran’s mother and chair of the Oral History Project Committee — has two goals in mind for this project. First, she wants to create Louisville’s first Vietnamese oral history archive; second, she wants to extend this exhibit as a token of gratitude for all the American men and woman who sacrificed so much during the war. “It took us a while to integrate into this culture,” Van Tran says. “It was hard, but we were able go to school, get a job and have a family. I cannot describe what a blessing it was to come here as a refugee and have the same opportunity as everybody else. That’s just not possible anyplace else.”

Ultimately, “Moving Voices” demonstrates how history doesn’t begin with books or television, but with people in a room sharing experiences. It was born out of the simple desire of our community to know where we live and to enrich our collective narrative with all the voices that are yet to be heard.

During the Q&A on opening night, a woman named Hao Tran stood and told her tale of religious persecution and escape from North Vietnam. She and her husband, both Catholics, lived in hiding for more than a year before being granted refugee status to the United States. Hao — who was neither interviewed or a member of the project team — just came to see the exhibit. As she spoke, it was easy to look around at all the other faces in the makeshift auditorium and wonder what they could contribute. The audience and the stage merged into one.

The Crane House will host a “gallery talk” with the project team on Thursday, Sept. 30, at 6 pm. The event is free.