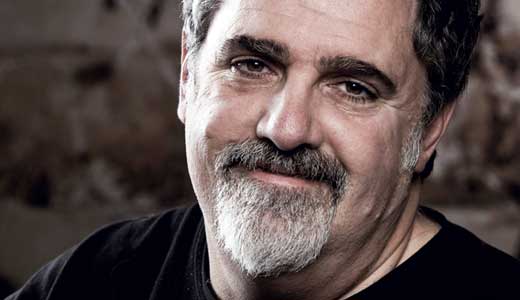 If you combine the box offices from movie producer Jon Landau’s two biggest hits, it would surpass the gross domestic product of 63 nations (based on estimates from the CIA’s World Factbook). The James Cameron-directed blockbusters, “Avatar” and “Titanic,” have raked in more than $4.6 billion — not including the theatrical re-release of “Titanic,” currently being converted to 3-D. Cameron and Landau rode “Titanic” to an Academy Award for Best Picture in 1998.

The producer will arrive in Louisville for this year’s IdeaFestival as the featured presenter of the Kentucky Film Lab Workshop on Saturday. Landau took a moment to speak with LEO about how to make a hit, how to bring film to Kentucky and the future of the “thank-you cam,” a recent feature on awards shows that Landau helped bring about after thanking an astonishing 55 people during his Oscar speech.

LEO: Everything written about you is prefaced with “producer of the two highest-grossing movies of all time.”
John Landau: I’d rather it be “father of Jamie and Jody Landau.”

LEO: Surely there are perks that come with box office success, but what are some of the unforeseen drawbacks? Are there any?
JL: Oh, I think there are. For one, I’ve envisioned going through life with a bit of anonymity. It’s harder and harder to do that. When a person on the street goes, “Hey man, loved your movie,” it’s like, are you talking to me? How’d you even know it was me? Then another person goes, “Your movie wasn’t as good as everybody said it was!” Wait a second. You begin to question everything you do. If someone’s going to recognize me, I don’t have the same personal freedom that I had before. That’s been a little surprising to me anyway.

LEO: So how do you make a hit?
JL: Let’s just be clear — it’s Cameron. Look, Jim is the auteur. But, having said that, what we try and do is present themes that are bigger than their genre. The theme is something you walk away from the theater with. It stays with you. The plot, you leave at the theater. So, if you can make a movie that has relatable themes on a universal scale, and you wrap it up in a world with characters that are engaging and exciting, it will make an audience remember why they went to the movies. Try to give people something to take away, so that sense of escape lingers. I think that’s when movies work.

LEO: While making “Dick Tracy,” star Warren Beatty said your best producer quality was that you “dream the movie.”
JL: What you do on any movie is you try to break new ground. You try to create something that hasn’t been done before. To realize the uniqueness of a project, you have to dream about it. It has to absorb you. I think what Warren was saying was that you have to become one with the project. When we’re not making a movie, I might dream about taking my family to Africa. But when I’m on a movie, it’s about that. You have to do that in order to pull these things together.

LEO: In a “60 Minutes” interview, Cameron said he told the “Titanic” cast something like, “You may hate me by the end of this, but we’re going all the way.” Does he say that to producers, too?
JL: With Jim, as with any great director, there are moments in the process, like in a marriage, where you get frustrated by the other person. But the next morning, you can’t imagine doing it with anybody else. There’s nobody Jim values more on a movie set than the cast. He realizes that whatever he throws at it, whatever action or visual effect, it means nothing without the performances.

LEO: Talk about the decision to convert “Titanic” to 3-D.
JL: There are certain properties that warrant re-release from 2-D to 3-D, and we believe “Titanic” is one of them. We will only do it because we have the time to do it right and because Jim Cameron will be a part of that process. So we feel very comfortable in doing that.

LEO: Aesthetically, is there something about “Titanic” that makes you think it would be a great 3-D movie? Like when the ship breaks in half and bodies go flying everywhere?
JL: I think it’s the other scenes. I think it’s the scenes between Jack and Rose. It’s about the intimacy of the moment and not the spectacle.

LEO: As a result of “Avatar,” this technology is spreading to TV, video games, even cell phone screens. Is it overblown a little, or is this what we should come to expect, like color TV in the ’70s?
JL: I think black–and-white to color is a very good analogy. Historically, we had color films in the 1930s. But it wasn’t until the 1970s that it became ubiquitous. Television became color, and it forced movies to compete with it. There used to be movies that looked at color as an excuse to make the movie — “Oh, let’s do this in color, it’s a big musical!” We’re seeing some of that now, where people are saying, “Wow, let’s make it in 3-D, and it’s a better movie.” Well, it’s not. It’s just a bad movie in 3-D. So, I think we have to make good content — period — in 2-D or 3-D. But, down the road, all of our screens, from our mobile devices to our computers, will be in 3-D.

LEO: Another breakthrough you had a hand in is the “thank you cam.” Do you think that’s here to stay, and will it change acceptance speeches on award shows?
JL: I look at the Oscars as not a celebration of one or two people. It’s a celebration of the hundreds of people it takes to make any movie. I think it is about the thank-yous — more than the political speeches. You should do the political speech backstage and the thank-yous on stage. Why is it that two people are onstage accepting an award, especially for Best Picture, that is the work of hundreds of people? And, I’m sorry, if it takes 28 seconds (to thank them), then it takes 28 seconds! I think it’s more important for viewers to see that we appreciate those who work around us than to see another dance routine.

LEO: So, have you spent much time in Louisville?
JL: I have not. But I’m looking forward to it. I’m coming in ahead of time so I can see a little bit of the city. I’ve heard really great things.

LEO: We have at least a dozen film festivals, and a growing number of professionals are trying to attract more film to the state. As someone who produces big-time movies, what sort of advice would you offer an upstart film commission in a state not yet known as a destination for film and TV?
JL: Figure out how you’re going to put yourself in front of the other locations that you’re competing with. And, ask yourself: Why are people going to come here? That can be a lot of different things.

Robots and the Future of Conflict in the 21st Century — noon-1 p.m., Kentucky Center

The Age of the Fusionista, The New Geography of Bright Ideas and Rise of Gandhian Engineering — 4:30-5:30 p.m., Kentucky Center

Festival of the Written Word: What is Literary Louisville — 10:30 a.m.-noon, Kentucky Center