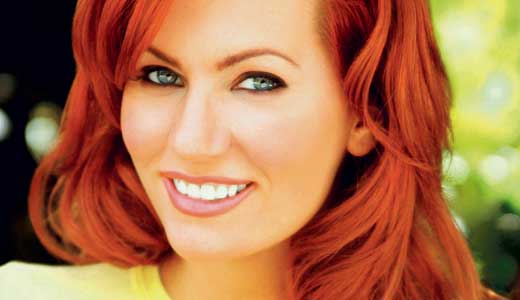 To look at April Macie, you might think she fits in more in the pages of one of those magazines you’d find underneath a 16-year-old boy’s mattress than on stage at your favorite comedy club slinging “dick jokes” … but you’d be wrong. She was a finalist on NBC’s “Last Comic Standing” and is featured in the new Showtime documentary “I Am Comic.” Macie will be performing Thursday at Kye’s in Jeffersonville for Tickled Pink, a comedy show that is part of the River Crossing Festival and benefits Susan G. Komen for the Cure.

LEO: Was comedy something you were drawn to even as a kid?
April Macie: No … I never thought anybody liked me, so it never really dawned on me that comedy was something I could make a living at and do. It was years later that I realized I had no other life skills. So I kinda fell into comedy.

LEO: You say you didn’t think people liked you, but surely you must’ve been the popular girl that all the guys fantasized about — like Phoebe Cates in “Fast Times at Ridgemont High.”
AM: No, I was the girl in high school that everyone decided to start a horrible rumor about. My first boyfriend said I pooped on his couch, so four years my nickname in high school was “Doo-doo Brow.”

LEO: Why does a shitty childhood seem to be a universal theme among stand-up comics?
AM: I think it’s a desperate need just to feel liked. Because whether it’s your family, or at school, you’re always looking for some sort of validation from other people. So when you go into a room in front of 100 people, 300 people, 1,000 people — you think, “Everyone likes me now.”

LEO: You’re funny and beautiful … does that put you at an advantage or disadvantage knowing that every guy in the room wants to sleep with you, and every girl wants to be you?
AM: I had no idea that was true … now I know it, that’s exciting! I had no idea … really? I’m kinda wacky, I don’t know if every guy wants to be a wack-a-loon.

LEO: I think all guys are kind of expecting to be with a wack-a-loon at some point.
AM: Really? That’s exciting!

LEO: What makes sex so universally funny?
AM: Everyone’s doing it, and those that aren’t want to.

LEO: What’s your worst sex story?
AM: I was performing in Vegas, and I hooked up with this comic, and I guess I wouldn’t go all-the-way with him. We were in his room, he ended up leaving in the middle of the night saying he had to go get some aspirin. But he took my room key and slept with a hooker in my room while I was asleep in his.

LEO: Is there anything you wouldn’t do to get a laugh?
AM: Probably not. I need it. I need laughter so bad. It fills my soul.

LEO: I asked your ex-boyfriend, Mitch Fatel, for some dirt on you few weeks ago. What do you think he said?
AM: Oh … I have no idea. What did he say?

LEO: He said, “There’s really no dirt about April except don’t get on her bad side, and don’t let her think you’re flirting with anybody else in front of her or … she will kill that woman.”
AM: Oh … that’s not true! That’s ridiculous.

LEO: You dated Fatel for a long time — is it healthy to put the volatile personalities that come with being comics into one relationship?
AM: No. It’s too competitive. With a comedian, it’s just one person on stage, and there’s a certain level of narcissism that goes with wanting to be a comic. So having two of those people in the same relationship, you can’t help but to be competitive, and as a woman, I think you let it slide a little more — but it’s harder for men.

LEO: So you think it’s hard for men to be in competition with their significant other?
AM: I think men are more into competition and forget that you’re their girlfriend, and you just become another comic.

LEO: In that respect, do you think it’s harder for women in the comedy industry?
AM: Oh yeah, they hate us. We’re a back-of-the-bus mentality. It’s amazing to me, there are great female comics — there just aren’t as many of us. It’s a hard life, you’re on the road a lot. Everyone of us is destined to become a barren spinster, because we spend so much time in La Quintas in the middle of nowhere. You sacrifice a lot, and no matter what you do, they try to diminish what you do. It’s like they try to take it away from women.

LEO: Why do you think they try to take it away?
AM: It’s not a feminine art form. You go up there, you’re on stage, you’re in a position of control and power — and I don’t know if a lot of people are completely willing to relinquish that control and power over to a woman. It’s kinda startling.

LEO: When the biography on April Macie is written, what will the title be?
AM: “From Slut to Stand-up” — I’m pretty sure.