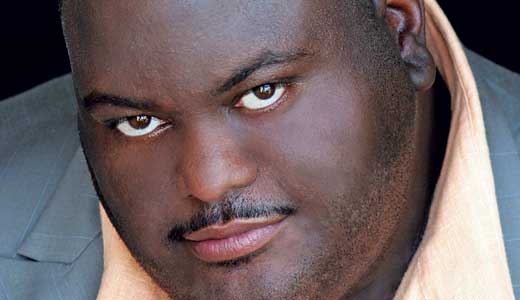 Chances are, you know who Lavell Crawford is, although you might not recognize his name. The soon-to-be-dad is a regular panelist on “Chelsea Lately” and will be shooting an hour-long special next month. He’s developing a show with Ralphie May called “Brothers From Another Mother.” He’ll be performing at The Impov this weekend.

LEO: Are you excited to become a father?
Lavell Crawford: Oh very excited! My first one’s a boy … you can’t beat that. I’m hoping he’s a night baby — if he’s a day baby, we’re gonna have some problems, because I’m always up at night. I’m a comedian.

LEO: Since you found out you were going to have a baby, has it affected your material at all?
LC: Yeah, you gotta add that in. I talk about my life anyway. I’ve got steady jokes, then I talk about everything that goes on in my life, so yeah, it’s part of my life.

LEO: Have you been through Louisville before?
LC: Have I been there before? Oh man, several times … man, I started out at Funny Farm before it became Comedy Caravan. Now I’ve moved on to The Improv.

LEO: When did you know you wanted to be a comic?
LC: I guess when my mom was trying to kick me off her couch. I was trying to find my way, I was goin’ to school, and that wasn’t pannin’ out, and I was watching stand-up comedians on TV, because they were just starting to come out. They had them on MTV and Comedy Central, and I was like, wow! Also, my cousin’s boyfriend, Percy Crews, was a stand-up comedian, and when I watched him, I was like, “Damn, I didn’t know black guys did comedy other than Richard Pryor.”

LEO: There were some struggles in your upbringing — did that help people relate to your material?
LC: Oh sure. My father wasn’t in my life all of the time. Strangely enough, we had a chance meeting, and he’s sort of back in our lives now. It’s weird having Dad back, so I make jokes about it. He’ll say, “Y’know, Father’s Day is coming up.” And I’ll be like, “Yep, it came up 30 times. It ain’t like you’re gettin’ anything from the store. I’ll get construction paper and put some macaroni glued to it — and you can tell people you got it from your 41-year-old son.”

LEO: You’re a regular on “Chelsea Lately” — why have people responded to that show so well?
LC: I guess because Chelsea’s funny. All the trash they talk about. And they have a lot of guests on there now that people relate to. It’s the only thing on E! worth watching. It’s a fun show.

LEO: It certainly is giving a lot of comics career boosts.
LC: Chelsea’s show is a great place to shine, but you have to get on there and be able to think off the top of your head. First time I was on there, I was a little nervous, because I don’t usually talk about celebrities. I’m funny, I know I can do it, it’s just not my cup of tea.

LEO: When you all spar with each other at the table, do anyone’s feelings ever get hurt?
LC: I don’t know, and I don’t care. (laughs) You shouldn’t be on there if your feelings get hurt. I pick on some guys, and Chelsea picks on a lot of people, but if you ain’t got thick skin, you shouldn’t be in the game anyway.