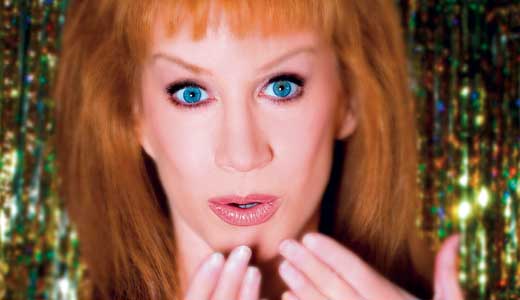 I wanted to ask Kathy Griffin if giving an interview to this silly little alt-weekly rag in Louisville affirmed her D-List status, but I couldn’t get a word in. She commandeered the 20-minute interview, asked me just as many questions as I asked her, and scolded me for not being able to come to her two shows Saturday at Horseshoe Casino.

Kathy Griffin: Is the L in L-E-O for Louisville?
LEO: Yep.
KG: Fantastic. You know I have a key to the city? I just think you should know I’m practically the mayor at this point.
LEO: We could use a tough broad … how good are you at building bridges?

LEO: You’re doing two shows in one night at Horseshoe Casino. Is that a common thing for you?
KG: We call it a double. I am in popular demand, and I hope they put that under the door of everyone’s hotel room.

KG: What exactly is the Horseshoe?
LEO: It’s a boat … with slot machines. At one point gambling wasn’t allowed on land, so it cruised the Ohio River. Now I think it just stays docked.
KG: It’s only a matter of time till you can just shoot people on land. And I will be shooting verbal bullets that night. I have a disclaimer: My live show isn’t for the faint of heart. Do not bring your children — although if you’re bringing your children to a riverboat casino for the second show, you might wanna get some help anyway.

It’s gonna be an evening of swearing and negativity. We’re going to be talking about all the important, life-changing topics, like how is Paris going to deal with her latest drug bust? What is Lindsay going to wear to her latest court appearance? Maybe we can have a Lindsay Lohan adoption booth outside where people can volunteer to foster her. I was at the Emmys last weekend, so I’m going to bring all the Emmy dirt that I can’t say on television.

LEO: Do you have a title for this tour?
KG: No, because I’m always on tour. The nature of my material is that it reflects what’s been going on recently. I’m kind of like the Nancy Grace of inappropriate material, and, by the way, so is she. I don’t only want to do a tour from June to August, because who knows what Nancy Grace is going to say in October. And by the way, why is her new book called “Death on the D-List”? I’m fearing for my life. I’m already fearful of assassination attempts by Seacrest and Oprah.

LEO: How are you preparing for Oprah’s last season?
KG: I’m not doing well. It’s an emotional journey for me much more than her. She’ll be fine. I don’t know how I’m going to survive it.

I think it’s funny that she’s decided to make her final season basically one long reality show, because she’s always been so snobby about reality TV. I never thought I’d have a perspective that Oprah doesn’t. When I heard that she’s gonna let cameras follow her for her final season, I said, “Honey, honey, you do not know what you’re in for. You don’t know that you can’t even take a pee without the sound guy hearing you.” It’s fun, but you have to take some kind of humiliation. And I think we know the one thing O doesn’t do is humiliation. So I’m on pins and needles.

LEO: The new “Dancing with the Stars” cast — love it or hate it?
KG: OK, first of all, as someone who produces a double Emmy award-winning show, I would have written a blank check to Levi (Johnston). Kate Gosselin got the highest ratings in the history of “Dancing.” Because of her, “Dancing” beat “American Idol” for the first time in history. Look, it’s painful for me to hear, too. I’m not happy about it. The point is, Hasselhoff will be a fun train wreck, Bristol (Palin) will be a fun train wreck — I can’t believe they couldn’t find a way to throw Levi in the mix.

LEO: Would you say your mom is an A-Lister?
KG: Absolutely. I took my mom to the Emmys, and she was recognized so much more than I was. And also, the celebrities that come to me with disdain — Sharon Stone literally running from me at a party — all those people go to my mother with nothing but love. Some ask to be adopted by her. I can’t tell you how many people want to make an actual appointment to share a box of wine with her. My mom is like the octogenarian Miley Cyrus before Miley got on the stripper pole. Remember when Miley was sweet and innocent and we didn’t know she was going to start stripping? That’s who my mom is right now.

LEO: I recently saw you in the Joan Rivers documentary. It was interesting to see her so unplugged, so to speak.
KG: That’s what’s great about it. She’s puts it all out there. One of the reasons she’s my idol is because she’s just a really, really sweet lady. I’m fascinated by people like that. There’s all these celebrities that people think are mean, like Howard Stern or Bill Maher, when in fact they’re actually very nice, unlike Sharon Stone, but I digress.

We’re pals, and she’s been a friend to me as well as a mentor. What’s great about the documentary is it’s great to see her get the respect and accolades she deserves. It reminded younger people that she’s really Chris Rock. When I was younger, she was punk, badass, dangerous — long before she said, “Who are you wearing,” which, by the way, started its own separate industry, which Ryan Seacrest then co-opted. I just love that Joan is still very much pushing the envelope regardless of being a female trailblazer. She’s helped me a lot to not get bogged down with so-and-so thinks chicks aren’t funny, this person that runs the network said, “We already have one female-driven show.” I’m like, “You have one female-driven show? Half the population is female.” She’s helped me navigate those waters and put up with that.

KG: I’m actually looking forward to the Horseshoe, because I think I’m going to get a very diverse audience, and I like that. At a casino, you get the high-rollers who were just given comps. And you get the people who made the special trip. And then you get the people who were just so happen to be playing slots and needed a little break.
LEO: I know the gays in full force — they sold out your first show.
KG: A lot of people tell me not to play the Southern markets because you won’t get the gays and the women, and I’m like no, no, no, they’ll make the drive. The Louisville gays will make the drive.

KG: At the casino, do they serve the Louisville hot brown?
LEO: I don’t think so.
KG: That’s something I’ll have to make Tiffany go get for me. All I really care about on the road is fun, fun food.

KG: Are you going to come to the show?
LEO: Well, unfortunately I have a pub crawl that same night — I’m bummed.
KG: A what? Did you actually just tell me you’re turning down free tickets to my show to go to a pub crawl? You know that you’re in my act now. When people say, “Oh, Kathy, you’re not on the D-List anymore” — I’m gonna say, “Oh no, I was doing an interview and offered the person free tickets, and they said, ‘I sorry, I have a pub crawl.’” Tiffany is going to love this. She’s gonna want to go with you! Frankly, I can’t top a pub crawl.

I don’t want you showing up drunk to my late show. You’re gonna be the girl who passes out and says, “I think Paris is innocent.” And then you’re gonna do a faceplant.

KG: One last thing — I have a dirty little secret. I’m waiting for straight guys to figure out that the best way to get laid is to come to a Kathy Griffin show. Think about it: It’s all girls and gay guys. If you’re a straight guy and you can’t get laid at one of my shows, you have no game. I’m reaching out to the straights.