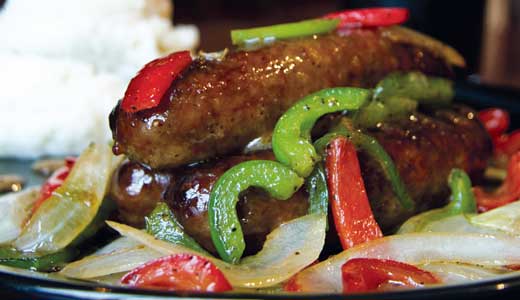 After hearing the buzz about the Tilted Kilt, 6201 Dutchmans Lane (the former Ernesto’s building, Oldenburg before that), I considered checking it out. But hey, Hooters is like an old friend; I didn’t want to
be disloyal.

Still, the reports I got said Tilted Kilt — part of a chain of pseudo-Scottish-themed sports bars based in Tempe, Ariz. — was better than Hooters, especially in one signature department: Female service staff wear red plaid mini-kilts with matching tops that don’t cover a whole lot. Kind of trumps the orange shorts and suntan panty hose, eh? One guy I know remarked, “If you go to the Tilted Kilt, you’ll never go back to Hooters again.”

So my friend Amy and I dropped by the Kilt recently for an unofficial Hooters vs. Tilted Kilt showdown. Let the cleavage wars commence.

The well-polished if somewhat corporate décor at TK could be called Brendan’s meets Beef ’O’ Brady’s. The menu features relatively pricey fare ranging from the usual (wings, sandwiches) to signature dishes like shepherd’s pie ($9.99) and the Fat Bastard meatloaf sandwich ($10.49). Many of the dishes seem to have identity crises, however, much like the restaurant itself. (Example: Irish Nachos. Huh?) At least Hooters knows what it is. Advantage: Hooters.

Amy and I started with the Drunken Clams ($13.99), which consisted of a couple dozen cherrystone clams steamed in a garlicky sauce. They were outstanding, and our server was happy to give us extra garlic bread for dipping. On the other side, thanks to BP, Hooters rarely has oysters these days. Advantage: TK.

We then split an order of Kilt Burner wings ($8.99), which were so-so and barely even spicy, as well as a Longshank’s Sausage Sandwich ($8.49), which featured sliced braised sausage topped with onions, peppers and plenty of provolone. Not bad, but nothing special. (And what’s with the Freudian name?) Meanwhile, Hooters’ traditional wings stink, but their Daytona Beach wings are tasty (and not breaded), and the grilled chicken sandwich is under $7 and always outstanding. Advantage: Hooters.

As for the staff, our server was a friendly, upbeat young lady named Irina who was more than happy to answer our questions and take care of our meal. True, the cleavage bordered on distracting (I caught myself not watching the game a few times). Heck, Amy said it even distracted her. Hooters has been hit-or-miss for years on its service, and sometimes even on the eye candy. Advantage: TK.

There you have it, guys — I give Hooters the edge from a menu/value perspective, but the Kilt has a decided advantage in the cleavage department. You get to make the final call. —Kevin Gibson

The Irish Rover has been my comfy neighborhood pub for a long time now. We moved back to town from exile in New York City in 1994, not long after the Rover had opened its authentically Irish digs in a historic Crescent Hill building that began life more than 150 years ago as a saloon.

For a long time I thought of the Rover as primarily a place to grab a pint of real Irish Guinness, properly pulled and served at the correct temperature, with fish-and-chips or a Scotch egg serving merely as a base for more pints.

Lately, though, I’ve branched out and begun to recognize the Rover as a dining destination in its own right, its menu an equal partner to its undeniably worthy, if compact, lists of beers, wines and spirits. The pub burger ($6.95), lamb burger ($8.95) and even the salmon burger ($7.95) are all fun on a bun; Chicken Cashel blue ($14.95) and Guinness Beef Stew ($6.95) have passed muster; as have the smoked salmon salad ($6.95) and the shrimp salad ($8.95) when I was in the mood for something light.

But the most intriguing eating of all is found on the Rover’s Bar Bites menu, a selection of small plates ranging in price from $2.95 to $8.95, that offers an Irish analogue to such other international bite-size goodies as tapas, meze and dim sum.

They’re all good, but I’m here to tell you about the most addictive small-plate snack ever. My wife, Mary, our pal Sarah and I wandered by the Rover the other night, and on a whim I ordered the salmon potato puffs ($4.95).

Out came a trio of perfectly fried golden rounds garnished with leaf lettuce, diced fresh tomato and a dollop of dill-scented mayo.

Sarah took a bite and her eyes lit up as if she had seen a band of seraphim winging across the twilight sky, bearing next month’s winning Powerball number.

Robbed of speech, she gazed into the distance with a beatific smile. Finally she spoke: “They are crazy good,” she said. “Crunchy, crack-a-licious good. They are so good they will sober you up.”

Imagine a ping-pong ball-sized round of creamy mashed potatoes, subtly infused with the flavors of finely shredded smoked salmon, green onion and dill, dredged in a rough-textured breading and fried to a beautiful, utterly grease-free golden brown. Bite down gently and the coating breaks with an appetizing crunch, unveiling a steaming, delicately scented interior. Two bites, another, and poof, it was gone.

Smitten, we ordered a second round, and then a third. Sarah demanded a fourth, but we dragged her out before she could catch the server’s eye.