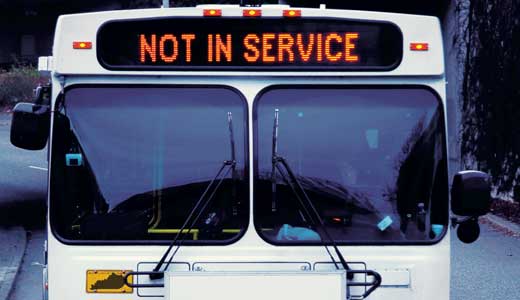 When the city of Columbus, Ohio, opens its new Amtrak line in 2012, Louisville will officially gain a new (but onerous) distinction: being the largest city in the nation without any form of modern mass transportation. And with only one of three mayoral candidates advocating public transportation as an integral part of their campaign platform, it seems the River City’s chances of enjoying efficient, publicly subsidized transit aren’t that great.

The bleak outlook is true for the state-at-large, as well. Bill Wright, a member of the Coalition for the Advancement of Regional Transportation, contends Kentucky’s existing public transit system is, well, nothing to be proud of, particularly when it comes to traveling the commonwealth’s rural highways and byways.

“In my opinion, it’s a broken system because (federal transportation money is) not spent well, and it’s not spent adequately,” Wright says. “And it’s a shame, because we don’t even have any pubic transportation running to Frankfort so people might have a say in the matter.”

Specifically, Wright criticizes the way Frankfort apportions Kentucky’s $1.8 million in Federal Transit Administration rural transit funds, 15 percent of which is supposed to subsidize the cost of intercity bus transit that he and other members of CART contend is woefully misspent. According to CART’s website, the group believes the FTA money should be used to manage a statewide East-West route and to absorb the high overhead costs associated with rural transportation so as to lower the cost for the average citizen.

“(Some of the funding) is supposed to be used to provide affordable public transportation between cities, but it really doesn’t,” Wright continues. “Let me give you this for-instance: Tomorrow, I’m taking a bus from here to London (Ky.) on Greyhound. I’m going to pay $45 for that ticket. Now, if I didn’t have someone to pick me up in London at the Greyhound station, and I wanted to get (the local transit provider) to take me from London to Hazard, that’s 60 miles, I would have to pay almost $60.”

In fact, Wright would pay $48 — or 80 cents per mile — to the Leslie Knott Letcher Perry Community Action Council, which serves the transportation needs of the London area. Wright contends the transit providers’ fares, many of which hover around $1 per mile, are the result of how Frankfort misspends the FTA funds.

In Kentucky’s case, any slice of unspent FTA money — specifically the 15 percent originally allocated for intercity bus transit — is reabsorbed back into the pie and spent elsewhere.

So who usually winds up eating the pie? Kentucky’s two dozen rural transit providers, who offer high-cost, on-demand shuttle service in most of Kentucky’s 120 counties, and who — in conjunction with other agencies — largely serve elderly and disabled citizens who have their shuttle services subsidized by Medicaid.

And it doesn’t help that many of Kentucky’s two dozen rural transit providers wind up in pissing matches over territory, which they’ve carved up for themselves in the absence of any federal mandate on how a statewide public bus transit system is supposed to work.

“A lot of times, when you probably hear there isn’t a cohesiveness (in the network), it’s because … those counties, especially a lot of your provider operators, are territorial when it comes to anybody coming in and taking away their business,” says Beecher Hudson, president of the Kentucky Public Transportation Association, a nonprofit advocacy group, and director of the Louisville Red Cross Wheels shuttle service.

Hudson describes a kind of Byzantine process whereby transit providers must seek authority from the Kentucky Transportation Cabinet as well as the county governments, who may or may not be beholden to established transit providers within their respective counties. He also admits that for-profit transit companies, who will do whatever they can to keep competition out of their own private fiefdoms, often undermine an encroaching transit provider’s authority-seeking process.

“In fairness to the private operators,” Hudson continues, “they don’t get the government subsidies that we do. That’s why you see a disparity in the price. Private operators have to recoup all of their expenses, and that’s why you’ll see some places look exorbitantly high, and then you compare that to a nonprofit agency because they’re hardly charging anything, because they’re getting reimbursed by the federal and state government. There’s a disparity in the prices all over the state, because you do have competition among the private operators.”

Although Hudson says there are special grant programs that make certain intercity transit options cheaper — notably the Job Access and Reverse Commute Program, which underwrites the transportation costs for low-income urban and non-urban workers — Kentuckians wind up paying more for less than their Hoosier counterparts.

That’s because, instead of a no-holds-barred cage match wherein the differing providers often work against (or without) one another, Indiana has designated Miller Transportation as the sole recipient of federal intercity bus transit funds. As a result, Indiana residents enjoy 10 regularly scheduled statewide routes and significantly reduced fares.

For a 70-mile trip — roughly the distance between Lexington and Louisville — riders in Indiana only have to pay 29 cents per mile.

While Addy realizes the public should be wary of a private company administering Indiana’s $1.9 million in federal rural transit funds, he argues the same benefits are tangible and could be achieved in Kentucky by consolidating the different providers under a public entity.

“On the federal level, it’s highly inefficient because each state does it differently,” Addy says. “There’s no mandate that tells a state how to spend its money. On the state level, the transportation cabinet works with the FTA on a number of deals, and if the FTA isn’t saying anything to them, and even though it may not be the best system you’ve got, if they’re not receiving anything from the FTA to the contrary, then it is a good system in their mind. Why would they change anything if nothing appears to be the matter?”