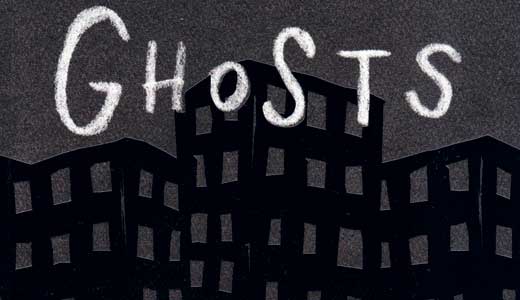 If you haven’t been paying attention, you might think poetry was limited to what you learned in school. Who could blame you for thinking that? It’s not like television talk shows devote airtime to modern poets — unless you’ve tuned in to Bill Moyers on PBS, in which case you might think all living poets are old.

No wonder a poet like Matthew Zapruder, of the infamous Generation X, could slip under so many noses. But if you look in the right places, he’s quite visible: essays for the Poetry Foundation and the L.A. Times, reams of awards, and a big fuss over his long poem, “Come On All You Ghosts,” which appeared in the Paris Review, one of the more respected literary journals.

This is all just to say that Zapruder’s “Come On All You Ghosts,” his third book of poems, comes during an age in American poetry that could arguably be called a renaissance. There are lots of young poets out there, ranging from their 20s to Zapruder’s just-over-40, but it’s Zapruder who has risen to prominence. For one, he’s certainly hip to contemporary life, and he speaks to modern readers in a language comprehensible to our particular experience: images of Jell-O, Neko Case, White Castle hamburgers and Schwinn bicycles prove common.

But he is also traditional, speaking to us through “the ancient transmission device” of poetry. His poems are little “machines made of words” that contemplate love, death, loss, the importance of memory. In short, all the great themes of literature you learned in school, barely understood, now souped-up and outfitted for today.

There are a lot of ways to write a poem, but for Zapruder, the poem is a dramatic monologue, a rendering of his thinking as he sits at his desk in the night. They are “field experiments into our private thoughts,” infused with a deep tone of melancholy, which is not to say unleavened with a sense of humor.

Take, for example, “Lamp Day,” which begins: “All day I’ve felt today is a holiday / but the calendar is blank. / Maybe it’s Lamp Day.” Then he begins a meditation on the small lamp he’s carried around for years, and the poem leaps into an exploration of memory: “On Lamp Day we try / not dreamily but systematically / to remember it all. I do it / by thinking about the hidden / reasons I love something / small.”

Then he remembers all the cities he has lived in, his memory opening like a door so that, like the lamp, he is “plugged in” to something larger than himself.

In “Paper Toys of the World,” a book by the same name initiates a meditation on beauty, of what people create in the spans of “time no one was in crisis, time no one was dying.” Or the title poem, 14 pages of meditation on, among other things, the death of his father, the ghosts of his past, and his place in the world, in which poetry is offered as a way to deal with it all, for him and us: “I have done my best to leave / behind this machine / anyone with a mind / who cares can enter.”

Though the melancholic, sighing tone can be a bit much, this is an authentic and searching voice — at once intimate and honest — that invites us in, too: “I choose to believe and choose to ask you / to believe it too.”

The honor we can afford poetry is to follow him into this world he opens for us.