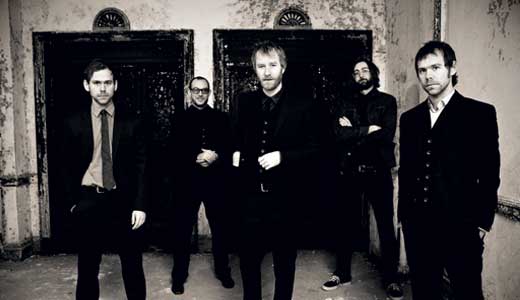 Touring on the strength of their newest and most optimistic record, High Violet, The National arrives at the Brown Theatre on Monday, with Owen Pallett opening. Drummer Bryan Devendorf goes under the knife.

LEO: Live, how faithful are you to what’s on the record? Do you stick to it or abandon the arrangements?
Bryan Devendorf: A little bit of both. Typically the forms (of the songs) will be about the same. There’s a lot on the record that we don’t have enough personnel to pull off, but we make a pretty faithful representation. Live it’s more distilled.

LEO: Coming from Ohio, does the band retain any Midwestern musical traits, even down to the parts you play?
BD: Good question. I don’t know. I know there are bands from the area that we emulate, or at least are really into. (Singer) Matt (Berninger) and I are into Guided by Voices. The way he writes is somehow informed by (GBV singer) Bob Pollard; and my drum teacher was the first drummer for the Afghan Whigs.

LEO: Any musical history in your family?
BD: My mother played clarinet when she was in high school. She put me and my brother through the Suzuki violin method when we were very young. A couple of championship ballroom dancers are on my mom’s side.

LEO: Given that the band has lived in Brooklyn since 1999, do you all consider yourselves a New York band now?
BD: I’ve actually been told that we sound British or European sometimes. Personally, I feel like we’ve been living here for a long time. I don’t really think about it. In some ways, coming up in 1999-2000, when we first started playing together, I think at that point there were the Strokes and Yeah Yeah Yeahs that I guess started or rode a wave that broke a few years later. I don’t know what New York bands sound like anymore.

LEO: What were the goals on High Violet?
BD: I know specifically Matt had wanted there to be no finger-picking on the guitar parts, but on previous records like Alligator, every song had it. It’s been over two years now since we started recording (High Violet), but I think we set out to make something that was a little brighter, sunnier — not accessible, but poppier, for lack of a better word. Matt wanted to make an effort to not be so dark, but be darkly funny.

Cross the River
The inaugural River Crossing Festival features Dangerbird, Lucky Pineapple and Johnny Berry & the Outliers on Friday, Sept. 24, at Jeffersonville’s RiverStage. Showtime is 7 p.m. Cost $5. The next day, at the same spot, put on your nostalgia glasses for K.C. & the Sunshine Band. Tickets and info at www.rivercrossingfestival.com.