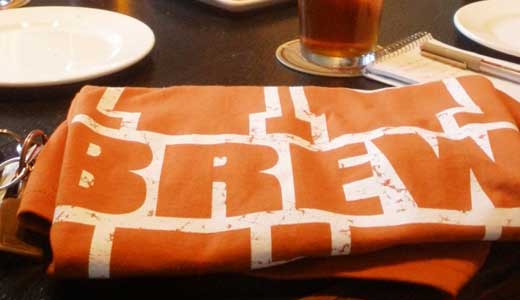 Believe it or not, I was that kid in school. I loved learning, writing on a chalkboard, trading Twinkies for Tater Tots, and showing Mom my report card (usually followed by a reward trip to Ponderosa). I always got high marks and played well with others, unless they took my Ewok away. College was the same way — I studied hard and played hard, and if you took my Zima away, I’d spank you with a ruler, or bong … whichever was closer.

So when I saw that Browning’s was conducting a Brew University, I knew I had to enroll. The first class — “BEER 101: What is beer?” — was held last Wednesday, and the series continues on the third Wednesday of the month. You can join anytime, and the fee is $25, which includes tastings throughout the two hours, appetizers, a T-shirt and in-depth beer knowledge from brewmaster Brian Reymiller.

Being the diligent student I am, I came prepared with pen and pad, and even showed up early for some extra credit in the form of Helles Lager. (Mom would be proud.) Although the discussion of beer’s beginnings was a little advanced for me, I did manage to scribble a few key words that might mean something to beer snobs: endosperm, germinate barley, crystal malt, hops = rabbit food, yeast bank.

Needless to say, this was no easy elective. If you’re serious about beer and want to know more than Wikipedia offers, get yourself to the next class. It’ll be held Oct. 20 and is titled: “BEER 102: How did beer come to be?” To sign up or for more info, go to www.browningsbrewery.com or call 515-0174.

Sometimes — OK, well, most of the time — this job doesn’t suck. Case in point: I was invited to attend The Great Kentucky Bourbon Tasting & Gala a few weeks ago in Bardstown, Ky. … wait for it … wait for it … by limo! The nice folks who put on the Urban Bourbon Trail here in Louisville just so happened to have an empty seat or two for me and my girlfriend to tag along. Of course I told my lady that it was all my doing and that I’m awesome. She pushed me out of the way and began to ransack her closet, searching for the perfect dress. “Dress?” I uttered in horror. “Yes!” she said. “It’s a black-tie affair … you’re wearing a dress … and heels!” Heels and free bourbon, I learned, do not mix.

The limo ride was amazing … and fast. We zipped along the back roads to Bardstown and actually got there an hour before the thing opened. No worries, though, because we had enough reserve in the car — in the form of Seelbach Cocktails (bourbon, champagne, bitters and something else magical) … or Woodford on the rocks if you weren’t into the bubbly. (Like I said, these Urban Bourbon ladies were pros.)

When we finally stepped foot inside the Gala, my jaw dropped on my date’s dress. Everywhere we looked, there was free bourbon and bourbon glassware. I wanted to call my mom and say, “See!? We can get into heaven! I’m here now, and I don’t see a lick of fire or brimstone anywhere.” They gave us cloth bags to fill up with the free glasses, so my girlfriend and I hurried around to each station like Red Bull-crazed 4-year-olds trick-or-treating in the Hollywood Hills. Most of the distilleries were represented — Maker’s, Woodford, Wild Turkey, Jim Beam, 1792 and Blanton’s to name a few — as were the master distillers.

The night ended with dinner, more drinking, dancing and a vague recollection of a limo ride home. But in the morning, it was Christmas all over again as we opened our goodie bags full of glassware. Now, where do I put this crap?

•4 a second, I thght my phone was a breathalyzer

•If u r reading this txt, im drunk

•Its not a party until i cant feel my teeth

•I would send you a drunk text, but I think I drank my phone

•dude im sufferin from TMI, Too Much Inebriation

•is it crabs or bedbugs?