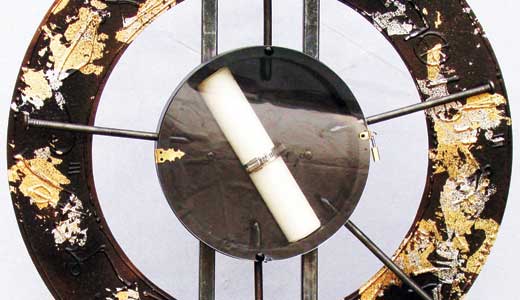 There is something to be said for artists who set up labyrinths for the mind to wander in, and then have the compassion to come along after a while and show you the exits. Gena Neumann’s new exhibit at Gallery Janjobe in the Mellwood Arts Center promises to do just that. Titled “Symbols,” the show features eight works inspired by the artist’s recent fascination with codes and encryption. Each sculpture, ranging in size from a breadbox to a French door, features an encoded message, the cipher for which she plans to reveal to the purchaser after a full year has elapsed.

It was Dan Brown’s book, “The Lost Symbol,” that served as a catalyst for Neumann’s interest in the encoded meanings and ancient symbols she used in this series. After spending two months researching symbolic language, ranging from the ancient to the digital, Neumann embarked on the creation of the works this summer, innovating on her longstanding techniques of sculptural fabrication by adding new materials to her traditionally found objects. “I was just so fascinated by the idea of codes in everything,” she says. “The more you peel back the layers, the more you understand.”

As for the messages she encoded into each piece, beyond saying they were in part inspired by her religious faith, she is understandably reticent to divulge their meanings — although she says the title of each piece offers a clue.

In “The Shield,” Neumann uses Plexiglas, upon which she “painted in reverse” with auto paint, blowtorches, even dirt to achieve the organic effusion of color, which flows across the surface of the piece. In “Monolith in Black,” the largest piece in the show, she combines hand-etched tiles and burnished metals, which reveal the bulk of their symbolic import on the structure’s more subtle anterior side. “Looking head-on is not always the best way to see something,” Neumann says. “Sometimes we need to step around, look back, and take our time to link ideas together to reveal the bigger picture.”

Her inspiration for “The Wheel” (which contains a locked scroll at its center) came to her in a dream. “I woke up in the middle of the night to start working on it,” she says. It’s not difficult to see how dreams, revelations and obfuscations translate onto the richly patterned surfaces of these pieces. The symbols and shapes of vague familiarity attract the viewer to their veiled meanings.

In a Sept. 15, 2009, book review of “The Lost Symbol,” Newsweek magazine wrote, “Brown is a maze maker who builds a puzzle and then walks you through it.” Neumann’s work may garner the same assessment — although don’t count on her to rescue you before next summer. As she delights in solving puzzles, so does she revel in setting them up for others to relish in solving.