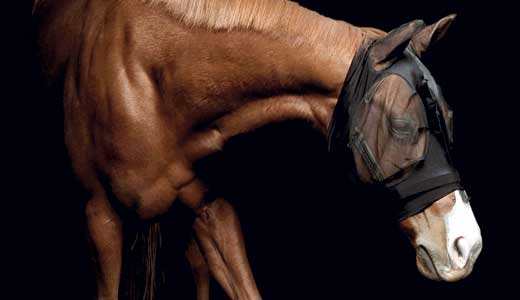 Horses are ubiquitous around here. You can’t avoid them — even if you live downtown, you might see one trotting past, pulling a carriage or carrying a police officer. And if you still manage to miss the real ones, you’re likely to spot horse statues, paintings or photos — like the ones in Elena Dorfman’s “Pleasure Park” series, which were on view at 21c this spring. Her horse photos are unusual, though — shot against a completely black background, and in positions that show the animals’ vulnerability rather than the power and athleticism displayed on the track. Ten of the images are on loan to the Ann Tower Gallery in Lexington and will be displayed during the Alltech FEI World Equestrian Games.

LEO: What kind of response did this exhibit get at 21c?
Elena Dorfman: I can only say from the number of phone calls I got from complete strangers — I’ve never had a better response. The images were there for a year, so there was ample time for people to see it, but I was blown away by all the positive responses.

LEO: You mention in your artist’s statement that you’re interested in the under-examined subject. Can you elaborate on how that pertains to this series?
ED: The horse is the least under-examined animal in history. My challenge was to take something completely iconic and make it different. It certainly wouldn’t have interested me to take a picture of a horse in a field. The original commission was to make a film, which did show at 21c, and also a study of jockeys in a way I had been shooting previously, which is on black, and to study the physique and figure of the jockey. And so the horse portraits came by accident while I was set up at a private barn shooting a jockey. There was a horse in the field, and I asked if we could bring the horse in, and the horse had the fly mask on. That’s how that was actually born. It was never predetermined in the commission that I would do horse portraits. They were, for me, the outcome of exploring the horse world, the racing world. It was only interesting to me if I could bring the horse in, out of its context.

LEO: Where did you grow up?
ED: I was living in Northern California, in San Francisco, where I had been for 20 years. I’m now based in Los Angeles. It’s a very easy place to work. I started in Bay Meadows, which subsequently closed down. It was the oldest racetrack in the country. It was very connected to Eadweard Muybridge (famous for photographing horses in motion). The motion studies were what started me on this project. I wanted to do something that explored early film and photography, particularly around Eadweard Muybridge and the motion studies. He happened to have done a lot of work very close to Bay Meadows. It was connected, and it also was coincidentally the last year Bay Meadows existed. It was meaningful for me. They let me shoot on the track for the film — it was a constant process for many months. I found a woman at Victory Rose, a breeding farm north of San Francisco, who let me do most of the horse portraits there.

LEO: What was your biggest challenge with this series?
ED: Working with the jockeys. I’m used to working with people — working with animals was very new to me — but because it was such an incredibly foreign environment for jockeys to walk into this black room and have somebody keep a camera on them, and they have to stand still, and they’re used to being in constant motion. It was uncomfortable, but in fact, I welcome that discomfort. I think that’s when interesting things are done.

LEO: Have you ever been to the Kentucky Derby?
ED: I have, just once.

LEO: What do you think of when you think of Kentucky, besides horses?
ED: My relationship with Kentucky now has changed, because I have many friends there, and I see Kentucky as a real dichotomy, a study in contrast. It’s a relatively conservative environment, but it’s also one where I personally have been able to flourish and make wonderful connections. I’m a fan of Kentucky. I know the horses carry a totally different weight, but because I’m an outsider … I have preconceived ideas about Kentucky, but I don’t necessarily see it as one way or another, because it’s been very open to me. It’s been a welcoming place. Whether or not the horses are viewed in a different way there, I don’t know. I only know the response I got, which was very positive.

LEO: This exhibit at Ann Tower is part of the Alltech FEI World Equestrian Games.
ED: I thought it would be interesting to actually present the images to a more international audience of horse people, and I have no idea what the response will be. I just hope people look at them with an open mind, past the “pretty picture” of a horse, and see another kind of pretty picture of a horse.