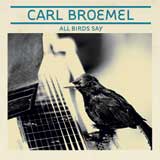 As one-half of the guitar attack in My Morning Jacket (by now, you know the other half), Carl Broemel deploys furious riffs, sentimental pedal steel and lush, unnerving saxophone (See: Z closer “Dondante”). All Birds Say is his solo departure from that business. Here, he unwinds and kicks his feet up, late summer lawn chair-style, to spin yarns and unspool easy balladry. First-person everyman observations come at a slow drip, aptly fitting the New Orleans sway of “Different People” and the harmonious luxury-waltz of “Sunday Drivers.” Calming and sincere, Broemel’s mood is one of contentment. He passes on advice about the difference between needs and wants in “Enough” — What’s the point in trying to save any money, when you will only waste it on yourself? — with occasional darts thrown at those who traffic in suspicion (“Questions”). A reputable revue.