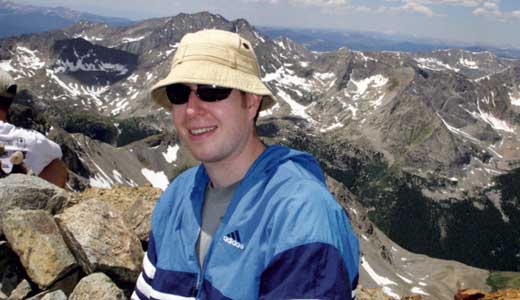 Eric Rogers, 32, leans his thin, ghostly frame over the right side of his parents’ recliner, retches a poor excuse for a diet into a garbage can and continues talking, fully aware of his manners but hoping you don’t care. His stomach does not work, so a plastic tube pumps in Osmolite, a 2,200-calorie liquid mixture of coconut water, potassium and protein that is his sole source of nutrition.

Rogers has good news today: Soon he’ll begin receiving disability payments, so he and his wife, Samantha, 29, won’t have to worry as much about money when they move into their new apartment off Shelbyville Road. Until then, he is staying with his folks and watching TV. Showtime’s serial killer-as-family-man drama “Dexter” is their favorite, with vampire cult hit “True Blood” a close second. A fresh tattoo takes up his right calf: a Cocopelli, the dancing figure known to Native Americans in New Mexico as a trickster, or “joy bringer.”

For two years now, life has played a series of cruel tricks on the avid outdoorsman, hiker and accomplished skateboarding athlete.

In 2008, on the day before his 30th birthday and four days before his wedding, Rogers was diagnosed with esophageal cancer. Treatments and surgeries have not stopped the disease, which has returned with a vengeance and metastasized to other parts of his body. The 15 doctors and specialists can’t explain why it struck him at such a young age.

Wheels up
That he is basically homebound speaks to the toll cancer has taken on Rogers’ quality of life.

In the early 1990s, while attending Waggener and Atherton high schools, he was known around Louisville as a highly skilled skateboarder. Rogers was one of about four teenagers who earned partial sponsorships from the now-defunct Hardcore Skate Shop in St. Matthews. The group hung out there often, and the owners decided they were good enough to supply them with free or discounted skateboards and other gear, even building a half-pipe inside the shop.

“We would try to push the envelope with skateboarding,” Rogers says. “We were definitely sponsor-worthy. We were all of that caliber.”

“Hardcore took us in. We were all kids. All we did was skate all day and had no place to go,” says Seth Robinson, 31, another Hardcore regular who was sponsored by the shop. “It was a good thing, because we were breaking three or four boards a week. Some of us were out of commission for three months here and there, because we kept tweaking our ankles.”

Robinson recalled Rogers attempting to vault over a set of stairs and landed with his skateboard the wrong way. “He took one of the nastiest spills I’ve ever seen.” Rogers was back skating in no time. “Eric never gave up on anything.”

His goal was to skate in as many skate parks in the country, and he dropped in to 70 of them, from the concrete Extreme Park downtown (“the fracture factory,” Rogers calls it) to Eye Level Park in Elizabethton, Tenn. (a “skaters paradise”) to the empty pools, or “bowls,” of Petaluma, Calif., where he successfully performed a 360-degree kick-flip over a standing garbage can.

A kick-flip is one of the basic tricks any pro or semi-pro skateboarder must know, but Rogers’ move meant he had to suspend himself in mid-air while the board spun both vertically and horizontally underneath. It’s difficult enough to perform on the street unobstructed, let alone over an object.

“He had the best ollie kick-flips I’ve ever seen in my life,” says Robinson, who traveled with Rogers at the time. “His style was kind of like his personality: just very laid back. Every time he popped a trick and rode away, he had this slouch and lean.”

Rogers graduated from University of Louisville in 2002 with a bachelor’s degree in psychology and a minor in communications. He was over 21, his interest in skateboarding was waning, and he left his job at United Parcel Service to work as an office manager at an Embassy Suites hotel in Denver. He had spent a lot of time in hotels as a kid on family trips and liked the idea of working with people. The Rocky Mountains and accompanying outdoor life only sweetened the deal.

Higher
“In Louisville, visually, you’re in a forest,” Rogers says. “Denver is all about space.”

Colorado has 64 mountains that reach above 14,000 feet, but 637 peaks above 13,000 feet. Rogers has hiked 20 of those. To explore that elevation is to balance concentration and fear — of being lost, running out of water or being struck by lightning.

“When you’re hiking by yourself, you’re hiking with God, and there’s a certain spirituality there,” he says. “The more you hike, the more you realize how complicated it really is: how long you can last, oxygen deprivation, navigation.”

Rogers tested those theories, pushing his body to the limits of exhaustion on a 65-mile trek down the Colorado River by bicycle and kayak, and traversing the frozen waterfalls of Ouray, Colo., one of the world’s most popular locations for ice-climbing.

In Moab, Utah, he ran out of water and, after spending a day on foot, had no choice but to drink his own urine. He matter of factly says humans can imbibe as many as three times before it harms the body, as if we were talking about Gatorade instead of excrement.

‘It’s cancer’
“We probably had the least exciting courtship ever,” says Samantha Rogers, a self-described “smart ass” who wears most, if not all, her emotions on her sleeve. Late-night phone calls, marathon conversations until 3 a.m., and a trip to Wal-Mart or two sums up their pre-marital relationship. When Rogers moved to Denver, they kept the long-distance going. Samantha admits she wasn’t sure then whether Rogers was in for the long haul, but she felt chemistry, decided to take a risk and followed him to Colorado.

“If it fails, it fails, and we’ll do something else,” she says, smiling. “Besides, nobody appreciated my cheeks like Eric does.”

Professionally, Rogers’ was moving up in Embassy’s operations, promoting him to a new job that would involve more work on the sales side, and Samantha remembers him being particularly excited about an upcoming conference. They were moving into a new house, and Rogers had bought a ring a month before he proposed to her.

Three weeks before their wedding, Rogers complained of being continuously tired and hungry, but he couldn’t keep anything down. A general practitioner initially concluded he was suffering from acid reflux but referred him to a gastroenterologist, who performed a biopsy on the black spot found at base of his esophagus, near his stomach. Ten days later, an oncologist confirmed their worst fears. Four days later, Samantha and Rogers married.

By the throat
Esophageal cancer is less common in the United States than it is in other parts of the world. Medical research indicates that the disease, which attacks the throat and stomach, is caused in part by poor diet, such as a lack of fruits and vegetables, and excessive smoking and drinking alcohol.

Symptoms range from a persistent cough to indigestion to difficulty swallowing. The National Cancer Institute estimates that 16,600 cases of the disease have been diagnosed this year. Of those, 14,500 were fatal. A March 2009 ABC News report links a surge in diagnosis to the nation’s growing problem with acid reflux. A test called transnasal esophagoscopy can expose irregularities in the esophagus, and if the cancer is present, doctors can see it.

Rogers has searched in vain for an explanation from his doctors as to why the disease hit him so early. Their only recourse has been chemotherapy and surgery. Doctors went in through his back and removed 25 percent of his stomach and half of his esophagus. Tubes were used to reinflate his lung. He lifted his shirt to show a pink scar running around his right side where they removed a rib.

For a full a year, Rogers was cancer free. He and Samantha celebrated their honeymoon in Waikiki. They took a submarine trip 100 feet down into the Pacific Ocean to explore manmade reefs, went snorkeling and Rogers went tandem skydiving from 14,000 feet.

Compared with what he would learn the following year, jumping from a plane seemed frivolous.

Following his first surgery, Rogers underwent chemotherapy to kill the microdisease, or leftover cancerous cells. It failed to wipe out all of it, and the cancer returned, this time spreading to his right lung, below his liver and upper abdomen. “It’s considered not even curable,” Rogers says, and he only goes through chemotherapy to manage the disease.

Now a Zen Buddhist, he says he isn’t angry. “You can’t blame your doctors.”

The couple, whose families live here, left Colorado and, earlier this summer, moved to a St. Matthews apartment with their 8-year-old Shih Tzu Emily. The weekend Rogers was first diagnosed, Emily did not leave his side, and Samantha says she knows he is sick. “She can smell the toxins.”

At this stage of Rogers’ disease, doctors are considering using Herceptin, which the FDA has approved to treat breast cancer that has metastasized but is not marketed or approved for esophageal cancer. Canadian drugs are also under consideration.

Future, tense
Rogers is finding a way to stay positive despite the frustration of his diagnosis. On his Facebook page, he writes: “Cancer has taken 2 of my aunts and my grandmother. Cancer has challenged my mom, and she beat it both times … Cancer has taken so much time away from me when I could have been spending more time living. Cancer stalled me from taking my honeymoon, but I still made it to Hawaii. Cancer is now stalling me from going to India & Nepal. FUCK CANCER! I have beat it once, and I will beat it again. I will continue to live my life!”

One key way that the disease has affected their lives is how they react to everyday situations, and the way that friends react to them. “Every day, every minute, every hour is different,” Samantha says. “He and I are experiencing something that most people don’t experience, so when I tell him I love him, I really mean it.”

“Everybody’s scared,” she continues. “Anyone who’s ever met us and knows our situation, it changes you.”

In the months since Rogers’ cancer has returned, the couple’s obstacles have ranged from frightful to comedic: Like the time Samantha laid into her horn after a cop turned without signaling. Or when she broke her foot in a 10-mile-an-hour car wreck and spent eight weeks in a cast that aggravated her allergy to Fiberglas. Or when they spent $1,000 to remove Emily’s bladder stones. Or the doctors appointments that end with “no news,” “not so bad news” or “really bad news.” Or when her husband vomits what looks like coffee grounds.

In a life where downtime doesn’t exist, where every minute could be the last minute, Samantha says the couple manages to find a way to relax. “It’s complicated for him to go out. It can’t be too warm,” she says. “So we just sit around, not talking, holding hands. We pet the dog. It’s just … simple.”