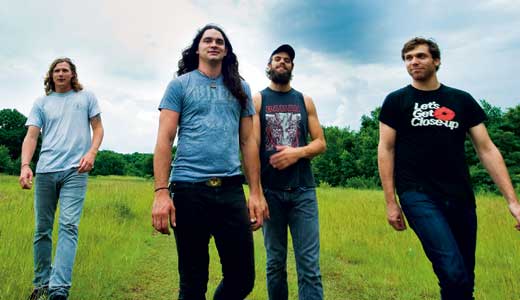 John Dyer Baizley is the voice and chief artist behind Baroness, who are opening for Deftones at Expo Five on Tuesday. He’s also a painter and visual artist whose work can be seen on albums by Kylesa, Black Tusk and Flight of the Conchords, as well as in Guitar World magazine. Baroness’ sonic treachery can be found on their last two critically acclaimed sister albums, Red Album and Blue Record. We prodded him for details on the band’s new material.

LEO: Your thoughts on the passing of Ronnie James Dio.
John Dyer Baizley: I didn’t personally know Dio, other than the fact that everybody I know who had met Dio said he was super positive, super cool and a super affable type of character. We don’t have too many of those in the music industry. A big voice. He will be missed.

LEO: How far along is the band on its next album?
JB: We’ve sort of loosely started at this point. There’s hours and hours worth of ideas. We’re gonna get down to business in January once all our touring stops. The overall mindset is to challenge ourselves. The whole point is not to get into some pattern. It’s to figure out, musically, where we are weak and make that stronger.

LEO: You’re opening for Deftones now and for Metallica in Australia later this year — two bands in different parts of the heavy music spectrum. What does this say about Baroness?
JB: It’s a direct result of our openness and willingness and desire to play on a comprehensive range of tours. It would be pretty boring for us, actually, to stay within the comfort zone all the time and play with whatever bands would be obvious choices for us.

LEO: The South has its own ethic for heavy music. Is that geographic? Socioeconomic?
JB: It’s sort of the sum of its parts. I can only really speak for the town we come from: We were geographically isolated from the “major market” scene of music. It had an effect on me and the rest of the band. We could for years be entirely self-reliant. Things have grown beyond that. It all boils down to the fact we were given nothing, so we made what we wanted ourselves, with our own hand. There’s always a level of gratitude.