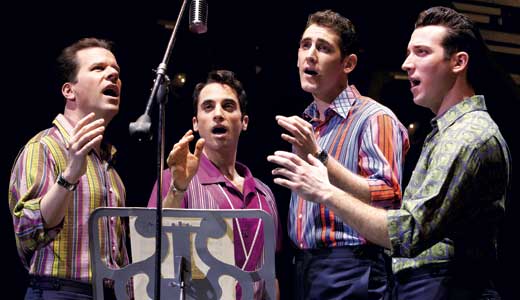 Jersey Boys
Presented by PNC Broadway Across America. Continues through Aug. 15 in the at the Kentucky Center’s Whitney Hall, 501 W. Main St. For tickets, call 584-7777 or visit www.kentuckycenter.org.)

When a rock group comes along that reaches such iconic status as the Four Seasons, there seems to be some sense that destiny was involved — with a voice like Frankie Valli’s and the songs of Bob Gaudio, how could they not become stars?

The production of “Jersey Boys” tells the story of how the Four Seasons came together and how they broke up, the fights, the friendships and, finally their induction into the Rock and Roll Hall of Fame. We get to learn how Nick Massi (Steve Gouveia) and Tommy DeVito (Matt Bailey) had a group, how DeVito discovered Valli (Joseph Leo Bwarie) and his amazing voice, how Gaudio (Buck Hujabre, understudy performed) came in and wrote some of the most memorable hits still played today. It’s the story of legend. It’s the story of a wild chance for these wild Jersey boys to find fame and fortune and go down in rock ’n’ roll history.

The production shines. The music sweeps through, and the story is intriguing and exciting. It’s broken up into four parts — each of the four tell their version of a certain time. The first act, told from the point of view of DeVito and then Gaudio, is nostalgic for a different time and optimistic for their possibilities. The second act, beginning with Massi’s point of view, lags just a bit after the roller coaster of the first act. It might be that the second act shows more of the reality of their lives — the deaths and heartaches they survived after fame took over their lives.

But more than anything, music drives the show. And because the music is so familiar, there’s great anticipation as to what the next song will be. In the first act, Gaudio tells of walking out of his house to go to their first recording gig, and a song just hits him — comes to him out of the blue. He writes it down immediately, they record it that day, and soon enough we find out that the song is their first hit, “Sherry.” The musical plays with this anticipation throughout, but it pays off big time when the songs are finally sung.

The cast is amazing, as one would expect from a Broadway national tour. The voices and harmonies are just like the original, and one can’t help but clap along to the music, sway to the tunes or even mouth the words. It seems that when anyone sees an understudy instead of the original cast, they’re always amazed at how good they are — and this time is no different. Buck Hujabre went in for the role of Bob Gaudio and hit it out of the park.

Instead of the usual one-weekend run, “Jersey Boys” is around for a while. So here’s your chance to see (and hear) how four boys from Jersey made history.