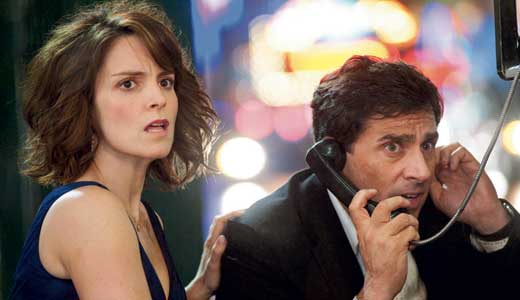 Tina Fey and Steve Carell are perfect in this no-holds-barred comic take on middle-aged marriage. With daily life getting kinda stale, they decide to go into town for a bit of — just a smidge, mind you — the high life. Tired of waiting for a table at a snooty restaurant, Steve decides to impersonate a couple of no-shows, setting in motion a comic avalanche of mistaken identities, crooks, cops, spies, strippers, crazy car chases and gratuitous cameos (Mark Wahlberg, Mark Ruffalo, Kristen Wiig, James Franco, Mila Kunis, Ray Liotta and more). Has a nice made-up-as-we-go vibe … just like real life!

This movie was simply too good for theaters. David Duchovny and Demi Moore are perfect as the seemingly normal, average, attractive and affluent new neighbors on a suburban cul-de-sac. But in reality, they are living advertisements, sales agents on a mission to encourage their neighbors to buy expensive cars, boats, vacations, home additions and thousands of sundry upscale products guaranteed to satisfy all of man’s desires. Not perfect (it veers in an odd direction about halfway through), but worth checking out.

DEATH AT A FUNERAL

Benjamin Bratt stars as Che Rivera, conquering San Fran’s brutal Mission District by building low-riders after leaving prison. His one joy in life is his son, whom he raises alone after the death of his wife. But after all this, how can he carry on when his son announces he is gay?

Man, are we juiced! This first-ever cyberpunk series started out incredibly strong (a “smart” laser-armed “Star Wars” satellite named for Ronald Reagan gets bored and decides to incinerate a town, just for grins) but fell victim to increasing pressure from network execs to dumb it down. Matt Frewer plays both the intrepid video newsman Edison Carter, whose “live and direct” worldwide broadcasts make him the target of ruthless corporations, and his living computer-generated alter-ego “Max Headroom.” Together with Amanda Pays and Jeffrey Tambor, they expose evil in a near-future world where TVs have no “off” button and a Chinese fast-food conglomerate controls everyone’s lives. Long overdue.

MY NAME IS KHAN

If all you know of Bollywood is the colorful dance numbers, you are in for a surprise. Here, Indian superstars Shah Rukh Khan and Kajol take their tale of star-crossed love and Asperger’s syndrome to San Francisco, where the events of Sept. 11 put them in peril, leading to a cross-country trek to seek help from President Obama. An odd and uplifting romantic drama with a side of curry.

This may be hard to find, but we loved it. Three guys tell a fourth all the stupid things they’ve ever done in the pursuit of love — almost always ending badly (and hilariously). A terrific cast and great writing make this a winner. Stars Aaron Paul (“Breaking Bad”), with Carly Pope, Shannon Lucio, Smith Cho, Rob Benedict, David Monahan and Christopher Gessner.

First Blu-Ray releases of one of our favorite Jet Li flicks. Here he plays an orphan who, with a friend, was raised by Shaolin monks. As adults, they part, with Li joining the ranks of rebels fighting for independence against his friend, who joins the military. The friend, hungry for power, betrays Li, leading to one of the greatest, most poetic and beautiful martial arts battles in any film. Highly recommended.

Two of the greatest docs of modern times are “Who Killed the Electric Car?” and “I.O.U.S.A.” If you haven’t seen them, make it a priority. Then check out this savage doc from the same team as they go behind the boardroom doors to reveal the unregulated, runaway industry that aims to privatize and control the lifeblood of our world: drinking water.

The guys who brought you Robot Chicken return with more action-figure foolishness, this time taking on the “giant robot composed of several giant robots” genre. A century from now, the solar system is protected by a crack team of space pilots. Or would be, if they weren’t completely incompetent.

Colin Farrell, Jamie Sives, Christopher Lee, Kelly Reilly and Paz Vega star in this tale of a war photographer, nearly killed in Kurdistan, who returns home alone, without his faithful colleague. As he struggles to recover and remember what happened, the people around him look for answers.

Some of our favorite films have come from New Zealand, and this one’s going on the list. A pair of teenage twins who once shared a psychic bond move in with estranged relatives after the death of their mother. There they find a volcanic lake and an odorous cabin that clearly holds an alien presence. One damn good tale aimed at the tweeny set, but smart enough for adults. Recommended.

However you feel about Israel, there’s no denying that some of man’s earliest recorded history took place within its borders. This doc avoids all the modern-day nonsense by staying airborne, providing an awesome aerial tour of sacred lands, natural wonders, storied buildings and legendary sites of the Egyptians, Greeks and Romans in a way that land-locked observers simply can’t imagine. Clever and beautiful.