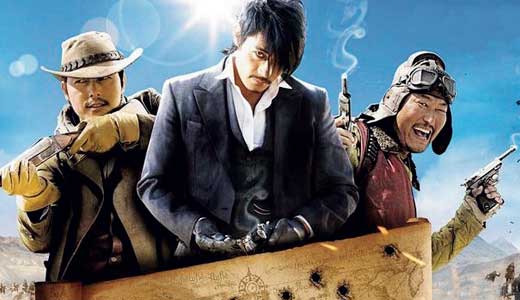 The Good, The Bad and The Weird

A labor of love from some of our WonderFest buddies. Daniel Roebuck (as “8 O’Clock Farraday”) leads a wacky cast in an all-out spoof of the 1930’s dark-house thriller — complete with moving-eyed paintings and a gorilla on the loose (who else but Bob Burns?). Mark Redfield is terrific as evil lawyer Farper Twyly, as is the rest of the cast — James Karen, Jim Beaver, Jennifer Blaire, Fay Masterson and many other familiar funny faces. An all-out hoot; you’ll laugh your ass off!

THE GOOD, THE BAD, THE WEIRD

A South Korean homage to Sergio Leone spaghetti Westerns, set in 1930s Manchuria. Huh? Yeah, but that doesn’t cover the Chinese gangsters, Japanese army and scores of other crazy-ass elements in this riotously entertaining flick. A big hit at Asian film festivals around the world and highly recommended by us, as if that mattered. Is anyone even still reading this stuff? Send us some money to prove it.

In one of the goofiest plots we ever heard of in a non-comedy film, Briana Evigan stars as a young woman, trapped in a house. With a hungry tiger. During a hurricane. With her autistic 12-year-old brother. After her mother dies. And her dad has stolen her college fund. And it co-stars Meat Loaf. Would make one hell of a musical.

If you like Sean Bean, you will love this flick! He’s on the screen every minute as Pyke Kubic, a sinister man out to settle a score for his brother who, it seems, has thrown a briefcase full of stolen money out of a plane and onto the hood of a car driven by an impoverished Chris Hemsworth and his wife, Victoria Profeta. Sean is there to get it back. They, of course, have already spent it. As over-the-top as it sounds.

The original 1978 “Casshern” was an anime masterpiece about an immortal being in a white, steel body. The 2004 live-action version set a standard for anime upgrades. In “Casshern Sins,” the Earth is now “transhuman,” with man’s mind-children clearly in control. Here Casshern kills a mysterious girl, leading to the end of the world. He must walk the desolate Earth on a journey of self-discovery and redemption. Pretty heavy stuff, but fascinating.

Ricky Gervais takes us on a serio-comic tour of his formative years in a little town. Christian Cooke longs to escape his small-town life, so he takes a job from Ralph Fiennes selling life insurance. His new life is filled with friends, co-workers and their families, including Snork (Jack Doolan), Bruce (Tom Hughes), Mike (Matthew Goode), Emily Watson and Felicity Jones. Lots of stuff happens in Gervais’ inimitable style.

OK, right up front: We just can’t watch this supposedly “adult” comedy-drama from Disney. That being said, any show in which Courteney Cox pretends to give a guy a BJ is OK in our book! Part of our dislike is the idea that Cox will always be, to us, that hot babe from “Friends” — the idea of her being a “cougar” is just gross. Anyway, she stars as a 40-something divorced woman trying to get back into the dating pool while life falls apart around her. They should sell the show to Showtime, which has enough balls to show her giving a real BJ. Now that would be sweet!

Brendan Fraser stars in this broad kid-flick comedy about a supposedly “green” housing developer who decides to drop the pretense in exchange for money, money, money! The forest animals, led by a crafty raccoon, bring him to his knees by biting him in the crotch.

A popular art-houser, promoted by Rosie O’Donnell, about a black child with white Jewish lesbian parents who goes “in search of herself.” This largely involves learning to run really fast. Inspirational in that “find the one thing you’re really good at” mold.

Eldrick Tont Woods — which sounds like something from Middle-earth — is the real moniker of arguably the greatest golfer in history. He is also, apparently, quite popular with the ladies (earning $110 million a year in endorsements tends to do that), except, of course, with his hot, blonde soon-to-be-ex-wife who’s taking him to the cleaners for dropping his balls in the wrong holes. This and many more things that are none of your business can be found in this biodoc that he’s not crazy about.

A fun and silly chick-flick comedy about a gorgeous young rushee (Lucy Hale of “Pretty Little Liars”) and the two sororities who fight over her, led by Courtney Thorne-Smith and Faith Ford.

THE CITY OF YOUR FINAL DESTINATION

Honest truth: We thought this was a spoof of the “Final Destination” franchise! Jeez. In reality, it’s a big-ol’ Anthony Hopkins vehicle about a guy named Omar who wants to write a book but needs permission from Hopkins, Laura Linney and Charlotte Gainsbourg. Linney, in particular, is simply terrific in this attractive and intelligent drama in the Merchant Ivory vein.