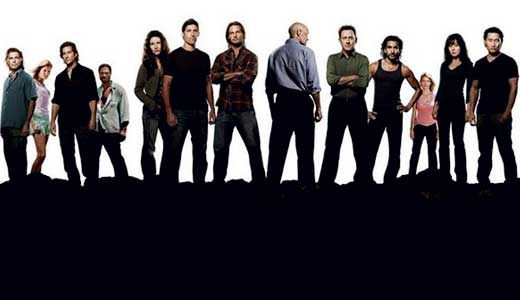 GEORGE ROMERO’S SURVIVAL OF THE DEAD

The Ultimate Undead Blu-Ray Edition of writer-director George Romero’s latest gorefest shows why George’s zombies are more entertaining than all his imitators’ zombies. Beginning shortly after “Diary of the Dead,” Alan Van Sprang leads his mercenaries to a remote Irish island where two feuding families have barricaded themselves against the Apocalypse. Of course, the Undead are really Romero’s way of exploring the stagnation of American society and advent of “comfort culture,” so everyone dies. Not his best, but severed-head-and-shoulders above most.

What was this? Suspense? Action? Horror? Mystery? Sci-fi? Moral parable or random scenes that don’t form a whole? Maybe all of the above, maybe something else altogether, but you have give J.J. Abrams credit: It was one of the most curious and talked-about series since its premiere in 2004. A jetliner crashes leaving only 48 survivors — including some of the most beautiful women ever to grace a TV screen — on a tropical isle where nothing seems to make sense. All six seasons also available separately, including the final season where all was revealed. Recommended.

This latest in the “I took someone to the hospital, but the hospital lost them” chiller genre stars the late Brittany Murphy as the dropper-offer and Dean Cain as the someone who is missing (just like his career). This really gets rolling when Peter Bogdanovich shows up as Brittany’s shrink and declares her crazier than an outhouse rat.

Except for “Ocean’s 11,” Andy Garcia has been making simple, low-key movies with lots of heart and family schmaltz of late. Case in point: Here he plays a corrections officer with Julianna Margulies as his wife. Together they have a son and daughter, each of whom is getting into trouble, trying to find their place in the world. But, unbeknownst to his family, Andy has been taking acting lessons at night and yearns to be a thespian. We’ll let the obvious joke pass.

CLASH OF THE DINOSAURS

A Discovery Channel series where they use CGI to build realistic dinos, complete with skeletons, muscles and horns, then let them computer-fight to see who would win. A bit repetitious at times, but a lot of fun.

A cache of attractive young people gathers at group therapy to discuss their problems. Of course, their problems are all centered around … wait for it … sex in this no-budget indie comedy with a terrific cast, aka “The Group.” Cameos by Greg Germann, Greg “Heroes” Grunberg (who also wrote the screenplay), Odette “The Unborn” Yustman, Henry Winkler and Tom Arnold.

Based on a true story, Cedric Sanders plays a black collegian in 1965, forced to attend an all-white seminary after the Watts riots. But the movie belongs to his mentor, Lou Gossett Jr., the dorm janitor, who helps him find the perspective that changes men into leaders.

LETTERS IN THE WIND/OUR TIMES

A pair of highbrow Iranian tales. The first looks at nameless conscripts of the Iranian military, forced into tiny barracks where their identities become lost. The second looks at the discrimination and economic hardship of modern Iran, filmed reality TV-style, which highlights the shallowness of Western attitudes toward the rest of the world.

A no-budget modern-day vampire tale with Gothic inspirations. A trio of young Americans researches the infamous blood-drinking Countess Elizabeth Bathory in the modern-day Carpathian Mountains. There they meet Christopher Lambert, who sends them on a quest to save their own lives as supernatural forces suddenly begin closing in from all sides. With some nice backstory and terrific action scenes. Tons of fun with Irena A. Hoffman as one damn-fine-looking resurrection.

The 30th Anniversary Collector’s Edition — and first Blu-Ray release — of the Lone Wolf and Cub saga. If you need to know more than that, you are not worthy.

We’ll skip all the “backside” jokes in deference to star Jennifer Lopez’s huge, tasty booty and say that, after giving up on love, she decides to have in vitro fertilization and go it alone. Of course, that’s when she meets Mr. Right, Alex O’Loughlin. As trite and predictable as that plot sounds, Jenny’s comic timing is razor-sharp, and she makes the most of it. A chick-flick to be sure, but we’ve seen worse.

A good if overlong supernatural TV thriller starring Peter Gallagher and Kristin Lehman, whose rebellious daughter (Jenna Boyd) disappears. A teacher tells them the kid may have been involved with witchcraft and black magic (ooo-weee-ooo). From the Lifetime Cable miniseries.

A full-length original animated movie from Warner Bros. in which the cartoon cat and mouse put aside their differences to join The Great Detective in solving a baffling jewel heist. With guest appearances by Droopy, Tuffy and Butch.

Trivia question: Can you name the world’s first TV situation comedy? It was 1949’s “The Goldbergs,” and this great historical doc shows us the wild life of radio star and TV pioneer Gertrude Berg. She created the show and forever changed modern entertainment, and also was famous for championing a number of social causes.