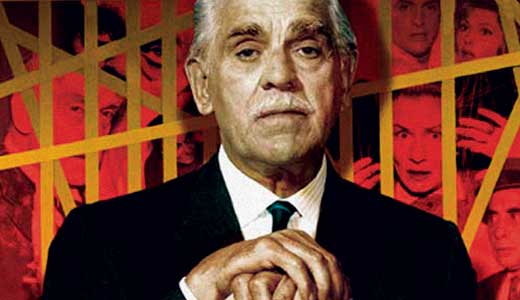 First-ever Blu-ray release of the seminal work in indie oogity-boogity. Five buds stumble across the Sumerian “Book of the Dead,” plus tape recordings of a long-vanished archaeologist, waaaay back in the piney woods. What happens next can only be described as “inspired.” This crazy gorefest launched the careers of writer/director Sam Raimi (“Spider-Man”) and star Bruce Campbell (“Bubba Ho-tep”) and spawned the decade of indie horror that we’ve come to know simply as — “the ’80s.”

Ow, wow! For the first time ever on home video: the complete, uncut series from the Golden Age of TV, hosted by Boris Karloff. If you are not familiar with this incredible 67-episode series, it was similar to “The Twilight Zone,” but with a far wider — and darker — array of stories and terrific stars. Like who? How ’bout a young William Shatner, Leslie Nielsen, Mary Tyler Moore, Elizabeth Montgomery or Rip Torn? — all in original tales from such authors as Edgar Allan Poe, Robert “Psycho” Bloch and Cornell “Rear Window” Woolrich. This is an absolute must-own for any fan of great TV, especially great spooky TV. Turn off the lights and trust us, this is gonna be … a thriller!

OK, here’s something new: a look at WWI from the eyes of … painters. It seems that the period 1914-1918 was one of the most creative periods in art history, with scores of new movements — Expressionism, Dada, Cubism, etc. — giving rise to new ways to view the world. And, as often as not, what they viewed was a world at war. Interesting.

Retired British Marine Harry Brown (Michael Caine) lives quietly and alone in a depressed part of town. But when his only friend is murdered by a street gang, he decides to clean up the neighborhood, which brings him into conflict with police investigator Emily Mortimer. A classy Limey take on Charles Bronson movies, which is chilling to say the least. Quite good.

A Detroit metal-head discovers a guitar possessed by rawk gawd Eddie Lee Stryker, who was murdered by an evil, gorgeous gangster named “Mrs. Delicious.” The guitar gives him heavy-metal superpowers, turning him into a huge, metal monster bent on exacting revenge from the bad guys. An insane mix of gore, comedy and music such as only our buds at Troma Studios could jam on.

Some of the world’s greatest guitarists gathered quietly at NYC’s Iridium Jazz Club in 2005 to honor the 90th birthday of the creator of the electric guitar, Les Paul. Many of them returned to continue the fete every Monday for four years, until Paul’s death in 2009. This doc features 23 songs from Paul and guests such as Keith Richards, Steve Miller, José Feliciano and many more. Priceless.

What can we say? One of the most successful comic strips in history, running the same joke for 57 years (“yeah, he’s a big dog”), makes it to the big screen in CGI/live-action form. It had been a TV series back in the ’80s, but the filmmakers tossed all that out and started over with the voices of Owen Wilson, George Lopez, Lee Pace, William H. Macy, Fergie, Kiefer Sutherland, Emma Stone, etc. Roughly on par with the recent “Garfield” and “Chipmunks” movies, which is not meant as an endorsement. Strictly for-the-bucks, but your rugrats won’t care.

Frankly, we’ve always thought that the whole NCIS franchise was just a lame police procedural for the elderly. It’s not possible to sit through an hour of it without thinking, “Man, this plot predates Pearl Harbor. Who can relate?” Well, creator Donald Bellisario finally made an NCIS for the rest of us and stuck it in L.A., where there’s so much crime, the police need military support. A more action-oriented cops-and-robbers-er with pretty boy Chris O’Donnell, Peter Cambor, LL Cool J and action-hottie Daniela Ruah as I. Candy.

If you missed 2006’s wonderfully ridiculous French ode to spy movies, “OSS 117: Cairo, Nest of Spies,” you really need to get on board this train. Froggy comic Jean Dujardin returns as the absurd titular super-secret agent, still stuck in 1967, but now with a sexy Israeli she-spy, played by Louise Monot. Together they seek an evil Nazi in Brazil. Great subtitled stuff.

The term “Final Girl” was coined by horror film junkies to describe the ultimate target of the psychopathic killer in a mad-slasher movie. What does that have to do with this movie? Well, we won’t spoil it. A steamy, dizzying, over-intellectual chick-mystery about three French lesbians — “Mystery Woman,” “Roommate” and “Business Woman” — seeking a fourth who has vanished. From angry director Todd Verow.

First full-season video release of TV’s lame rip-off of the lame “Twilight” movie franchise. Nina Dobrev plays the virginal hottie, lusted after by a pair of vampire brothers, Paul Wesley and Ian Somerhalder. Nothing much happens, this being American TV and all.