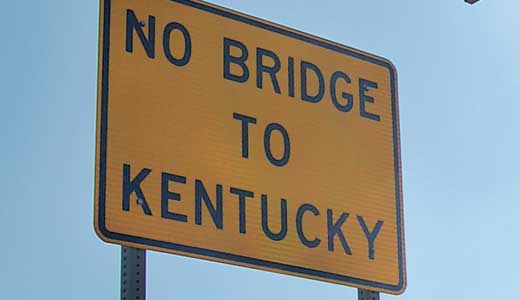 A federal judge is expected to rule soon on a motion by a regional transit group to join a pending lawsuit that remains a major obstacle to the Ohio River Bridges Project.

In its request to intervene, the Coalition for the Advancement of Regional Transportation claims the Federal Highway Administration violated the National Environmental Policy Act by “intentionally or recklessly” failing to provide a “full and fair analysis of public transit alternatives” that “would eliminate or greatly reduce the need for one or both proposed new bridges and the planned movement and drastic redesign of Spaghetti Junction.”

According to its website (www.cartky.org), the Federal Highway Administration “cooked the books.”

In response, the Highway Administration says it evaluated and explained the rejection of three mass transit alternatives ranging from an all-bus system to three light rail lines and a new bridge, which CART says wouldn’t be necessary given the existence of three railway bridges that could be used.

The suit CART seeks to join was filed last September by River Fields Inc., a local conservation group, and the National Trust for Historic Preservation.

CART may seem an unlikely ally for the plaintiffs. River Fields opposes the East End bridge yet favors the more costly and controversial downtown hemisphere of the project. By contrast, CART alleges that the expansion of the Kennedy Interchange would “seriously and adversely affect Butchertown — a healthy urban neighborhood — by noise and traffic from the closer, elevated and enlarged interstate.”

CART further claims that the $4.1 billion project would “cause irreparable injury” to its low-income, elderly and disabled members who increasingly depend on public transportation — by committing scarce, irretrievable resources to a less accessible option.

Nevertheless, CART and River Fields are united in the view expressed by Elizabeth Merritt, an attorney for the National Trust, when the lawsuit was filed: “A lot has changed in the past six years, and we think the whole package needs to be re-evaluated.”

CART argues the Federal Highway Administration’s 2003 approval of the mega-project was misguided partly by an avalanche of “grossly inaccurate” projections triggered by the “assumption that oil would remain below $25 per barrel through 2020,” its motion says. “Oil is expected to remain at $85 to $95 per barrel, according to Financial Times.”

“Increased oil prices increase ridership of public transit and reduce car and commercial truck traffic. While a reduction in vehicular traffic has not been quantified, TARC has reported significant ridership increases” but “has significantly contracted its routes,” CART claims, speculating that “job losses for persons of low economic means will likely be much greater than anticipated” as urban jobs migrate to the bridge-induced eastern sprawl.

CART and the original plaintiffs agree that the Highway Administration’s own regulations require it to issue a Supplemental Environmental Impact Statement addressing an abundance of relevant “new information or circumstances” unanticipated in previous analyses.

(No less would be required if, as expected, the Bridges Authority’s financial plan includes tolling.)

Accordingly, River Fields, the National Trust and CART are asking the court to consider setting aside the Final Environmental Impact Statement and the Record of Decision, the project’s detailed master plan, which took years to develop. In the alternative, CART requests the feds be required to reconsider mass transit as a reasonable substitute for the project.

If the case isn’t settled before the Bridges Authority develops a financial plan, the plaintiffs “will seek injunctive relief prohibiting Defendants from providing any further financial assistance for the project,” according to the complaints.

Court documents also reveal a legalistic, feisty and sporadically snarky battle royal between CART’s pro bono attorney, Dean Sutton, and five U.S. Department of Justice lawyers representing the Highway Administration, which claims, “(CART) wants to pursue time-barred claims … and future claims that bridge tolls are contrary to federal law which are not ripe. CART chose to intervene now because it does not trust the Plaintiffs. This does not make the Applicant’s motion timely.”

The Federal Highway Administration also challenges CART’s standing to intervene on the basis that it failed to file a member’s affidavit or declaration in support of its motion. CART maintains that’s not a requirement but attached three compelling sworn affidavits to its reply — all by board members in their 50s, each of whom claims, “I will be harmed personally, financially and socially if the Ohio River Bridges Project proceeds as planned.”

David Coyte, 58, a founding member “with increasing eye problems,” includes himself among the “demographic bubble” of baby boomers “that will be increasingly dependent on public transportation” and less mobile without it. He views the project as “the antithesis of a solution,” a diversion of the limited resources needed for “full access and participation in my community.” The expense of maintaining urban bridges, carbon constraints, the depletion of the world’s oil supply and related costs “must be addressed if we are to avoid a planning catastrophe and saddle a generation with inappropriate and unsustainable infrastructure,” he wrote.

Karen Kartholl, 56, who holds a bachelor’s degree in urban studies and a master’s in public management, says tolls are financially harmful where public transit is more cost effective. She wrote, “I believe that the ORBP will be destructive of the social fabric of our bi-state community and will devastate the vitality of Louisville’s urban core … I consider the ORBP to be a 20th century approach to a 21st century dilemma. It is doubtful that mine or anyone else’s financial situation will be helped by oil-dependent, high-maintenance, vehicle-centered projects such as the ORBP as planned.”

Billy Wright, 50, who holds numerous offices as an advocate for the disabled, wrote, “I am a blind citizen who uses public transportation for all of my daily and personal needs … My neighborhood is home to the Kentucky School for the Blind and has one of the highest populations of blind persons in the nation.” The project “will significantly increase traffic in our neighborhood, decreasing the walkability and therefore the quality and safety of our lives and our independence.”

As CART awaits the decision of U.S. District Judge John G. Heyburn II, the case remains in settlement talks among the plaintiffs, the Federal Highway Administration, the Kentucky Transportation Cabinet and the Indiana Department of Transportation.

But even the progress of those talks is in dispute.

“Federal Defendants desperately and misleadingly try to argue that settlement negotiations have gone so far in the case that to now allow CART to intervene would result in delay and prejudice,” writes Sutton, who claims the feds are fighting to exclude him because they “do not want another thorn in their collective side.”

The other local thorn, of course, is River Fields’ attorney Bob Griffith, who might as well have a PhD in the ORBP for his years of studying and strategizing.

Last October, I asked him if time was on his side in the quest to quash the East End bridge. “No,” he said, with a straight face. “I’ll be dead.”

With no clear resolution in sight, the mega-plan is aging with the population. According to U.S. Census Bureau projections, more than 1 million Kentuckians, or 23 percent of the commonwealth, will be older than 60 by the year 2020.